City of Brass is alright. 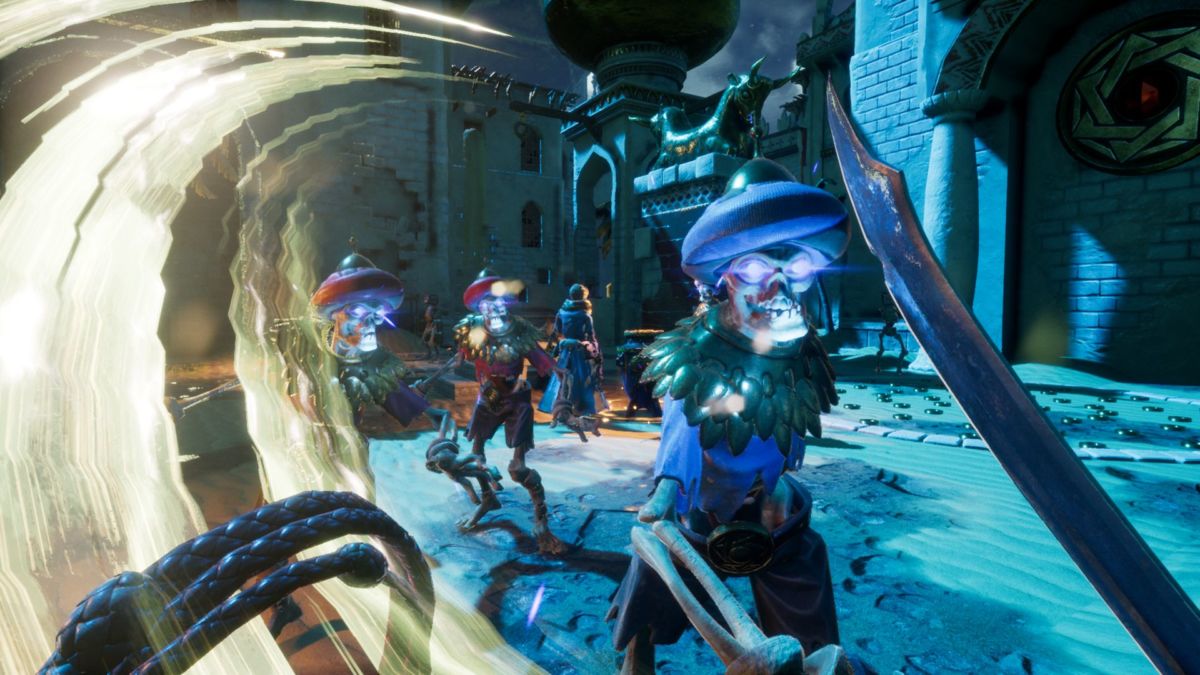 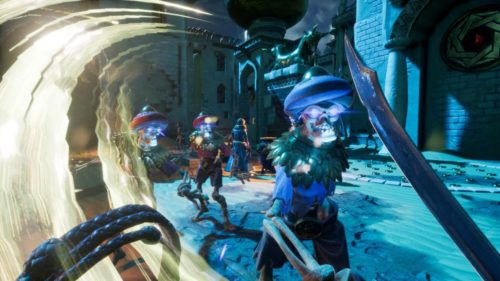 First-person roguelikes, while not entirely unheard of, are a somewhat rare occurrence given the rate at which roguelikes and lites keep coming out. City of Brass is just one such combination however and while it is by no means perfect it still has some neat things to offer Nintendo’s hybrid console.

Ever since Ubisoft sunsetted the Prince of Persia series, swashbuckling Arabian adventures have been decidedly pushed to the periphery. In this regard, City of Brass does not disappoint; the game is full of sun and moonlit bazaars, marketplaces, and courtyards which in turn are swarmed with genies, traps and evil skeletons to defeat on your way to wealth and glory. The whole thing obviously winks and nods to old adventure movies of the Harryhausen variety, which is something we don’t see every day in this medium. 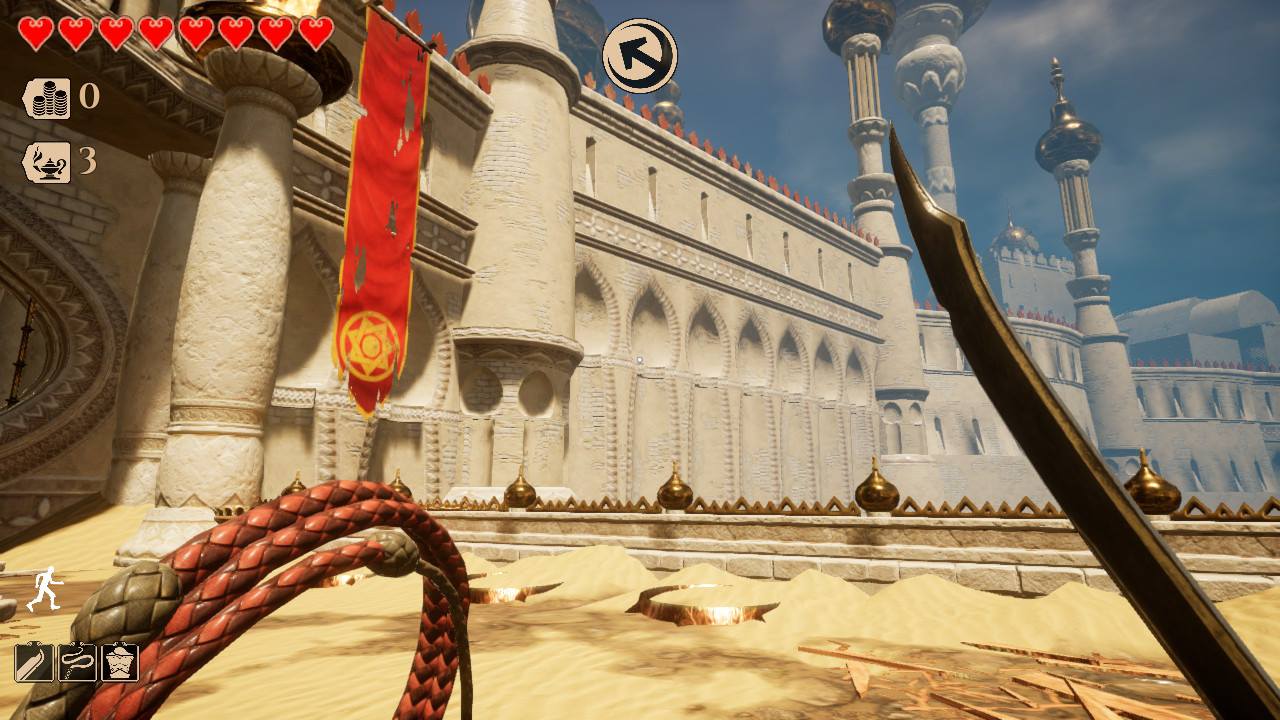 As with most games in the genre, the story is barebones and serves more to set the stage than to drive any narrative. An ancient and damned city has appeared in the desert and it is your job to relieve it of its riches. Armed with a whip, a sword and wishes three, you battle your way through the foul undead, traps and the occasional boss monster to reach the center of the city and get away with as much loot as possible. The levels are randomized, as is the loot and the enemies you will encounter. Each level will also grant you the ability to use your wishes or gold to receive upgrades or completely new equipment. In true roguelike fashion, you won’t know exactly what a new item, potion or weapon does until you have laid your hands on it, at which time it is entered into the encyclopedia.

So far everything is looking up City of Brass. However, it has one glaring problem: the combat, or more specifically, the controls and their lack of snappiness or precision. On paper, it should be fun, fast and dynamic combat with sword and whip in hand. The controls are not really able to pull this off though; the sticks prove to be just slightly too imprecise when you need to aim for specific parts on your adversary. At the same time, the overall sensitivity is a tad too sluggish when dealing with fast-moving threats or when there are a lot of them around. A quick and precise mouse would probably solve a lot of these issues, but as it is they have the stubby sticks on the Switch to contend with. 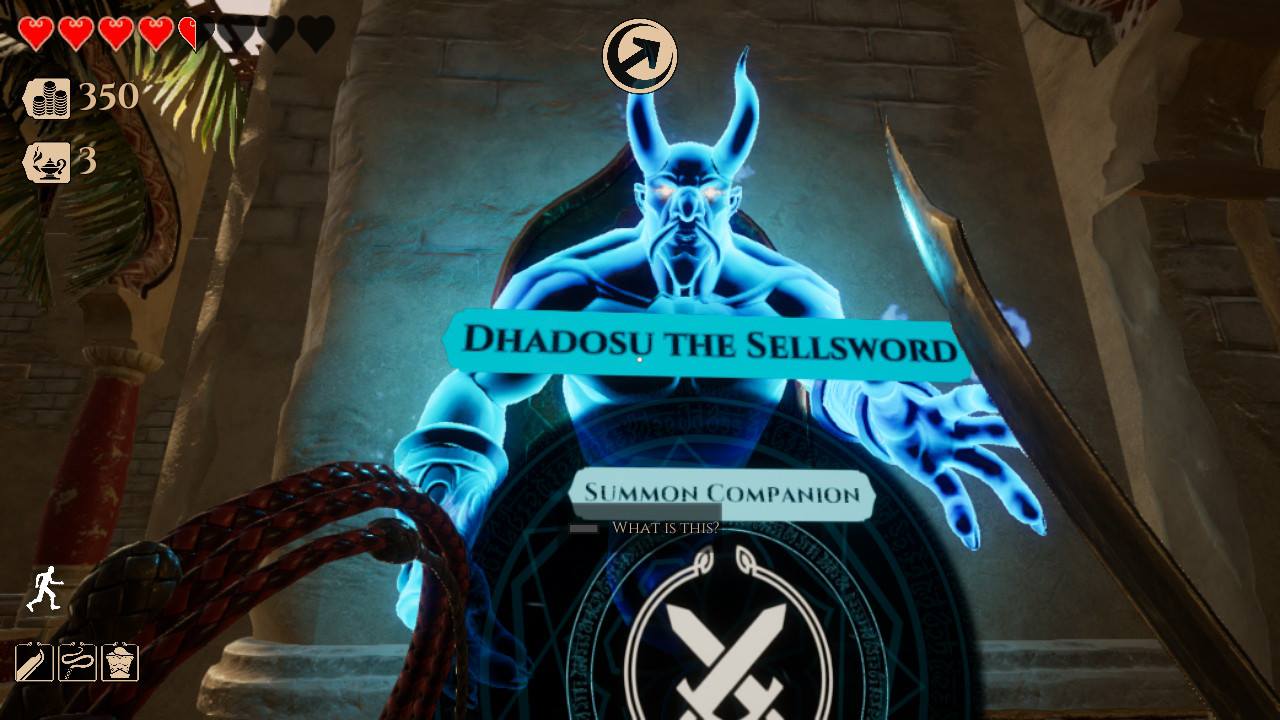 Fiddling with the sensitivity settings makes it better but the controls never really feel precise enough for what you are asked to do. The whip is the real star here, but paradoxically also suffers the most from the controls. It works as a stun weapon at a distance, whip the head of an enemy to stun or the hands to make enemies drop their weapons. Together with an ability to pull enemies towards you, the battles should theoretically become a quick and exciting dance around pitfalls and spike traps. When it works it is great and extremely satisfying, but I find myself mostly flailing around and fighting the controls as soon as a situation gets a bit demanding.

City of Brass can be a difficult and unforgiving game. The levels are stuffed with traps and enemies can lurk just about anywhere, and they love to sneak up on you, especially the fast-moving armless bastards you encounter early on. On top of this, the levels have time limits, which together with the somewhat clunky combat can make for a very foul-tasting mess. Luckily there is a generous system of Divine Blessings which you can use to tailor the experience to fit your playstyle. Like to explore freely and leisurely? Remove the time limit. The traps kicking your ass? Reduce them. Likewise, you can unlock punishments if you want the gameplay to get even gnarlier than it is. But even with the blessings turned on, City of Brass can be a really demanding game. You will more than once find yourself circling enemies only to step right into a spike trap, open a door to fall down a pit, or worst of all, get knocked into something by those armless assholes that come running straight at you. 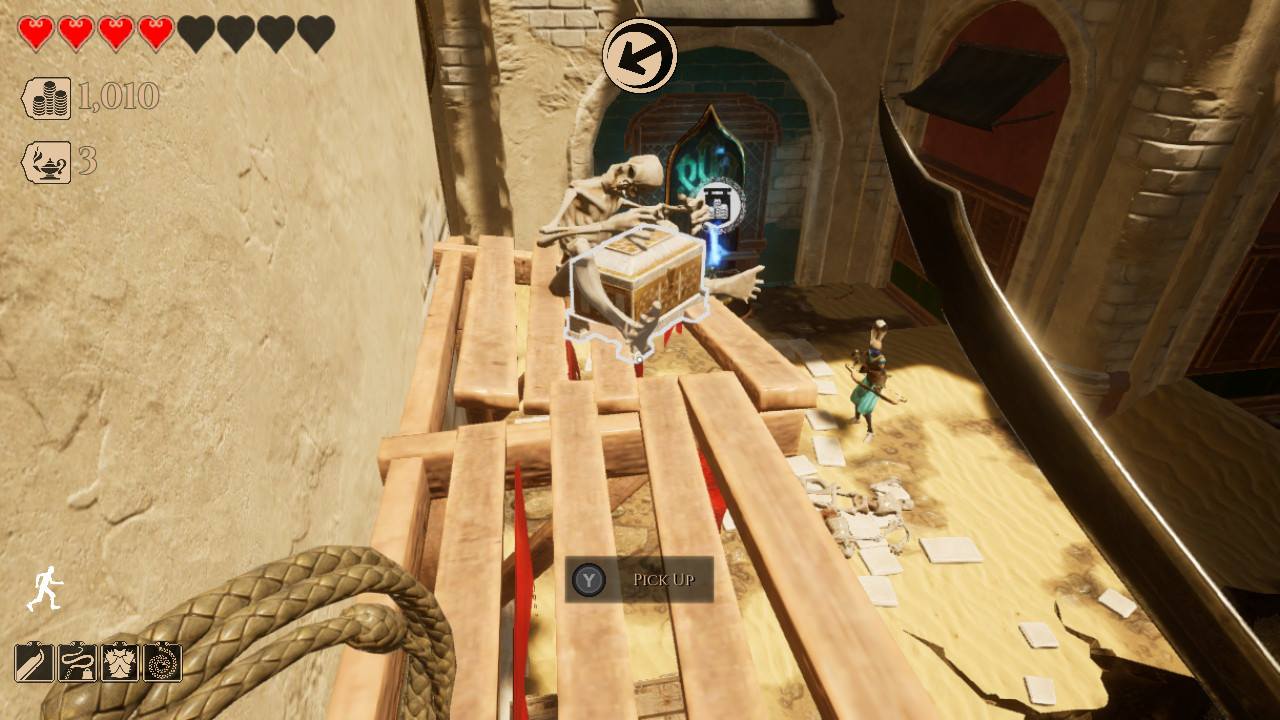 Graphically, the game looks decent to great on the TV and the lighting and effects have transitioned especially well over to Nintendo’s platform. The moon makes everything sparkle in silver and in daytime the sun bathes the city in burnished gold. In handheld mode, however, the game tends to look a bit flat in a way that I can’t really put my finger on. It probably has to do with lower resolution and perhaps even some removal of shadows and light sources, but it just doesn’t pop the same way as it does on the TV. Another thing about the overall presentation is that it can be a little bit repetitive. Areas don’t change all that much and the enemies are equally similar throughout the runs you do. It’s a shame since I like what is there but just wished there’d be more of it.

Sound design is decent but nothing that will stick with you, except for the extremely satisfying whip crack. The lack of any real music feels especially poignant and makes the areas unnecessarily glum and eerie at times. I suppose it does allow you to hear threats and traps ahead of you, but it clashes a little bit with the swashbuckling and lighter tone the game has otherwise.

City of Brass is a game that mostly succeeds at what it wants to do. It has well-implemented roguelike elements, there are a ton of secrets and hidden items and things to discover throughout your runs in the damned city. There is also a decent sense of progression which mitigates the “bashing my head against the wall” feeling these games sometimes have. The whip is additionally a well realized and fun weapon to use, albeit hindered by the lack of good controls. The Switch is also a very good platform to play these kinds of run based games on as a level seldom takes longer than 5 minutes to clear; perfect for the commute or a moment of contemplation on the porcelain throne. To have all these great elements, it is a real shame that one of the core pillars of its gameplay, the combat, feels so sluggish and hard to deal with.

Verdict
City of Brass is a fun and swashbuckling adventure that gets seriously hamstrung by its clumsy and sluggish controls. Recommended to any masochist out there who wants to get punished on the go and doesn't mind looking past some issues.
7