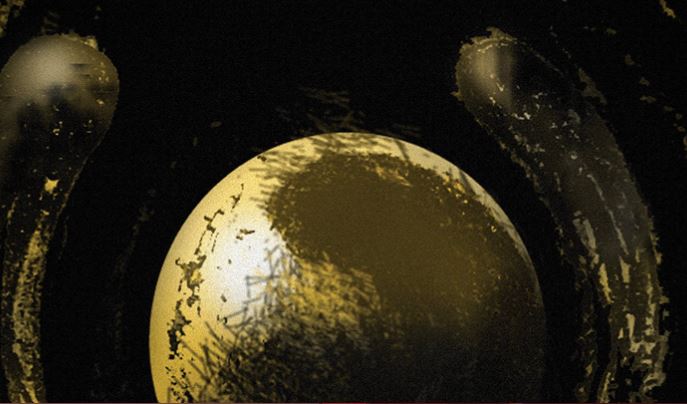 “My eyes shifted, looking around the dark space surrounding me. This cave, judging by my flight time down, had to be near the bottom interior of the giant landmass floating around our world’s core: a fragment of what once was the crust of a planet. Dozens more orbited at higher altitudes, each with a citadel on it and a population of survivors now grown to full-sized civilizations.”

Brian Guthrie’s debut novel Rise takes place in the far future when the Earth has cracked apart into fragments called shells. The shells are held together by a water shield and an ancient computer network. A scribe named Logwyn learns from the Queen of her shell that the network is breaking down, threatening to wipe out the remaining population. She’s assigned to find four people who may hold the key to stopping the end of the world. She sets out to search for them and, through them, learns the history of what started the degradation of the network.

Rise creates an interesting dystopian world that mixes science fiction and elements of fantasy. The nature of the world also gives it some elements of space opera, with conflict between the shells working much in the same way as a conflict between different planets would in other stories. Creatures known as dragons are also present. The nature of them is not explored much, as the mystery of their behavior is an important part of what propels the plot forward.

Guthrie sets up an intriguing premise and a lot of mysteries. Logwyn is largely in the dark about what is happening and works as a stand in for the audience. Because of this, mysteries that would otherwise feel contrived are more convincing. Much of the story is told from the perspectives of the characters of Micaela and Quentin who Logwyn seeks out to find what she’s looking for.

One of the problems with the book is that while there are three narrators, they have essentially the same voice. Logwyn has little personality to speak of, and Micaela and Quentin don’t sound much different in their own chapters despite how they’re set up. Quentin is introduced as suffering from some type of PTSD from his experiences and Logwyn describes him as rambling and flying into rages, but he’s perfectly lucid in his narrations. This can be somewhat forgiven as Logwyn makes clear that she’s editing their stories for readability, but it still seems like a missed opportunity to do more with the narration voices.

Rise was originally published in serial form on the website JukePop. This is rather obvious in the breaks in the narrative, though for the most part it’s not too distracting. There are, however, several points where the interruptions in the narration felt unnecessary. They contributed nothing to the story other than for Logwyn to ask a question and for the person she’s speaking with to basically tell her, “I’ll get to that.” This might make sense in a serial which need a certain stopping point, but here it could have been edited out.

Despite the novel’s problems, I still found myself highly engaged in the story. Besides the interesting world, Guthrie keeps the action moving along at a steady pace. The novel doesn’t drag at all and it keeps setting up further mysteries to keep the reader interested. It’s the first book in a series, so it doesn’t answer all the questions. In fact, it answers very few. Given that it’s book one, that’s not a bad thing at all. I wouldn’t go out of my way to find the future installments, but I wouldn’t be at all opposed to picking them up at some point.

Verdict
Rise is a flawed but entertaining sci-fi page-turner and a promising set up to its series. It's an ambitious book that doesn't accomplish everything it sets out to do, but it certainly won't bore you. I recommend it, especially to fans of science fiction and fantasy.
7
Cultured Vultures is a pop culture website established in 2013 covering all things gaming, movies, and more. We eat your words.
All The News On The Biggest Games