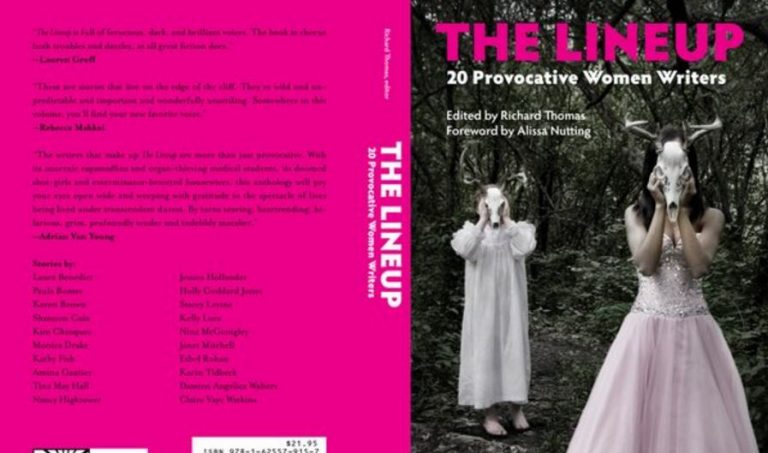 Recently released by Black Lawrence Press, The Lineup brings together the works of twenty contemporary women writers into one spellbinding anthology edited by Richard Thomas. Raw, sexual, and mesmerizing, the stories encompass life as a whole, never shying away from the dark or the disturbing, which results in a gripping experience for the reader. Although united through common themes, the ways in which the writers employ them vary widely. There are stories working within sorts of fantasy or magical worlds while others are painstakingly real. No matter what the topic is – from marriage to separation, from finding to losing – the writers of this anthology nail it every time. Just as the cover promises, the collection is provocative in the complete sense of the word.

Alissa Nutting, who gives the anthology a foreword worth the reader’s time, captures the feeling of reading these stories when she writes that provocative fiction, “contains at least one thing that is chilling and repellant that the power of the text forces us to move through despite our reservations…I need provocative fiction because it helps me remember I cannot ever fully protect myself.” This anthology wastes no time at all in slamming the reader with this inescapable feeling and continues to do so again and again with each of the pieces.

The opening story, “Parts” by Holly Goddard, is a heartbreaking and frightening tale guiding the reader through the crumbling life of a mother whose only child is murdered while away attending college. Following in the same vein of motherhood are a number of other stories scattered through the collection. “Lifelike” by Ethel Rohan is a brief, but eerie, piece in which a wife begins a doll collection and becomes attached to the dolls as if they were alive, even quitting her job to be dedicated as a stay-at-home mother. While keeping the theme, but taking a completely different angle, Karin Tidbeck’s “Jagannath” tells an almost dystopian story in which the Earth has become so inhabitable that a mother adapted to keep her children within her body and a symbiotic relationship is shared between them. This story’s meaning goes beyond just a strange science-fictionesque world and works in playing with the role of women in society’s jobs and ideals. Another example is “Stillborn” by Karen Brown in which a pregnant wife and her husband move into a house whose occupants had recently passed away. While planting flowers, the wife digs up a shallow grave containing the bones of a baby, which prompts the uncovering of the story of her new neighbor.

The Lineup tackles other controversial and important topics, such as eating disorders in Tina May Hall’s “Skinny Girls’ Constitution and Bylaws,” sexual assault of young teenagers and women while working with drugs, societal pressures, and other factors in Kim Chinquee’s “Shot Girls” and Claire Vaye Watkins “Rondine al Nido,” as well as complications of relationships because of job loss, life changes, pregnancy, and meeting new people like an alluring bug man in the stories of Shannon Cain, Nancy Hightower, Jessica Hollander, and Laura Benedict. There are no limits for material in this collection – everything is fair game and, no matter how unsettling it may feel to read, you won’t be able to stop.

While it is nearly impossible to completely capture what each of the stories brings into this anthology in a short review, I can say that you will find yourself glued to this book, flipping through the pages in excitement of the possibilities of what the next page or next story might hold. The uniqueness of the stories themselves as well as the voices of the writers brings a freshness into the anthology, preventing it from ever feeling hackneyed or repetitive. If you are looking for a solid sampling of today’s thought-provoking female writers, this is your place to start.