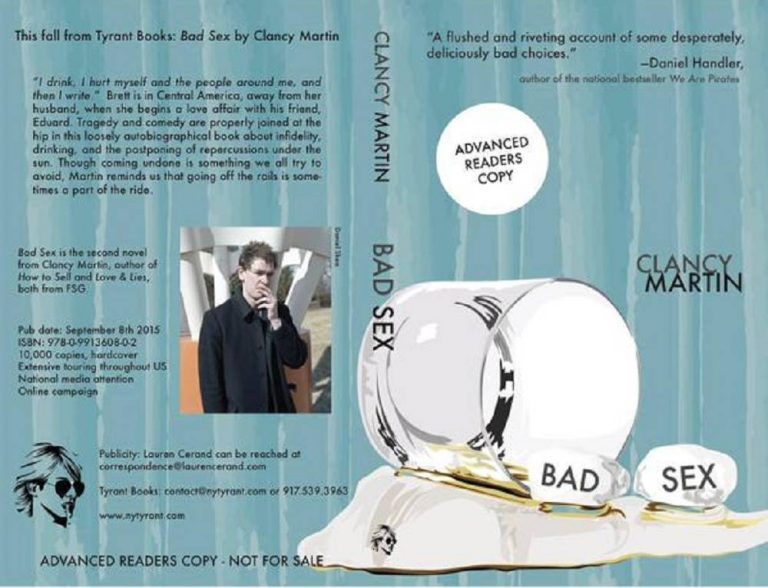 Ever wanted to read the downward spiral of a recovering alcoholic who’s also cheating on her husband with his banker? Well, ‘Bad Sex‘ by Clancy Martin delivers that in a spectacular fashion. Spectacular fashion meaning a complex take on the collapse of a loving marriage through an affair built on passion and thrills.

The story centres around Brett who’s married to Paul, a nice guy who she loves, and whom she sees his two sons as her own. They’re rich. They own resorts and hotels all around Mexico City. And Brett is also a writer who’s working on her second novel. A pretty great life, right?

Well, nothing’s perfect. Especially when she meets Eduard, Paul’s banker, and is seduced by his handsome looks and cool demeanour. From that point on we embark on a ride that you know it’s only going to end in disaster, but you just can’t look away, even after you’ve met the edge of the cliff and all its left is the remnants of the train wreck.

The book is told only by Brett’s viewpoint, who narrates her story in first-person. Which, at times, made me question if what she saw happened actually played out the way she told. Not sure if this was the author’s intent, but I wasn’t sure if I could fully trust Brett throughout the book. I don’t think she even meant to twist facts or behaviours, it’s just a sad fact that we all think we’re the centre of the universe and only see things through our perception. We don’t get to switch eyes with someone on the outside, we just perceive what we want to perceive. Include that with Brett’s alcoholism and you can see why I’m wary to believe every word she says.

Perhaps she wasn’t even seduced by Eduard and led astray right into the bottom of a bottle. Maybe she just wanted a drink and saw the events of her affair as a sign to go for it and fall through the rabbit hole once and for all.

This works in a lot of ways. Since Brett is the only one speaking, she’s the one whom you spend most of the time with, and soon you stop seeing her as an unredeemable cheater but as – gasp! – a complex human being with flaws like any other person out there; not worse or better.

I confess, at times I just hated her, then I pitied her, and, finally, I become to empathise with her and started seeing a little bit of myself in Brett.

It was scary in the sense that it tore down my walls and left me vulnerable. This type of situation, a heart-breaking disaster accumulated on top of mistake after mistake, can happen to anyone. And you might see it coming, or you may not, but the cold hard truth is that none of us are the perfected versions we display and try to be. We trip, we fall, and sometimes we don’t get back up. It’s life. Life sucks sometimes.

The other thing I liked about the book is that even though Brett claims she fell in love with Eduard, she also still loves her husband Paul. Perhaps with a talk of polyamory this kind of relationship could’ve worked out, but then Brett kept lying, and thought she could only be with one man.

In today’s society we’re told that a two-way marriage is the golden mile, you can’t love two people at the same time – you have to pick one. Now, I’m not claiming a polyamorous relationship is better than a monogamous one, but if people could just admit that it’s possible to share love with more than one person, perhaps these stupid love triangles could resolve themselves rather quickly. Of course, not everyone is cut out to be in a relationship, let alone a relationship with more than two people.

Paul, Brett and Eduard might have never worked out and the end result would still be the same. But they didn’t even at least try. And that to me is in itself a tragic occurrence; when love doesn’t get the chance to bloom.

Of course, there are things that irked me along the book. I could see the ending coming a mile away, and all it left me was a deep sense of dread and hopelessness. I’m lucky to be one of those that loves the dark psychological take on human relationships, but if I wasn’t I would’ve probably hated the book.

Clancy Martin is a philosopher first and a novelist second, I would say. He didn’t made this book to please people, and I guess that’s what makes me love it even more. It was created for the purpose to make people think about their own relationships and society around them, to analyse and wake up at 3 a.m. with an existential crisis because the novel is still well seated in the corners of your mind.

You know what, I take it back, I loved this book through and through. Go buy it if you want something with more substance and thought provoking than your regular ‘Fifty Shades of Grey‘ copy; of course, that’s almost any other book out there, isn’t it?