Home
Books
BOOK PREVIEW: ‘I Will Rot Without You’ by Danger Slater
Books
·3 min read

BOOK PREVIEW: ‘I Will Rot Without You’ by Danger Slater 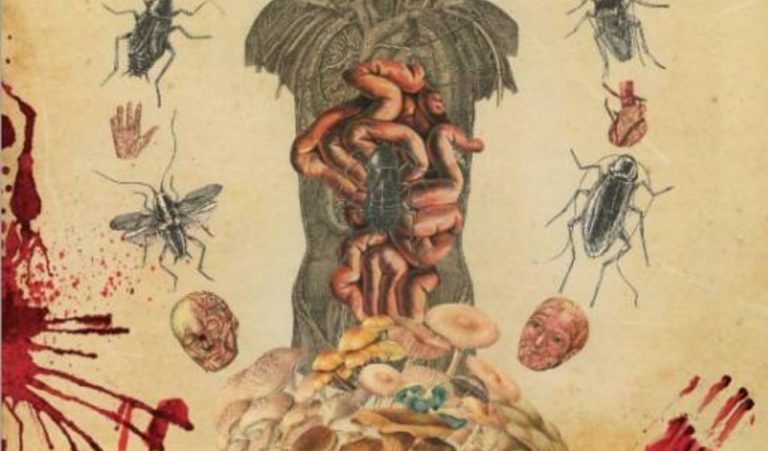 Cockroaches fill up my life like raindrops in a reservoir.

The little fuckers are everywhere. I can’t get away.

I’ll find ‘em in the bathtub. Under the sink. I’ll pick up a box of cereal and one’ll scurry out from underneath. It’ll sail like a black marble across the countertop before disappearing behind the microwave. I’ll find ‘em in the bedroom, under a pile of dirty laundry. In the living room, nibbling on the pages of a year-old copy of Good Housekeeping like it were a filet mignon. I’ll find ‘em in the refrigerator, my shoes, beneath couch cushions, under throw rugs. I’ll find ‘em inside cabinets, closets, cupboards and drawers. I’ll find ‘em tucked into every corner and every crevice, behind every awning and every appliance. Ubiquitous. Pervasive. Inescapable. They are beneath the carpet that’s beneath my feet and above the ceiling that’s above my head. They populate the darkness. They impregnate the night. I’ll flick on the light and dozens of  ‘em will scatter off in every direction. They‘ll flee like I just dropped napalm on their ink-black village.

Sometimes I’ll wake up and find one of ‘em sleeping next to me. On my pillow. Just inches from my nose. Its wide eyes like clumps of charcoal pointing at nothing in particular as it dreams its dreams of fetid meats and human refuse and mountains of garbage piled up so goddamn high that the rotten tower stabs its way through the bottom of the thermosphere to lick the asshole of the Moon.

For 280 million years cockroaches have been spreading their particular brand of pestilence across the Planet Earth, but it was only six months ago when I first noticed them creeping around my apartment. They’re resilient. Relentless. Seemingly invincible. They existed long before people came around, and they’ll undoubtedly exist long after we’re gone. If I do nothing, if I allow these pests to remain here unchecked, I have no reason to suspect they won’t continue to infest this building I live in for the next 280 million years.

I’m lying in bed. Lying perfectly still. Looking at this disgusting vermin sleeping peacefully, fearlessly, right next to my head. It’s to the left of me. On the side of the bed where Gretchen used to lay. In a weird way, I’m kind of jealous of it. It has to know it’s a reviled little thing; that its mere presence is the inspiration for shrieks and shudders and great swooping swats from rolled-up newspapers. It has to know that humankind has been gunning for its blood for hundreds of centuries, and yet, a cockroach never seems to care. It just eats and shits and then scuttles off without any grander sense of purpose, and when it’s done having its repulsive fun, it brazenly plops its awful head down right next to mine and slips off into a dream like it were the CEO of Not Giving a Shit Enterprises. For me, sleep doesn’t come easy. Not anymore. And when it finally does come, it merely passes through me as transiently as the breeze that passes through the tops of the trees. There’s nothing to hold on to. Just air.

For me, sleep is just a series of extended blinks. And as I lay there, I like to pretend I’m not a monster, I like to pretend I’m better than this simple bug, but the truth is that there is no respite for a creature like me. It’s in those brief and tortured moments, when my eyes finally close and my brain shifts clumsily into autopilot, that the shadows start to dance in my head. It’s the place where memories refuse to die. Memories like cockroaches themselves. It’s the place where I can still see her…

Even this insect gets to rest. It’s just not fair. Maybe I’ve got it all wrong. Maybe they belong here. Maybe this is their apartment. And I’m the one infesting it.