BOOK PREVIEW: High In The Streets by Matthew Binder 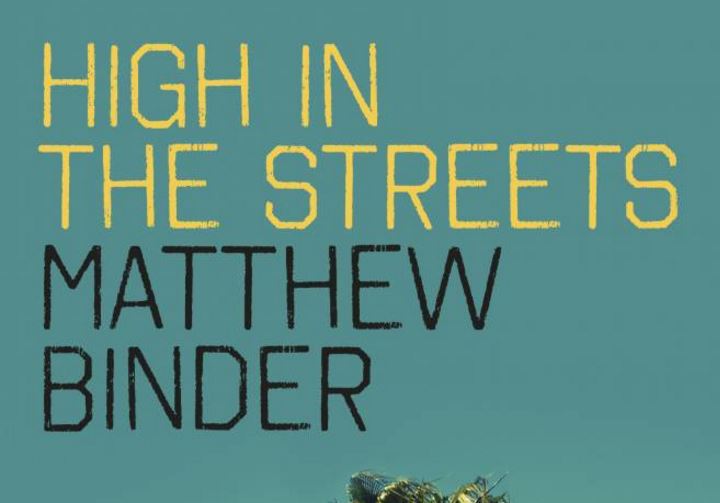 The following is an excerpt from Matthew Binder’s debut novel, High In The Streets. It is available later this month through Roundfire books.

There is a neatly folded blanket and pillow for me on the couch. I lift the pillow to my face and give it a sniff. Remnants of Frannie’s vanilla-scented shampoo cling to its case. A wave of gut-wrenching emotion passes through me and I stand there crippled by a combination of tenderness and confusion. I walk from the living room to the kitchen in a daze. It’s a struggle just to place one foot in front of the other. I pour myself a whiskey and drink it down. It doesn’t feel sufficient, so I pour another and then another and another and so on.

I awake in the morning with Frannie standing over me. She’s speaking to me, but I do not understand any of her words. My head is dull and pulsing, and my body is shaking violently. There is a small puddle of blood all around me, and the ground is littered with flower petals. I wonder what has happened: Am I injured? Is Frannie trying to kill me? Did I attempt suicide?

I struggle to my feet. Every glass, vase, bottle, and shoe in the house is spread out across the kitchen, overflowing with haphazardly arranged bouquets of both exotic and regional flowers. I turn myself around in a circle to take in the sight. It’s the single greatest bounty of pinks and reds and blues and yellows I’ve ever seen.

“Is this your idea of an apology?” Frannie asks.

“You’re impossible,” she says, pointing her finger toward the front door. “You need to go outside. The police are waiting to speak to you.”

“Go find out for yourself,” she says.

It’s a terrible struggle to walk. My limbs aren’t under the control of my central nervous system. The legs keep splaying out to the side, and I can’t manage to coordinate which arm is supposed to swing forward with each step. I stumble from one support object to another. At the front door I’m greeted by two lawmen. One is old and grey and grossly pot-bellied. The other is fresh-faced, with very closely cropped hair and an imperious look in his eyes.

“Good morning, officers. What can I do for you today?”

“You the home owner, sir?” the fresh-faced cop says.

The older cop looks at me questioningly. “We’ve had complaints from several of your neighbors that their gardens were ransacked during the night. We came out to investigate, and it seems every house within a half-mile radius has been affected but yours. You know why that might be?”

I glance over my shoulder, back into the house. There are several conspicuously ill-placed flower adornments positioned on the ground in the foyer. I step outside and close the door.

“I don’t know anything about that. That certainly is odd, though.”

“Come see for yourself,” the younger officer says, holding his hand over his eyes to shield the sun, looking out toward the closest neighbors’ front yard. “The Millers’ prize rose bushes are in ruins.”

“And over there,” he says, pointing in the opposite direction. “The MacGregors are devastated over the loss of their hydrangeas.”

“They had quite the botanical wonderland over there.”

“So you don’t have any theories on why someone would destroy all the gardens of all the homes around you, but spare yours?”

An intense bout of nauseas strikes me, and I vomit at everyone’s feet. The fresh-faced cop reaches for his gun and the fat cop rushes between us. “Take a walk,” he says to the younger cop.

“I’m sorry, officer…” I squint to read the fat cop’s nametag, “Boyles. I’ve been sick as a dog all morning.”

“You mind if we take a look inside?”

The cop moves closer to the front door. “Sir, if you have nothing to hide, there shouldn’t be any reason for you not to let us in.”

I move between the door and the cop. “I know my rights,” I say. “Now if you’ll excuse me, I have a very busy day ahead of me.”

“This isn’t over. Someone must be held accountable for the damages.”

I open the door enough to slip inside and then poke my head back out. “I hope you catch your crook, gentlemen, but I really must be going.”

I move from window to window inside the house, drawing the curtains shut. Peering out, I can see the two men arguing. There is a lot of gesticulation with the hands, culminating in the fatter cop reaching out and removing the gun from the fresh-faced cop’s holster. Finally they get back in their squad car and leave the premises.

Frannie is waiting for me in the kitchen. She’s got the sternest of faces on. I’m feeling positively jubilant about my victory over the police.

“You don’t really think you’re going to get away with this?” she says.

I plant a kiss on her mouth, and she bristles. “Those guys aren’t going to do anything.”

I keep attempting to get close to her but she rebuffs my advances, using the classic football stiff-arm technique. “You really think you outsmarted them?”

“If those men had any intelligence at all, they wouldn’t be police officers.”

Frannie’s face softens and then in an empty, hollow voice she says, “You’re already in enough trouble. Why would you do something so foolish?”

“You don’t think it was a romantic gesture?”

“You destroyed thousands of dollars’ worth of people’s property.”

“You need to get rid of all these flowers.”

She picks up a wine bottle I’ve stuffed with tulips. “Have you noticed all the bees flying around the house?”

I listen carefully and my ears detect the ominous drone of buzzing.