Arkangel is the second episode of the fourth season of the Netflix exclusive dystopian thriller Black Mirror. This review is slightly self-indulgent, but indulge with me—the nature of this episode calls for a different approach.

I must preface: Arkangel is worth watching fresh (without spoilers)—its intricacies and its faults shine through this way, as most of the show won’t explicitly state where it’s going next. It’s entertaining enough for recommendation, and it’s less than an hour long, so you can (though you don’t have to) hop onto Netflix and stream this bad boy before reading the rest.

Heavy spoilers beyond this point. We’re diving straight in.

Arkangel begins with a birth. A mother is having a baby and is shown to have complications severe enough to warrant a C-section. They extract the baby but it appears to not be breathing. Multiple doctors rush to the table and surround it, blocking all view. The mother, obviously terrified, pleads for the baby to be okay. The camera cuts from the doctors’ backs, to the mother, then back to the doctors. The baby is hidden from view for a relatively prolonged period of time.

Suddenly, the newborn breathes. The doctors turn around and return to business.

This screams for an obvious twist, right? The newborn goes off-screen for some time, so, while you’re distracted worrying about him, you don’t notice he’s been toyed with somehow. It seems like an obvious tell when enough movies already employ similarly sneaky-yet-blatantly-noticeable moves. This is like playing poker with a show that hasn’t noticed we’ve already memorized the deck order.

The next sequence of Arkangel features Sara, the baby we were just introduced to, only she’s three years old and frequents the local park with her mother, Marie. They walk by the neighbor’s dog who is violently barking through the fences, scaring and surprising them both. This can’t be the first time they’ve walked to the park, so why didn’t they know the dog was there? Had he never barked before? Why now, just randomly? Did the neighbor just move in? Did they follow a different path out of the house? This feels reminiscent of Deadly Premonition: Director’s Cut, as if the dog is warning Sara or detecting a strange evil within her.

Sara and Marie arrive at the park, and Sara starts jumping and sliding all over the playground constructions until she finds a cat. Marie is distracted with a friend, and when she turns around to call for Sara, Sara has disappeared. Sara’s not only gone for hours, but there’s a full-on, county-wide search—no worries, since she’s found almost immediately, before any of the drama registers and we can move on with the episode as if nothing happened. What was the point of that entire sequence? Again, Arkangel manages to both subvert and disappoint, implying a bold-faced tell that something strange happened when she was taken without fully delivering.

We then watch Sara being injected in the skull with some kind of implant that Marie seems apprehensive toward. They’re in a sleek, shining, squeaky-clean doctor’s office deep in some mega corporate conglomerate building. Ok, this is it. This is where the shit hits the fan. That injection was probably some mind-controlling device that the company owns, right? Or some horrible genetic mutation that’ll melt the daughter into a freakish blob monster?

No? Not even a little bit?

The expectations only increase with a montage of Sara and her mother playing, all bubbly and whimsical, fluttering free from the problems of the world. We should feel bubbly with them, as they’re enjoying each other and being wholesome and carefree, but it’s implying that something horrifying is will soon happen to the daughter. To some extent, our expectations pay off, but not in the most satisfying way.

The skull-injected implant turns out to be a device that Marie uses to not only monitor Sara’s location, but also to alter what Sara sees, effectively censoring the world. These parental controls blur Sara’s vision when looking at potentially “offensive” or “shocking” things.

At first, Marie utilizes the implant’s censor feature to blur the black dog that was barking at them—after all, it would be a pretty nerve-wracking moment for a three-year-old. Then the episode skips seven years ahead, when Sara is now visibly more mature, and the mom is even more uncompromising with the censorship than before. They’re at a funeral and Sara can’t see her mother’s tears. At home, Marie has a camera pointed at everything Sara does. Her daughter has no free will, bound to follow her mother’s every whim.

This is a pivotal and subtly executed sequence that almost manages to deliver a solid episode. Regarding all previous predictions, Arkangel absolutely fooled me. For one, it creates this interesting moral dilemma in Marie, asking whether or not any parent deserves that kind of control over what their child sees. It also makes sense as to why the mother would choose this—she has been dangerously close to losing Sara twice now, as well as having her near a potentially deadly situation (grandpa’s collapse). She’s terrified of the outside world and will go to extreme lengths to protect her child from it.

Sara is older and more curious about blood and gore, as she attempts to draw a picture of a man’s head blowing up but her implant prohibits her from seeing the image through crude sketches. She then sharpens a pencil and pricks herself in the finger, where red ichor flows and, as expected, all she sees are pixels. Sara snaps at Marie on the way to a psychologist.

The name of the implant plays nicely here with its primary function—the device is fittingly called the Arkangel, “a protector of life”. Marie decides to turn off the Arkangel, wanting to believe that letting Sara live more independently is a good thing. As is typical with Black Mirror, Arkangel exemplifies believable reactions and thought patterns, the characters becoming more layered by the minute.

The episode skips ahead, showing Sara as your typical fifteen-year-old, cheerfully drowning in indie and goth culture. She’s excited for a party one night, since Trick (now older and with a car) will be there, and there’s a chance of something special between them happening. She lies to Marie and goes to the party. What follows is the best sequence of Arkangel by far, a creative implementation with POV in the story.

Marie digs out her old Arkangel device and tries to locate her daughter. The mom catches Sara having sex with Trick, getting a screen full of an orgasm-face and Sara saying, “fuck me harder” with more spice than a cam-girl. The scene plays out less heart-wrenching, more darkly comedic. At this point, with our previous expectations of the episode having been subverted, all the pieces are in place. Now is when Black Mirror typically descends into madness. 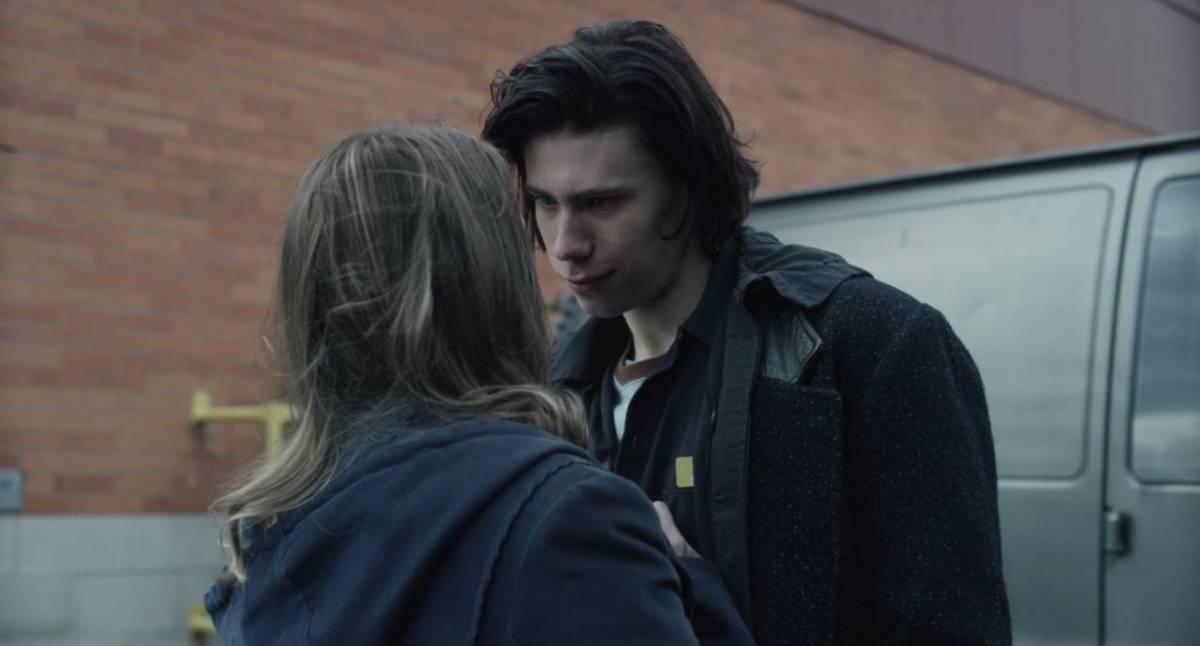 Marie catches Sara again through the Arkangel. This time, Sara is snorting cocaine with Trick. Marie confronts Trick violently, scaring him off from Sara.

How will this spiral into crazy? Will Trick pull a masterful escape with Sara as Marie chases after them using the GPS? Will Marie lock Sara within her home and slowly drive her insane, resulting in Sara killing her? Maybe these ideas sound gruesome, but Black Mirror has set a certain precedent. The pay-off doesn’t have to be hardcore action, but something blood pumping and intense is expected at this point, especially going into their fourth season.

Arkangel was a slight disappointment in the end, despite a few redeeming moments. Its biggest sin was having too much potential. The midsection was solid, employing a few creative ideas utilizing the premise to craft interesting scenarios and building up to what was looking to be an enjoyable climax, but, as a whole, Arkangel was underwhelming.

Marie covertly crushes a contraceptive pill and mixes it into her daughter’s smoothie, and when Sara finds out she beats the ever-loving shit out of her mother’s face. But the depths of madness and despair stop there. The potential seems wasted on tame consequences—Sara’s upset, so what?

Maybe it’s not fair to expect a darker turn, even if it is Black Mirror, a show that has previously ended episodes with its main characters in prison, in comas, going insane, or dying. Sadly, it’s a bit disappointing to see such a pedestrian story in a show that has had no qualms with falling into murkier pits.

All that being said, as a self-contained story, Arkangel works as well as it needs to. Its tameness benefits its realism. We can believe that a jittery, anxious, overprotective mother would go to these lengths to protect her sole daughter, especially after fearing her safety from the moment of her birth. Sara’s reactions are equally fitting. A socially strange, careless teenager would lose their cool in a situation like this and attempt an escape. However, Black Mirror isn’t the kind of show we’ve come to expect walking away and think, “That was everything I expected.”

The cinematography is sadly stale, utilizing standard shot/reverse shots, flat pans, and a general lack of agility. Some scenes feature a POV shot, but they are used seldom and, more often than not, end up feeling awkward within the sequence.

The ending sequence, where Marie lifts her head up after Sara smashes her face and turns to stare at the broken Arkangel, looks ridiculous. The camera itself is so large that, when the mom turns, it seems as though her head is 3 feet higher than the ground.

Overall, Arkangel is on the lower-end of Black Mirror episodes and, by far, the worst episode of Season 4 so far. Hopefully, the next episode, Crocodile, has more bite to it. Arkangel is not for the more depraved Black Mirror viewers, but it will entertain.

Verdict
Arkangel constructs a premise too promising for its own good, one it cannot possibly satisfy in the end. Despite its unfulfilling results, the realistic dialogue, the weighty motivations, and the nail-biting development make for a fascinating exploration of the human psyche which fuels questions that are still relevant today and probably will be for the future.
6
Cultured Vultures is a pop culture website established in 2013 covering all things gaming, movies, and more. We eat your words.
All The News On The Biggest Games