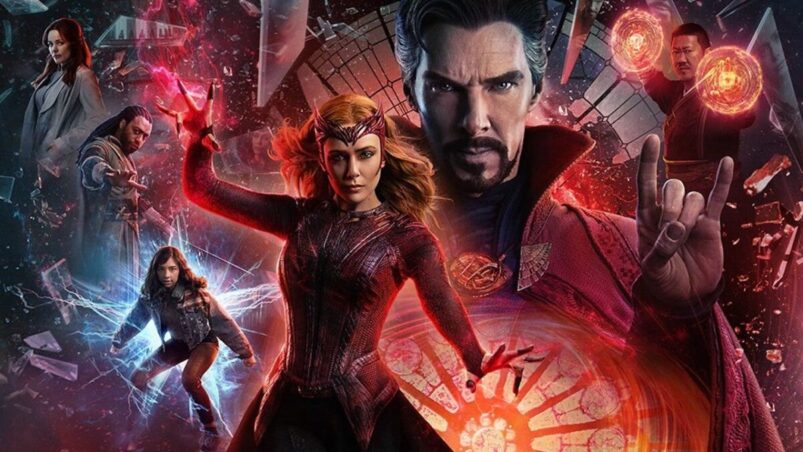 Doctor Strange in the Multiverse of Madness

April 2022 had plenty of exciting movie releases: there was Michael Bay’s Ambulance, Robert Eggers The Northman and the meta Nicolas Cage movie The Unbearable Weight of Massive Talent. May 2022, on the other hand, is a tad less exciting.

I mean, there’s some good stuff, don’t get me wrong, and fans of the MCU are certainly writhing about in anticipation. The A24 move gang will also be especially pleased, considering how well-fed we’ve been this year thus far. Overall, though, movies releasing this month are a bit more niche, which may or may not work for you depending on your taste.

Here are the biggest new movies of May 2022.

I think the most exciting thing about Doctor Strange in the Multiverse of Madness is that it’s helmed by Sam Raimi. Raimi is known for his work in horror, but of course most would know him for the first trilogy of live-action Spider-Man movies with Tobey Maguire in the titular role. Raimi hasn’t directed a feature film since Oz the Great and Powerful in 2013, so it’s great to see him back in the chair once more, taking on a superhero movie again, now made all the more complex since the multiverse is involved.

The last time we saw Doctor Strange was in Spider-Man: No Way Home, and most likely, this film will probably have to deal with the fall-out regarding his spell. The multiverse brings one into contact with different versions of an individual that exists across the universe, as we saw from Loki and Far From Home, and most of the time, their agendas are aligned. But what if they’re not?

The film is categorised as fantasy/action, but there are some undeniable horror elements present just from watching the trailer alone. Hopefully, Raimi brings something new to the table for this addition to the MCU slate.

If you take the two movies Never Been Kissed and 13 Going On 30 and mash them together, you get Senior Year.

Stephanie (Rebel Wilson) is the most popular girl in her high school. She’s the captain of the cheerleading squad, dating the quarterback and is well on her way to becoming the prom queen. She has it all until she falls off the top of the cheerleading pyramid and goes into a coma. 20 years later, Stephanie finally wakes up from her coma, only now she’s a 37-year-old woman.

She goes back to her high school and tries to assume her role as the star of her school, but the rules aren’t exactly the same anymore. Does she still have what it takes to be prom queen? Tune in to find out.

Senior Year will be released on Netflix.

I stopped watching Downton Abbey because I was too heartbroken to carry on, but if you did continue, then this new movie should be right up your alley. Clearly there are many fans, considering how the first film made a killing, making US$193 million worldwide on a budget of US$13 million. Currently at 77% on Rotten Tomatoes, the critics have so far been quite complimentary.

The movie opens in 1928, with the wedding of Tom Branson (Allen Leech) and Lucy Smith (Tuppence Middleton), the series doing its signature blurring of the distinction between the upstairs and downstairs folk. There are two set pieces in play here: the first involve two film stars who come to film a silent film in the Crawley’s home, while the second part involves Granny’s (Maggie Smith) inheritance of a villa in the South of France.

It does feel more Disney-esque than dramatic, but Downton fans should have fun with this one.

It feels a tad ironic that May is known for Mother’s Day, and yet we have a movie called Men being released. The film is written and directed by Alex Garland, who has made some of my favourite movies of all time – Ex Machina and Annihilation to be exact. Also, the TV series Devs, which is also directed by him, is a brilliant, must-watch show.

In the aftermath of a personal tragedy, Harper (Jessie Buckley) retreats alone to the beautiful English countryside, hoping to have found a place to heal. But someone or something from the surrounding woods appears to be stalking her. Things then spiral into a full blown nightmare.

Top Gun was released in 1986, and now, 36 years later, we have a sequel. The film was slated to be released in 2020, but was pushed back due to the pandemic and now, we finally get to see it two years later. At this point I’ve probably seen the same trailer a gazillion times.

Tom Cruise resumes his role as Maverick, content to roam the skies as a captain rather than be grounded by a promotion in rank. While training a detachment of graduates for a special assignment, Maverick must confront the ghosts of his past and his deepest fears, culminating in a mission that demands the ultimate sacrifice from those who choose to fly it.

The nostalgia is heavy with this one, so if your parents are fans of the first movie, this could be something to bring them to and enjoy together.