Big Brothers in All Shapes and Sizes: 1984 & North Korea 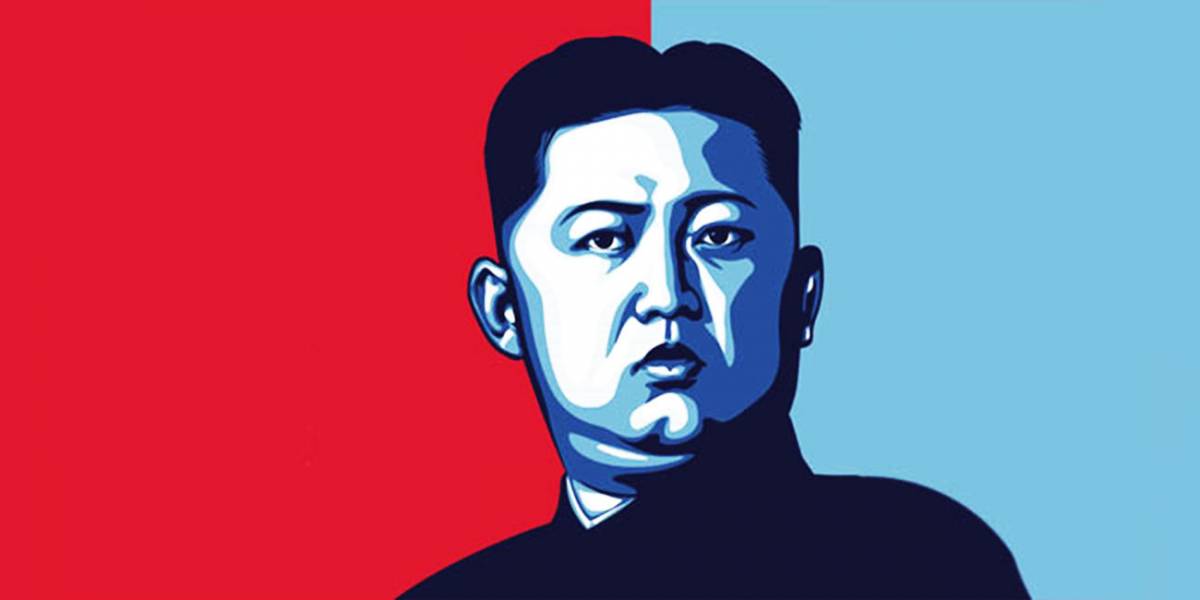 “At this moment the entire group of people broke into a deep, slow, rhythmic chant of ‘B-B! …. B-B! …. B-B!’—over and over again…Partly it was a sort of hymn to the wisdom and majesty of Big Brother, but still more it was an act of self-hypnosis, a deliberate drowning of consciousness by means of rhythmic noise.”

The Big Brother of Orwell’s imagination, arguably based on Stalin, was described as “the face of a man of about forty-five, with a heavy black moustache and ruggedly handsome features.” The real and modern Big Brother is bulbous, beady-eyed, baby-faced with a bad haircut, and goes by the name Kim Jong-un, the third supreme leader of North Korea. Of course, he is only one current form of Big Brother. To name a few, there was Stalin, as mentioned; there was the hysteric and rigid Hitler; and the stone-eyed and capricious Hussein, who, during his reign of terror, commissioned a copy of the Qur’an to be written using his own blood. The latter three dictators have been toppled, yet North Korea continues to remain a state of absolute authority as envisioned by Orwell in his chilling novel.

Published near the middle of the twentieth century, 1984 is set in a dystopian Great Britain, part of a superstate called Oceania, and follows protagonist Winston Smith. Smith is an employee at the Ministry of Truth, where he revises historical documents in order to keep them updated with the ever-changing agenda of the only political party, English Socialism (abbreviated as Ingsoc), whose head is that of Big Brother. A blog published on Salon cites seven points in which North Korea’s regime aligns with Orwell’s dystopia: A perpetual state of war created for societal constraint, a charismatic leader with a false cult of personality, a media blackout and constant paranoia, silencing dissidents for “thought crime,” ministries that align with the results of war, propaganda, torture, and starvation, an “Inner Party” with a high standard of living but is not as politically free as the economically oppressed proletariat class.

What North Korea lacks, however, is a universal surveillance system and an evolved language, like Newspeak, in which counter forms of thought are made impossible. Directing the evolution of language is an extremely difficult feat, and universal surveillance is extremely expensive, but to make up for that North Korea uses the eyes and ears of its own population, including children. Consider the situation explained in the novel: “It was almost normal for people over thirty to be frightened of their own children.

And with good reason, for hardly a week passed in which ‘The Times’ did not carry a paragraph describing how some eavesdropping little sneak—‘child hero’ was the phrase generally used—had overheard some compromising remark and denounced its parents to the Thought Police.” One immediately thinks of The Hitler Youth, where a thorough indoctrination of the Nazi regime’s children was implemented, and child spies were only one way the regime tightened its grip on power. If someone was found guilty of a crime, which included thinking the wrong thoughts, then they were convicted (without, of course, any real form of due process). The novel tells us “[the] arrests invariably happened at night. The sudden jerk out of sleep, the rough hand shaking your shoulder, the lights glaring in your eyes, the ring of hard faces round the bed. In the vast majority of cases there was no trial, no report of the arrest. People simply disappeared, always during the night. Your name was removed from the registers, every record of everything you had ever done was wiped out, your one-time existence was denied and then forgotten. You were abolished, annihilated: vaporized was the usual word.” The Soviet Union was particularly comprehensive with its method of vaporization, destroying film and even removing political figures from photos. Such is the type of work Smith engages in at the Ministry of Truth.

The reality, it seems, is even more horrifying than the imagination. In 2014, a report was released by the United Nations Human Rights Council condemning North Korea for crimes against humanity, including starvation, death camps, torture, and public executions, while tens of thousands are currently being held in political prison camps. The report was compiled after investigators interviewed North Korean escapees. The United Nations also released an emotionally devastating video of some of the survivors explaining the horrors they had experienced.

Authoritarian regimes like those of Hitler or Stalin or the family of Kims are usually considered “secular,” in that generally the major and minor religions are banned from practice and preaching. But, many people do not realize that these regimes are only quasi-political. They are mutations of government into the organization of a state religion. It is not secular in that there is a separation of state and church; rather, the church is the state and the state is the church. Consider the divine origin story of Kim Jong-il, the second supreme leader of North Korea, which claims he was born on Paektu Mountain in the presence of a double rainbow and birds singing in human voices. Consider the constant reinforcement and hysteria through parades and other theatrics; as reported, “An estimated $2.68 billion was spent on ceremonies and monuments in the aftermath of Kim Il Sung’s death.” Consider the wall decorated with a picture of the Father and Son (Kim Jong-il and Kim Jong-un) in every room of every building (except the lavatory), and how frames are placed on an incline to avoid a reflection in the glass.

Consider, too, the picture of Hitler adorned in the room of every Nazi party supporter and the belief in Welteislehre (cosmic-ice theory), which conceded that the main element of the cosmos and its processes was ice. The quack Hanns Hörbiger claimed he came to the truth through a vision, rather than scientific research and empirical evidence. Accepted by Hitler and Himmler, the “theory” was seen as the antithesis to the so-called “Jewish” theory of relativity conceived by Einstein through mathematical proofs. A Nazi character in the novel The Zone of Interest

, by Martin Amis, tells the preposterous implications of the ‘theory’: “The cosmic-ice theory… holds that the earth was created when a frozen comet the size of Jupiter collided with the sun. During the trillennia of winter that followed, the first Aryans were cautiously moulded and formed. Thus… only the inferior races are descended from the great apes. The Nordic peoples were cryogenically preserved from the dawn of terrestrial time—on the lost continent of Atlantis.”

One should also make note of the laws against “blasphemy,” or thought crime, touched on earlier. In Christianity, as Jesus explained, thought crime is punished with eternal torment in hell, showing that even in death there is no escape. Two examples are found in Matthew (5:22 and 5:28): “I tell you that anyone who is angry with his brother will be subject to judgment,” and “I tell you that anyone who looks at a woman lustfully has already committed adultery with her in his heart.” These are injunctions against human emotions and thoughts, not actions. In Orwell’s novel it is said, “Nothing was your own except the few cubic centimetres inside your skull.” In the novel, even this turns out to be untrue.

Winston eventually finds in his hands a mythologized “heavy black volume, amateurishly bound, with no name or title on the cover. The print also looked slightly irregular. The pages were worn at the edges, and fell apart easily, as though the book had passed through many hands.” This illegal book epitomizes counter thoughts, secretly exchanged within Orwell’s world. Ironically, 1984 became such a book. It was banned by the Soviet Union—the regime Orwell satirizes in the novel—and copies of the book were smuggled in a similar fashion.

Even still, North Korea has accomplished something quite different than previous tyrannies, real or imagined. As the journalist Christopher Hitchens, who once visited North Korea, explained: North Korea “has actually succeeded in producing a sort of new species. Starving and stunted dwarves [North Koreans are on average six inches shorter than South Koreans], living in the dark, kept in perpetual ignorance and fear, brainwashed into the hatred of others, regimented and coerced and inculcated with a death cult: This horror show is in our future, and is so ghastly that our own darling leaders dare not face it and can only peep through their fingers at what is coming.”

It should be noted that Kim Il-sung, the first supreme leader of North Korea, is dead, yet still remains in the position of Eternal President of the Republic, as dictated in the preamble of the government’s “constitution.” This makes North Korea the first “necrocracy,” as Hitchens called it. Kim Il-sung’s and Jong-il’s embalmed corpses are perpetually on display in a glass case at the Kumsusan Palace of the Sun, located in the capital Pyongyang (just like the bodies of Lenin and Stalin were embalmed and laid together until Stalin’s was removed in 1961).

Overall, Orwell clearly was not expressing any optimism when he said, “If you want a vision of the future, imagine a boot stamping on a human face—forever.” But Orwell’s last novel is an attempt, however cynical, at preventing that future. With stark prose, Orwell terrifies us into realizing that our most precious faculty is our ability to think critically, to question everything, and absolutely do away with absolute authorities. We should be wary of those people or institutions that disguise themselves as Brothers or Fathers, for they come in all shapes and sizes, and tell us, “If you’ll only suppress your critical faculties, I’ll offer you an eternity of bliss.”