Beyond A Steel Sky Is Shaping Up Nicely 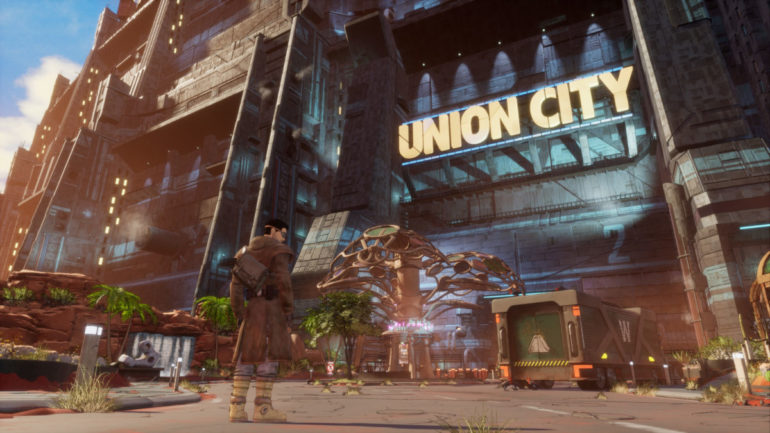 Way back in the heady year of 1994, Revolution Software created a game which would be as close to actually being in the world of Blade Runner as possible, Beneath a Steel Sky. It was Revolution’s most ambitious title to date, costing the hefty (at least for the time) sum of around £40,000. It was a collaboration between Revolution’s founder, Charles Cecil and Watchmen comic book artist, Dave Gibbons.

Beyond a Steel Sky isn’t your dad’s point and click game of old. The old school point and click style is all but gone here, and Revolution has gone with a Dreamfall Chapters-style over the shoulder camera. The game is now in full 3D, and I must admit that the idea of exploring Union City in 3D is very exciting.

Luckily, the gameplay remains familiar. Much like most point and click games, the aim of the game is to overcome problems and obstacles in order to progress. The demo had me trying to make my way into Union City illegally, and various issues needed to be solved before I was able to do so.

Talking to people is a key point of the game. Much like its predecessor, Beyond requires you to talk to NPCs, which gives you quests or clues to allow you to progress in the game. Often you’ll be required to talk to NPCs to gain vital information, the information you’ll not be able to progress without. These conversations also help to flesh out the game world and law, as well as convey Beyond a Steel Sky’s story.

Beyond also has a nifty hacking system. Using drag and drop, it’s possible to make machines behave differently. For instance, one machine dispensed drinks and there were three possible outcomes: Scan your hand (accepted) – receive drink, scan your hand (declined) – denied drink, shake machine – set off alarm. You can change the options around, so I switched it around to ‘shake machine – receive drink’, meaning I avoided having my hand scanned, which would’ve declined me the drink. It’ll be interesting to see how this comes into play later in the game.

Beyond a Steel Sky is due for release soon for iOS, PC PS4, Switch and Xbox One.