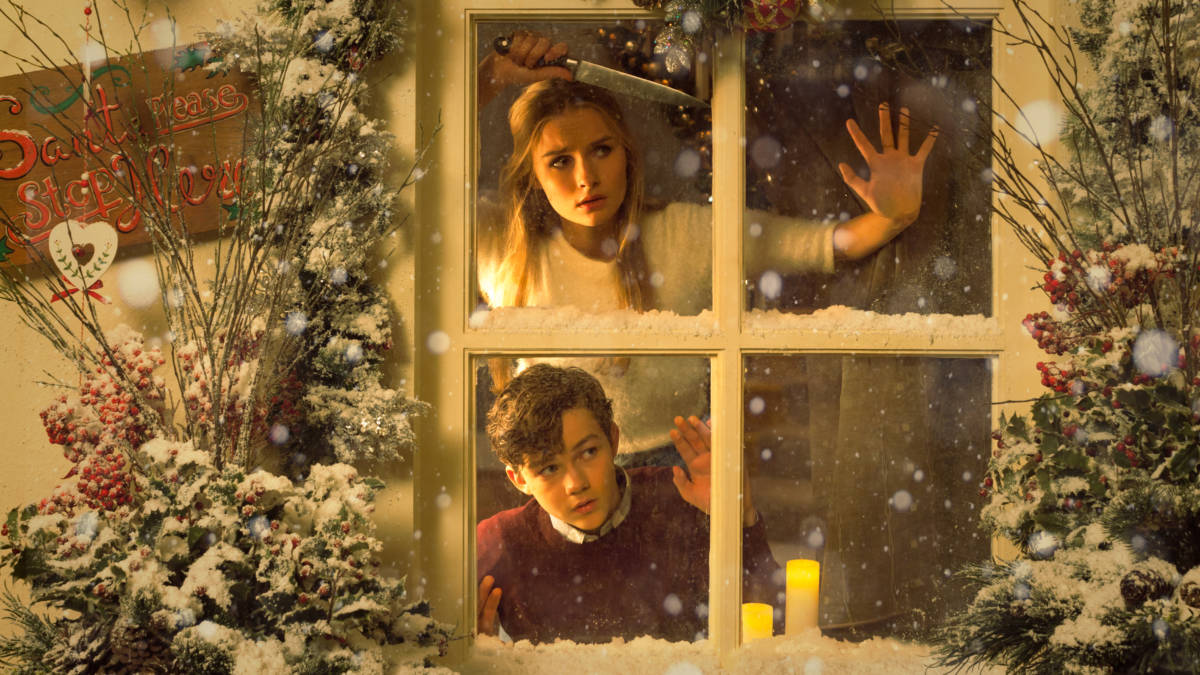 Better Watch Out opens with a shot of a cute snowman. The snowman gets clobbered by a couple of rowdy kids, losing its head. This is as good a way as any to set the scene for the movie we’re about to watch. Written and directed by Zack Kahn and Chris Peckover and directed by Peckover, Better Watch Out provides an unusual experience. Dark, disturbing, and yet not without camp value and humor (which serves to make the piece even more disturbing in its ironic juxtapositions), the film is a very visceral experience.

We begin with middle-school aged Luke (Levi Miller) and best buddy Garrett (Ed Oxenbould) in Luke’s bedroom, discussing the night ahead. Babysitter Ashley (Olivia DeJonge) is coming over so that Luke’s parents can go to a Christmas party. Luke and Garrett, both about twelve or thirteen years old, discuss Luke’s upcoming attempts at seducing Ashley. It’s pretty shocking stuff if you’ve never been a boy in his early teens or had any interaction with them whatsoever. It’s a strange and awkward time, of course, stuck in transition, knowing that more adult experiences are just around the corner and just out of reach. But none of this talk matters when Luke’s feeble attempts at seduction are interrupted by a home invader.

The Christmas setting might seem confusing at first, maybe like a kind of crass marketing gimmick, a hook of some sort. But when a big plot twist comes around thirty minutes into the film and we realize that this isn’t the story we thought we were getting at first, the Christmas season provides a neat juxtaposition to the violence that ensues. The supposed sweetness of the season combined with over-the-top brutality create several interesting layers of irony, heightening the very disturbing thesis that Peckover explores.

Better Watch Out is certainly a very visceral movie, in ways that you probably won’t see coming, but that’s part of the movie’s charm, if that’s even the right word. The three young actors do a wonderful job here, hyper-aware of the type of movie they’re in, adding realism when needed and a touch of camp whenever the script calls for it. The tone that Peckover was going for just wouldn’t have been possible if it wasn’t for these very talented young folks, who clearly have a bright future ahead of them.

The press release and more than one reviewer has pointed out that this is kind of like a horror version of Home Alone, and the comparison makes sense enough, even more than the home invasion at Christmas angle. Better Watch Out even references it in a pretty gruesomely overt way. The comparison is also apt in that it’s sort of a version of Home Alone if the violence had actual consequences. But don’t take this to mean that Better Watch Out is totally realistic. It does have quite a campy vibe at times, an undeniable B-movie aesthetic. The B-movie stuff sometimes dulls the emotional impact of the violence a bit and the movie gets this close to a more crass kind of exploitation film, but it never crosses that line.

Better Watch Out is a fun, surprisingly emotional horror movie experience. I’m not sure moviegoers who aren’t already fans of the genre will enjoy it, but horror fans will most definitely get a lot out of it.

Better Watch Out will be released theatrically and on demand on October 6th.