There's a lot to cover here. 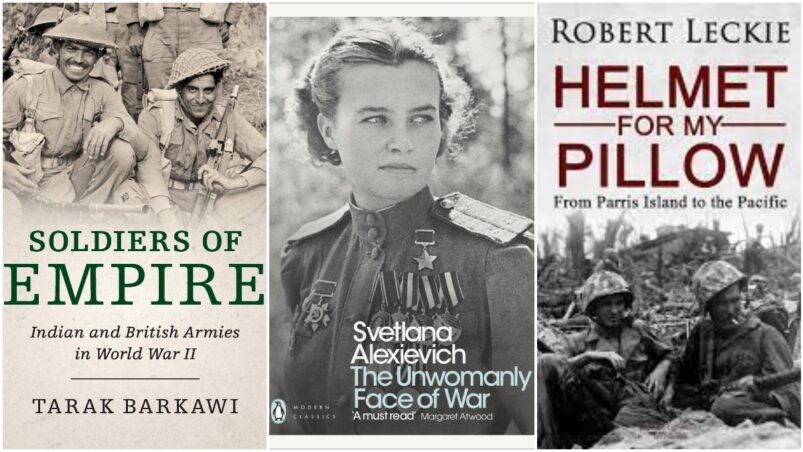 When it comes to the very best World War 2 books, there are so many options available that it’s hard to know where to start. No other historical period seems to capture our interest more, or have so many volumes written about it year on year, except for maybe the reign of the Tudors. But World War 2 is so relatively recent, and was so very destructive, that it’s no wonder we’re still trying to make sense of it.

The number of books available can be quite overwhelming, though, so we’ve narrowed it down to a list of what we think are ten of the best World War 2 books.

Max Hastings is a very reliable military historian, having written over twenty books mostly about historical conflicts. His research is always impeccable, and there’s very little sentimentality over the countries who came out of the wars as victors; he points out their flaws and mistakes as often as he does the losing sides.

He’s written extensively about WW2 and if you like this book then you should check out what else he has to offer. But The Battle For Germany, with a very narrow focus on the last eight months of the war in Europe, specifically along the German border, is a detailed and fascinating read.

2. The Destruction Of The European Jews – Raul Hilberg

Raul Hilberg’s The Destruction of The European Jews was first published in 1961, but it has gone through re-prints since then and is acknowledged by many as the key work on the plight of European Jews – even now, 60 years after it was written. It is certainly one of the best World War 2 books ever written.

Hilberg helped shape the discipline of Holocaust Studies with this book; beginning in 1933 with Hitler’s rise to power and covering the twelve years till the end of the war, Hilberg dissects how Germany and its territories went about this annihilation. He highlights just how many people – from administrators and civil servants all the way up to the top of the military were involved in the crime.

3. Enemy At The Gates: The Battle For Stalingrad – William Craig

You might have seen the film Enemy At The Gates, starring Jude Law and Rachel Weisz, but if you didn’t know there was a book behind the film, then now’s a good time to check it out. The siege of Stalingrad from 1942-1943 was one of the most horrific episodes of World War 2, and this book is an unflinching account of that time.

The best World War 2 books are the ones that don’t glorify the horrors of war, and Enemy At The Gates is exactly that book. It follows the lives of people on both sides, Russian and German, and is unflinching in detailing a dying city.

4. Forgotten: The Untold Story of D-Day’s Black Heroes, at Home and at War – Linda Hervieux

There has been a move in recent years, and quite rightly so, towards highlighting the roles that people of colour played in the history books – especially when it comes to the pervading myth that the First and Second World Wars were fought by exclusively white Europeans and Americans. Like the seminal work Band of Brothers, Forgotten focuses on a single group of soldiers – in this case the 320th Barrage Balloon Battalion, a unit of exclusively black African-Americans.

Linda Hervieux draws on military records and interviews with the surviving members of the unit to tell their story, and how the freedoms they discovered for themselves in Europe helped to kickstart the Civil Rights Movement back home. In a list of the best World War 2 books, volumes that break new ground like this must be included.

5. Helmet for My Pillow: From Parris Island to the Pacific – Robert Leckie

Helmet for My Pillow is an iconic work of World War 2 literature. First published in 1957, it is still one of the best first-person accounts of the war ever written, from the point of view of an ordinary soldier thrust into the midst of war. Leckie signed up for the Marines soon after Pearl Harbour in 1942, and got all the way to the war in the Pacific, where the fighting was some of the most intense.

Leckie writes very simply, but don’t be deceived by how easy his work is to read. In his words you find an unflinching, unsentimental and brutally honest account of a war won only by grasping desperately for every last inch of ground given to you.

It is impossible to have a list of the best World War 2 books and not include a volume on Hiroshima, the tragic city destroyed by the very first use of the atom bomb in the last gasps of the war in the Pacific. Of all the crimes committed in World War 2, and there were many, what happened in Hiroshima is up there as easily one of the worst. 100,000 civilians died on the day the bomb dropped in August 1945, and the world was never the same again.

John Hersey wrote his account of Hiroshima and what came after just a year after the bomb fell. He followed six men and women struggling to survive, and forty years after the book was published, Hersey revisited the same people and added another chapter about the horrific long-term effects of the bomb.

Winner of the Nobel Peace Prize, Elie Wiesel’s Night tells his own very personal story, that of a Jewish boy imprisoned in the Auschwitz and Buchenwald camps, struggling to survive alongside his ailing father. Night is a memoir, no doubt about that, but an artistic one for sure; his prose is lyrical and sometimes dreamlike, as he tries to render an image in the mind of the reader.

Any book that tells any story about the Holocaust is bound to be a difficult read, and Night is no exception. Aside from the horrors of life in the camps, Weisel is unflinching in describing his own guilt as he watches the deterioration of his father’s health, and wishes that he could be free of the burden. In a list of best World War 2 books, Night is the one that you have to read.

8. The Rape of Nanking: The Forgotten Holocaust of World War II – Iris Chang

The Second Sino-Japanese War started in 1937, two years before the official start of World War 2. But the fighting between China and Japan was soon engulfed by what was happening on the larger world stage, as China joined the Allies and Japan the Axis Powers. But the war had already begun for these two nations, and in December 1937, one of the greatest atrocities of the war was committed when Japanese forces invaded the Chinese capital of Nanking and massacred more than 300,000 civilians in six weeks.

What happened in Nanking is an emotionally charged horror story, and readers should know that before taking on this book. Chang uses survivor accounts to describe a city under siege, where people were butchered and raped for entertainment. She tells stories from Chinese and Japanese witnesses, as well as Westerners who happened to be in the city, so the accounts are fairly balanced. There is nothing sensational about this book – and that is perhaps one of the most disturbing things about it.

Just as with Linda Hervieux’s account of African-American servicemen and their forgotten contribution to the war effort, Tarak Barkawi sets out to do the same for the thousands and thousands of men from across the Empire who served in the British Army. You only need to look at the unfounded criticism surrounding the inclusion of Sikh soldiers in the film 1917 to understand why books like Barkawi’s are so necessary to the study of twentieth century history.

Barkawi focuses on the British Indian Army and their particular contribution in the Burma campaign, but he goes beyond the usual narrative account to discuss how soldiers are made and why they fight, through the lens of post-colonialism. This is a very interesting book that goes places you might not expect.

10. The Unwomanly Face of War: An Oral History of Women in World War II – Svetlana Alexievich

Another group of people often shunned in the books about World War 2 are women, especially when it comes to the military history side of things. But women did participate directly in the war, filling a number of roles from doctors and nurses to machine-gunners and snipers. Alexievich’s Nobel Prize winning book tells the story of women in the Soviet Union and the crucial parts they played in the war.

Alexievich made an epic journey through the country to collect her stories, visiting over 100 towns and villages to meet the women there. They told her about war on the home front and the front line, how their efforts were largely ignored. This is one of the best World War 2 books ever written, and it is entirely due to Alexievich’s determination that the sacrifices these women made will not be forgotten.