The USA is young but the history is long. 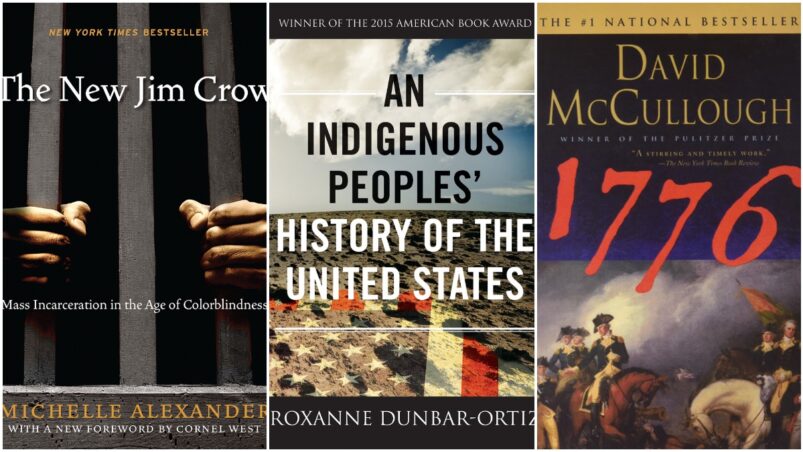 When it comes to the history of America – and for the purposes of this list, I do indeed mean the history of the USA – there actually isn’t that much history to cover. In comparison to the rest of the world, the country is a young one, and the best American history books are concentrated in a remarkably short period of time for a nation that has become so influential. But short or not, the USA has had a tumultuous history, and one that has – for better or for worse, depending on your opinion – been formative for the rest of the modern world. We’ve rounded up some of the best American history books to help you get a handle on the country.

Perhaps the definitive work of non-fiction about the American War of Independence, and the crucial Declaration of Independence, 1776 is the story of the USA’s foundation. McCullough won the Pulitzer Prize for this work, and it remains a remarkably popular piece of work even fifteen years after publication.

McCullough has a real gift for humanising his subjects – kings, generals and soldiers alike are all given his treatment – and putting a face to the often-mythologised stars of this particular story. King George III and George Washington have never felt more real than they do between his pages.

If you’re looking for authors who know their stuff about the foundation of the USA and you don’t choose David McCullough, then your other option is Ron Chernow. Chernow’s speciality is biography writing, and his most famous work by far is his portrait of Alexander Hamilton, forever known now as the basis for Hamilton after Lin Manual Miranda happened to decide to read the book on his holiday, and the world of musical theatre turned upside down.

These enormous volumes of biography could be counted as some of the best American history books if only for how deftly Chernow covers not only the life of his subject but weaves it into the much larger narrative of the story of the USA. Hamilton’s story – from immigrant bastard living in the Caribbean to the trusted man running the US treasury, via a spell as a successful and influential soldier in the Revolutionary War – is a particularly vivid and eventful tale.

If you’ve only ever seen HBO’s Band Of Brothers – a TV show that definitely is worth the hype, if you’re into historical drama – then now is the time to check out Stephen E. Ambrose’s book. It is a book of interviews, some of which intercut the TV show, but longer and in much more vivid detail.

There are so many books about World War Two that it is hard to choose one for a list of the best American history books, but Band Of Brothers tells the story of ordinary men and their extraordinary bravery – and there is little better than that. You will come to really care about the men of Easy Company.

This book is the sixth volume in the Oxford History Of The United States, a massive series that is still being written almost forty years after it was begun in 1982. McPherson’s contribution to that series is often described as the best single volume of writing ever published on the American Civil War, as well as the entire Civil War era.

Written in 1989, this book is as fresh now as it was then, starting with the aftermath of the Mexican War and weaving together a story of politics, economics and human beings that winds through the 1850s, the Civil War and beyond.

In the same way that Band of Brothers serves to tell the stories of ordinary soldiers in the Second World War, so does Studs Terkel’s The Good War – but his focus is more wide-ranging as he records oral history from a huge variety of American people, not just soldiers.

Terkel’s name often comes up when discussing the best American history books, and that is because his work has been extremely influential. From men who were present at Pearl Harbour to people living on the Home Front, from soldiers on the front line to prisoners of war, Terkel’s work in The Good War covers almost everyone you could think of.

6. Hillbilly Elegy: A Memoir Of A Family And Culture In Crisis – J.D Vance

Within the USA, there exists a little discussed underclass of people called ‘hillbillies’, ‘rednecks’ or even ‘white trash’ who are some of the people who helped to ensure the election of Donald Trump to the White House in 2016. Instead of dismissing them as uneducated and ignorant, it would be much better to understand why they make the political decisions that they do – and a personal memoir about life growing up in the Kentucky Hills could help to answer the question.

Vance tells a no-holds barred story about his family; fiercely loving and loyal to one another, there is no easy escape from the cycles of trauma and alcoholism that haunt the family, or the legacies of violence and abuse. The way that this group of people is looked down on and dismissed by those ‘more fortunate’ is really eye-opening, and a thing that certainly isn’t discussed enough in the political arena of the United States.

30,712 Reviews
Hillbilly Elegy: A Memoir of a Family and Culture in Crisis
Buy on Amazon

If you’ve only seen the film version of Hidden Figures, then the book cannot be recommended enough. Dorothy Vaughan, Mary Jackson, Katherine Johnson, Christine Darden, and Gloria Champine are the African-American women who worked as ‘human computers’, segregated from their white counterparts but just as crucial to the success of the earliest NASA missions as they helped to write the equations and calculate the flight paths that would allow rockets to launch into space.

Hidden Figures again draws on the oral history of the ‘computers’, telling a story much bigger than just that of NASA missions; the Civil Rights movement, the rights of women and the Cold War are all examined too.

8. An Indigenous Peoples’ History Of The United States – Roxanne Dunbar-Ortiz

Dunbar-Ortiz’s work claimed to be the first history of the USA told from the Native American perspective, and it is indeed a work of great importance, reframing the history of the United States to tell the story from the point of view of the people who were there first. Any list of best American history books that don’t include this vital perspective can’t really claim to be telling the whole story.

Dunbar-Ortiz is does not hold back in painting a vivid picture of people whose way of life was to come under constant attack. The genocidal program carried out by the settlers in the States, long since swept under the carpet, is laid out for us to see once more. Policies designed to seize land from indigenous populations are examined in detail. This book takes no prisoners and nor should it; this is a story that needs to be told again and again.

9. The New Jim Crow: Mass Incarceration In The Age Of Colorblindness – Michelle Alexander

Michelle Alexander is a hugely influential civil rights lawyer and advocate, and her 2010 book The New Jim Crow has proven to be just as influential; it has even been cited in in judicial rulings. It is probably one of the most important books published about the US in the last fifteen years, and more than earns a place on the list of best American history books.

In essence, Alexander argues that the war on drugs in the 1980s was a reframing of the Jim Crow laws, as black and brown people were – and still are – incarcerated far more frequently than their white peers for possession of even a small amount of drugs. They are given harsher sentences. They are barred from resuming ‘normal life’ once they are released, and the vicious cycle continues. This book is a vital read, perhaps the most vital on this entire list.

John Hope Franklin was the foremost African-American historian of his time, and Runaway Slaves was one of his most important works of non-fiction. Even now, generations after the end of slavery in the USA, there is a perpetual myth that slaves were generally compliant and obedient to their masters. Franklin and Schweninger challenge that myth by collecting together evidence to suggest that slaves absconded regularly – and that many who did were working alone, brave individuals making a stand against their oppression.

Even now in the twenty-first century, these myths of slaves contented with their lot in life are actively harmful, and Franklin and Schweninger’s work goes a long way towards shining a light on the truth.

58 Reviews
Runaway Slaves: Rebels on the Plantation
$24.95
Buy on Amazon