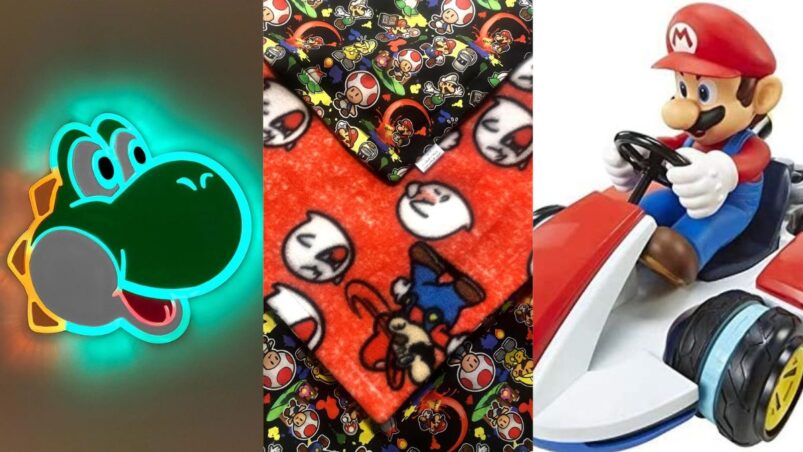 Almost everyone in the world is familiar with the famous mustached plumber mascot of Nintendo. Mario first appeared in a Donkey Kong game back in 1981 and has since been a part of over 200 games of his own.

Whether you’re looking for a gift for a young Mario fan, an adult whose nostalgic memories of Mario stay close to their heart, or yourself, there’s a variety of fantastic Mario merchandise available. We’ve compiled a list of the best Super Mario gifts around so you can easily find that perfect something, so “Let’s-a go”.

Arguably, some of the coolest things Lego has released in the past few years are the company’s interactive Super Mario lego sets. If you don’t have any of these sets yet, you’ll want to get a starter set, with our recommendation being the one that includes Mario himself.

With a ton of Mario-themed games on the market, a few of them will inevitably make their way to the list. Super Mario 3D World + Bowser’s Fury was released in February 2021 as part of the 35th-anniversary celebration of Super Mario Bros.

The game features co-op gameplay, imaginative levels, and awesome power-ups, as well as an entire feline world to explore in Bowser’s Fury. You can opt to team up and work together or compete in a friendly match to see who can get the highest score.

The Mario Kart game series is an iconic part of the Super Mario franchise, with many of us falling prey to the devastating twists and turns of Rainbow Road. You can bring that high-speed racing action out of your TV with these awesome Mario Kart 8 RC Racers.

The RC Racers come as either Mario or Luigi and have a 100-foot range. They can also do tricks, like 360-degree spins and wheelies.

If you’re looking for a gift that is Mario-inspired and also carries a ton of nostalgia with it, this Super Mario cartridge shadow box is the way to go.

The 8” x 10” frame contains a replica cartridge of Super Mario Bros. 3. Surrounding the cartridge are replications of specific scenes from the game, including the Fortress.

Most Mario fans love puzzles, as many of the levels in the iconic games are all intricate platformer puzzles waiting to be solved. If you want to take a break from your screen, these physical Super Mario-themed puzzles are a great way to pass time.

These durable 1,000-piece Ravensburger puzzles will give you hours of fun as you try to piece together Mario and his friends. If you really want a challenge, go for the second option, which features a sea of Marios.

We already brought up the RC Racers, so it was only a matter of time until we mentioned the famed game. Mario Kart 8 Deluxe was released in 2017 as an expanded and enhanced version of the original Mario Kart 8 from 2014.

Prepare to lose friendships as you maneuver your way through epic tracks, both new and old. Don’t get hit by the spiny blue shell as you race your way to the finish line.

There are many Super Mario toys available, and these figures make a great gift, whether you’re wanting to set up a display or play with them.

This 3-pack of figures comes with Mario, Luigi, and the beautiful Princess Peach. You can even get the Mushroom Kingdom Castle set, which comes with a Bowser figure, so you can reenact some awesome battle scenes.

While Mario is the star of the franchise, there are many iconic supporting characters that fans know and love. These plushies make great gifts for anyone who adores the side characters in Mushroom Kingdom.

This cuddly Boo plush allows you to finally give that shy ghost the hug it needs. You could also choose this adorable Dry Bones plush, which definitely won’t crumble to pieces if you jump on him.

Everyone is familiar with the dangerous Piranha Plants scattered throughout the levels of various Super Mario games. While you may not be able to grow one of these in real life, you can place your existing plants in some cute Mario-themed planters instead.

This set of three planters is designed to look like elements from the Super Mario games, including the green tube, the yellow mystery box, and the brick box. Each is made with concrete and works well for tiny succulents.

The Super Mario franchise isn’t all about racing and running through levels. There are also a ton of sports games to choose from, including Mario Strikers: Battle League which was released in June 2022.

This sports video game features a 5-on-5 soccer-like match with no rules. Players must do whatever it takes to win, like tackling enemies, using items, and performing Hyper Strikes.

Much of your time as a Mario fan is spent playing through the many games in the franchise. This Mario-inspired Nintendo Switch Controller allows you to play your favorite Super Mario games in style.

The controller has a Mario Pop design that features Mario alongside several iconic power-ups, including the Star and Flame Flower. Best of all, the controller is wireless, connecting to the Switch via Bluetooth.

If there’s anything that’s ruined almost as many friendships as Mario Kart has, it’s Super Smash Bros. Ultimate. The fighting game was released in 2018 and still remains super popular today.

This incredibly fun game not only features iconic characters from Super Mario, but it features a ton of other Nintendo characters, too, including Link, Kirby, Cloud, and more. Choose your character and dive into battle to see who will come out as a champion.

You’ll want something to keep you cozy while you play through your Super Mario collection, and this soft Mario-themed blanket will definitely do the trick.

This fleece blanket is handmade and features a reversible design, with several Super Mario characters featured on one side and Mario and Boo on the other. The blanket is 54.5” x 61” and can be machine-washed.

The franchise has platformers, racing games, fighting games, and sports games, but it doesn’t stop there. It’s also well-known for its fun and competitive party video games, with the most recent being Mario Party Superstars.

Play against your friends as you work your way through any of the five classic boards, including Peach’s Birthday Cake and Yoshi’s Tropical Island. You can also play a variety of minigames from throughout the series.

Last up on the list are these awesome Super Mario-inspired lights from the Etsy shop NerdyWood8008. These lights are made with a combination of acrylic, wood, vinyl, and LED lights to bring a truly amazing illuminated piece of Mario art to your room.

You can choose to go with a cute green Yoshi design or go for an adorable red Shy Guy. If you want to really rep the enemy’s side, you could also choose this epic red Bowser design.