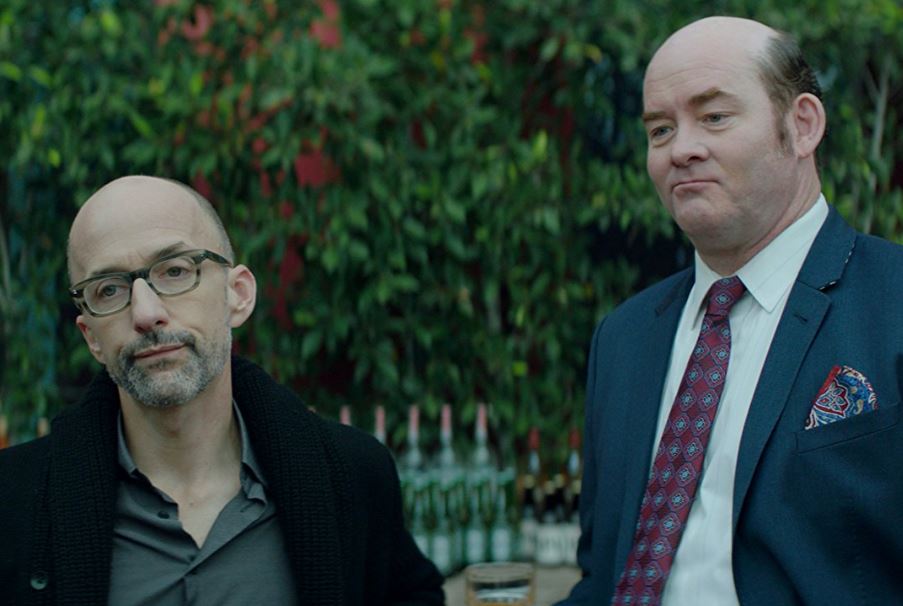 It’s not every day that a long-lost screenplay is discovered and soon gets prepped to become a feature film but this is what happened with the Jules Feiffer’s screenplay for Bernard and Huey. Lost for nearly 30 years, the script was soon discovered and a Kickstarter campaign was underway. Cut to over two years later and the film is finally screening at festivals this fall.

With everything Mirvish went through to acquire the screenplay and film rights, the effort to discover the Feiffer screenplay could certainly be a film in its own right. Maybe a documentary bonus feature on the Blu-ray/DVD release?

Ladies man Bernard (Rash) and his best friend, Huey (Koechner), made their first appearance in a comic strip that goes back to 1957 and have made multiple appearances in other media. Here’s where Bernard and Huey succeeds as a film adaptation where The Dark Tower didn’t: adapt a film from a source material and not leave the viewers confused by what’s happening on screen.

The filmmakers have made the practical decision to update the time periods in which the film is set given the costs of recreating two time periods on screen. The cinematography from Todd Antonio Somodevilla helps to separate the differing periods. The 1980s are re-created by shooting on Super16 Kodak film with Panavision Arriflex cameras. The same cameras are used for the contemporary scenes are aided by frame-within-frame techniques, slow push-ins and dollying, along with optical zooms while using a Arri Alexa camera to film.

As we cut to the present day, Bernard is better off financially but he’s still a ladies man and that’s his ultimate downfall. Huey’s life hasn’t turned out all that great. His daughter’s not out of the picture but they aren’t talking, he’s divorced from his wife, Aggie (Young), and doesn’t talk with his brother, Marty (Kind), either. The two of them certainly have issues in their lives, most importantly relationships.

Huey’s daughter, Zelda (Whitman), is an aspiring cartoonist and the two don’t have the best relationship with each other. Making matters worse, it’s Bernard who decides to go after his friend’s daughter because, alas, he’s a womanizer and he’s reluctant to accept that he needs to look for someone his own age. If it’s any consolation, Zelda is very much Huey’s daughter in the way she treats Bernard.

Bernard and Huey is a film about relationships and fatherhood but it’s also one that will likely hit close to home for the lifelong single folks. Because of the relationships, it probably won’t have the same appeal to younger viewers in a post-feminist world like it will to older viewers.

Bernard and Huey is screening at a number of festivals this fall, including the Denver Film Festival and St. Louis International Film Festival.