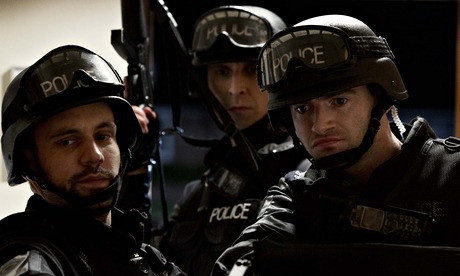 I’ve lost a certain amount of faith in Jesse Armstrong and Sam Bain lately. After the consistent high standard of Peep Show and the sheer brilliance of Four Lions it seemed like they could do no wrong.

That was called into question for my part when Fresh Meat came along; while the first season had some genuinely funny and surprisingly dramatic moments, it has always suffered from an unhealthy ratio of irritating characters to interesting ones and the steady decline in quality through the seasons means that as a sum of its parts the show is over hyped and under… good.

Now the duo offer us Babylon: a 90 minute TV movie directed by Danny Boyle that aired last Sunday and is set to grow into a full series in the near future. At a glance, it appears as if Bain and Armstrong are harking back to their time working on The Thick of It – turning the eye of biting, profane satire away from Downing Street and towards Scotland Yard. Babylon is centred around the Metropolitan police and the way in which they relate to the media. The key difference is that The Thick of It was a pitch black comedy that peered into the murk of top tier politics and offered very little evidence of any real decency or redemption. Babylon is a human drama first and a satirical comedy second so we’re invited to look at these characters and empathise with them. 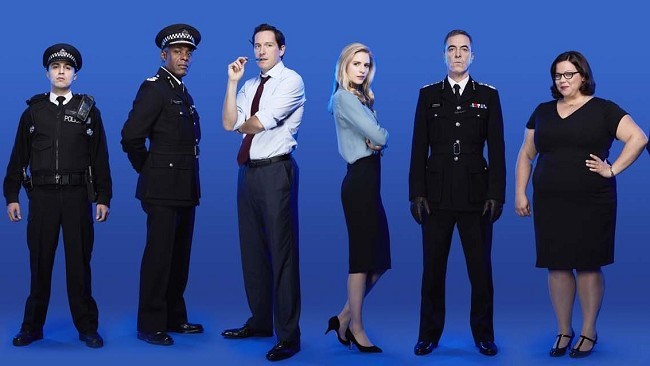 The show succeeds in this endeavor for the most part as James Nesbitt offers a restrained, considered performance as commissioner Richard Miller who is trying with admirable integrity to address both the image of a modern police force and the capability of an effective one. Jonny Sweet is hilarious as Miller’s incompetent, neurotic assistant and Ella Smith is particularly decent as a press officer that somehow perfectly toes the line between inept and calculated. The character at the forefront though is Liz Garvey (played by Brit Marling from Another Earth), a newly assigned head of PR who has jumped straight from a job with Instagram to a job ‘where lives are at stake’. Her idealism and modern designs seem well suited to the task of cleaning up the police’s image at first but when London is suddenly faced by a potential catastrophe in the wake of a series of shootings, things get a lot more complicated for the newbie.

While the higher ranking officers wrestle with the notion of ‘transparency’ at the top of the pyramid, we are offered an insight into some of the actual groundwork. Firstly with a patrol of officers that have been made the focal point of a fly-on-the-wall TV show as they dredge their way through unfulfilling work monitoring peaceful protestors and stopping people from hanging banners on lamp-posts. The second way is with a team of rapid response officers, one of whom was recently entangled in a shooting and is attempting to retain a macho, unperturbed attitude in the company of his meat headed colleagues. These sections were the weakest, for my money; Kidulthood star Adam Deacon’s turn as a self-righteous wannabe Dirty Harry trying to cheat his way into a firearm license falls utterly flat despite the odd sharp line (“I will verbally dominate you!”) and the second strand feels meandering and boneless, with the only poignant moment being when the officers mistakenly pull over the wrong car and end up approaching it armed to the teeth only to find a stoned, terrified mother and her young child inside.

The real strength of the show comes from the conflict drawn between Garvey, the brass and her conniving assistant, who lurks about the head office wearing a shit-eating smile and working under the radar to discredit his new boss. The thing is though, he’s motivated by a belief that idealism and transparency have no place within a potent, ironclad police force and while he’s clearly not a sympathetic character, he isn’t entirely wrong. As much as Babylon put me in mind of The Thick of It, it also put me in mind of The Wire, since it works to portray the palpable frustration of trying to do your job or even just do the right thing in the wake of crippling bureaucracy, media meddling and public disapproval. In the opening scene of the show, a half-naked man finds his house being raided andfacing the muzzles of several sub-machine guns, but his primary concern seems to be that one of the officers is swearing quite a lot. When he is eventually tasered, his wife arrives and begins filming all the officers on her phone and firing questions at them, suggesting that they’ve killed him and threatening to put it all up on YouTube. This brilliant scene perhaps frames the message of Babylon: the image of the police is interfering with their job and it’s becoming a case of adapt to survive.

It was an enjoyable, if somewhat flawed offering that brimmed with poignancy and darkness. Hopefully the upcoming show will be better at counterbalancing the tension between the people at the top and the people on the ground