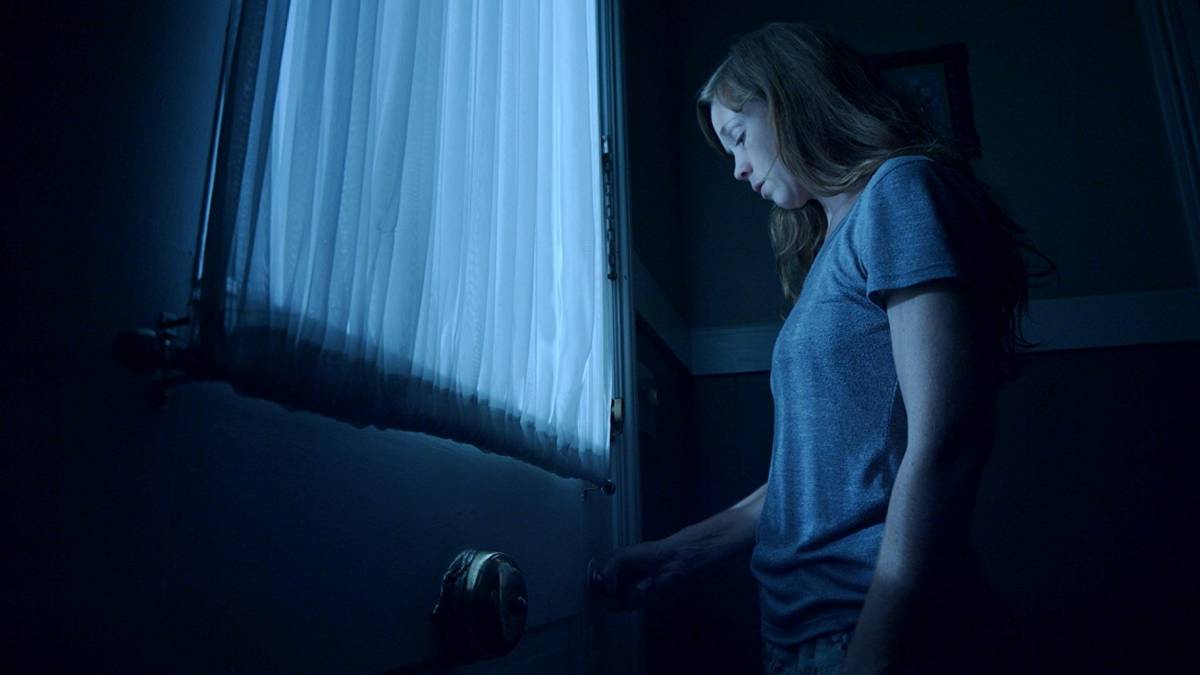 Written and directed by Michael Williams, The Atoning is a fun mystery of a haunted house horror movie that keeps you guessing and on edge throughout. You get me a horror film with a bit of atmosphere and at least a little bit of subtlety, and I’m there. The Atoning was all that and more, so I was definitely into it.

We get right into things even before the opening credits with a thunderstorm (of course). Vera (Virginia Newcomb) is in her suburban home with her son Sam (Cannon Bosarge) as he sleeps. There’s danger here, but what it is isn’t specified. Not yet. We feel Vera’s terror, and that’s enough for the moment. Plot details reveal themselves slowly over the course of the movie. Atmosphere and mystery are more important here.

You’re not even quite sure you’re dealing with a haunted house until the first act is winding down. That’s how much mystery matters in this movie. The one thing that is clear from the beginning, though, is that we’re dealing with a very brutal extended meditation on the metaphysics of paternal abuse and divorce. It’s the one theme that unites the film as it unravels its many slow revelations. An entire movie could be made from the interpersonal tension between Vera and her husband Ray (Michael LaCour). So much emphasis is placed on psychology that the ghost story part of the film becomes less scary, but the tension of the piece keeps you riveted.

There’s a big reveal in the middle of the film. A bold choice, yes, but it really says a lot about the screenplay that the narrative is able to offer a new level of tension after the reveal, further layers of surprises. After this first reveal, the mystery deepens and becomes even more surprising. You begin to wonder if the rest of the movie is going to prove anti-climactic, but luckily, that’s not the case at all.

Williams takes a lot of care in the construction of his film. The cinematography and shot choices are all very meticulously planned and eye-pleasing. There’s some beautiful stuff here that really stands on its own. There’s a beautiful shot at the beginning of the film where Sam is playing with a samurai sword, bathed in the light coming through the window of a door. That thick, rich light will reveal its important later. Nothing is in the movie by chance. As you might expect, this being a haunted house movie and all, there are a lot of POV shots, but even these are uniquely framed, slightly askew, leaving us wondering what’s really going on.

The performances are good throughout. Sometimes they’re very good. Newcomb is a standout actor. She wears Vera’s brokenheartedness in every expression, appearing almost existentially frightened throughout the film.

The Atoning almost becomes arthouse horror, but there’s enough B-movie sensibilities about the piece for it to appeal to horror fans of all sorts. The movie is ultimately about the secrets we keep buried, those things we don’t want to face, but we must face, if we want to make spiritual progress. Clearly a passion project, The Atoning is a very good indie horror flick that’s definitely worth checking out.

The Atoning will arrive in theaters and on demand on September 5th.