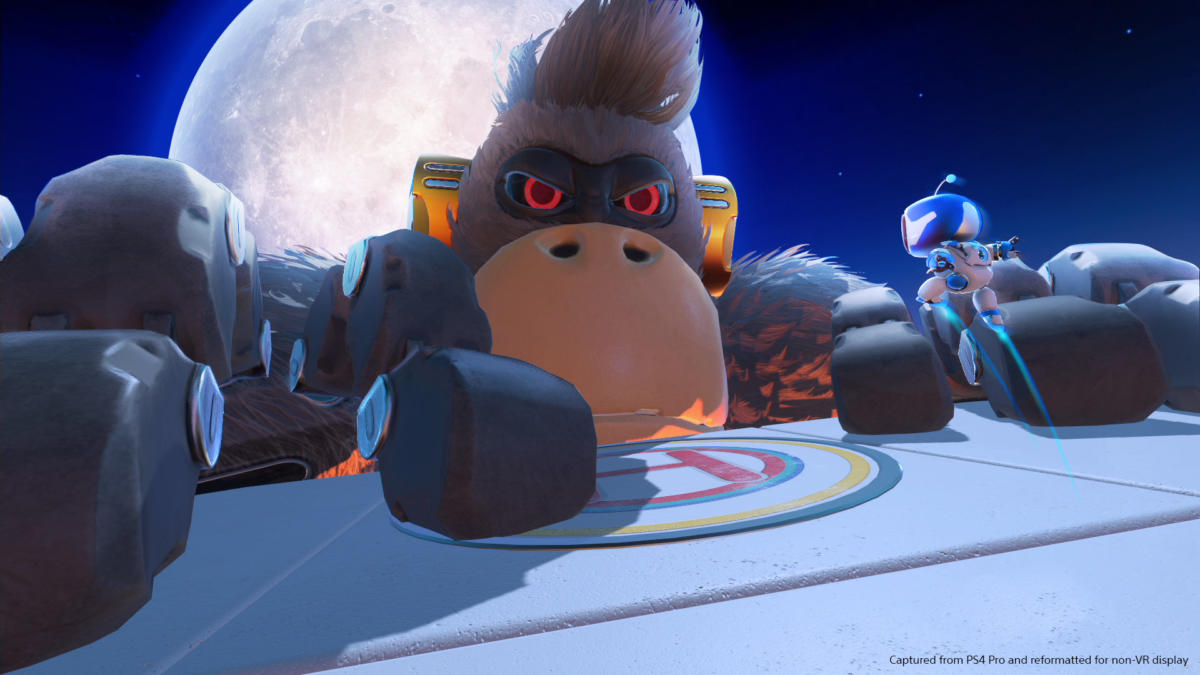 If you had told me four years ago that a virtual reality platforming game featuring the PlayStation 4 mascot that everybody quickly forgot about would be one of my favourites games of 2018, I probably would have laughed. However, confounding my own low expectations based on its characters alone, Astro Bot Rescue Mission is some of the most fun I’ve had not only with the PSVR headset this year, but ever since I picked one up.

Anyone who’s ever played any collectathon platformers will feel immediately comfortable with Astro Bot Rescue Mission. Within seconds of starting the game, an alien comes along and wrecks the Astro Ship, sending its crew scattered across the universe. It’s up to you in a dual role (the Johnny 5-alike behind the controller and the captain of the ship, Astro) to find the little robot critters that you might remember from The Playroom, or even Robot Rescue from the PlayStation VR demos. 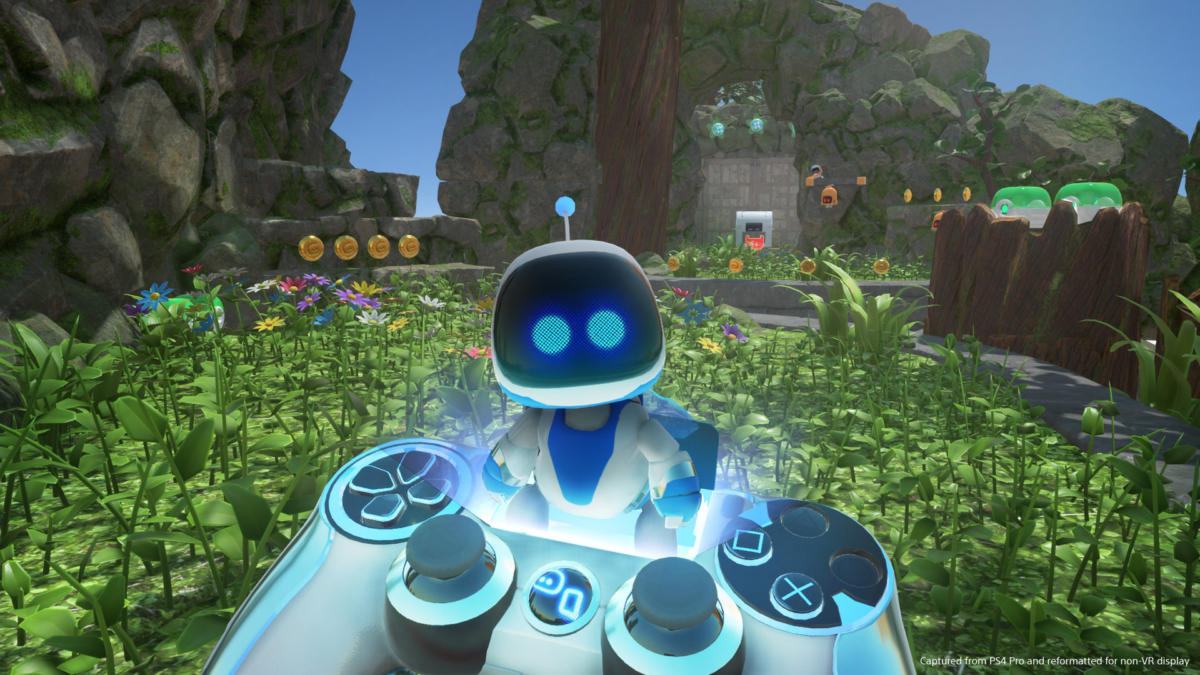 The success of the latter inspired Sony and Japan Studio to create Astro Bot Rescue Mission, which is in a similar vein to Polyarc’s Moss. You play as the “overseer” and also the tiny protagonist fighting against all odds, wrapped up in some tight platforming and a surprisingly deep well of content. It’s also one of the most adorable games you will ever play.

Astro Bot Rescue Mission consists of five different worlds with five stages each, the final stage of each world being a boss fight. Each stage takes on a different theme with them typically being absolutely gorgeous to look at. Playing on a PS4 Pro, you see plenty of fidelity with everything having a lovely sheen and just generally looking like you’re living inside a Pixar movie. There’s nothing like staring out at the sea or simply watching the sky to see what goes by — Astro Bot Rescue Mission will regularly make you just stop and watch on in wonder. 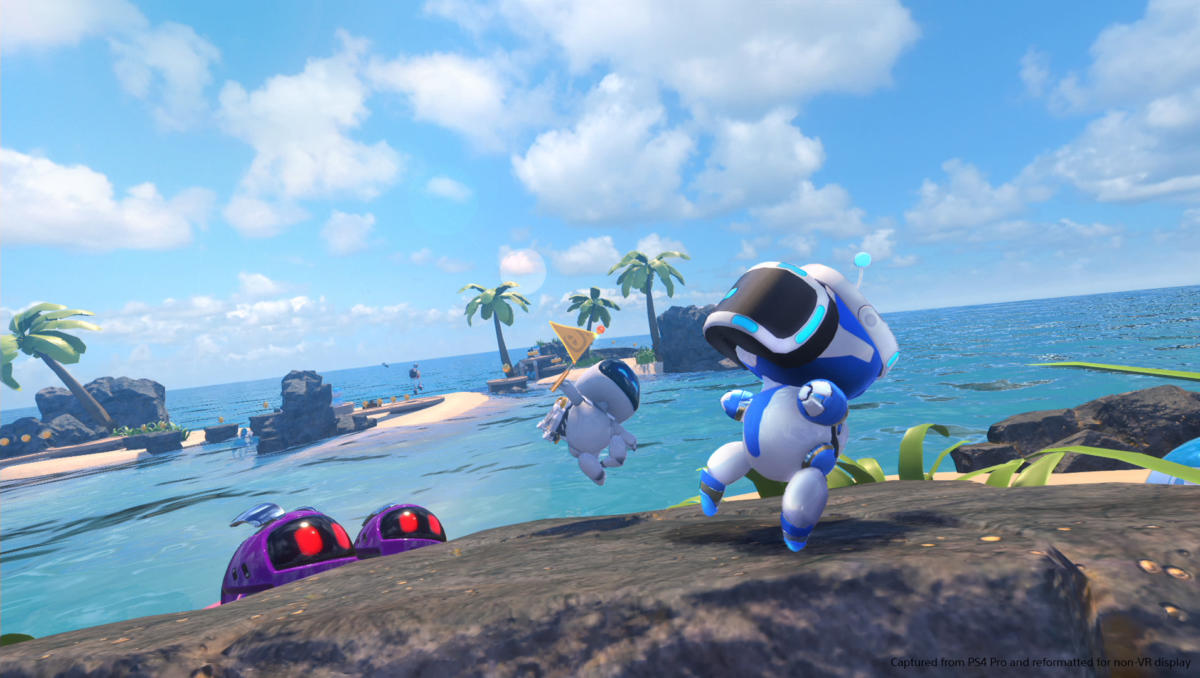 That’s actually even better than it sounds. While the main aim is to reach the end of a level, you’re going to need to search for robots along the way. At first, you won’t think much of these bundles of energy and may even just swerve trying to figure out the conundrums to reach them altogether. Over time, though, you’ll begin to feel a moral obligation to collect them all — I have purposely killed myself many times in a level when the guilt of leaving a little buddy behind is too much to bear. Their little cries of “help me” are endearing, as well as being likely to make you feel like you just shot Bambi’s mother if you ignore them.

They also help you pinpoint their location, which tends to be the strangest places. Some can be hidden in plain sight, gently fanning themselves because of the heat or even just sitting on a deckchair by the beach, but others require some real out-of-the-box-thinking to track down. You’ll have to crane your neck around corners to find some, look down to the depths to find others; your PSVR headset is as useful a tool as Astro’s fists. It’s wonderfully realised and simplified, so much so that anyone can pick up the headset and realise pretty quickly what they need to do. 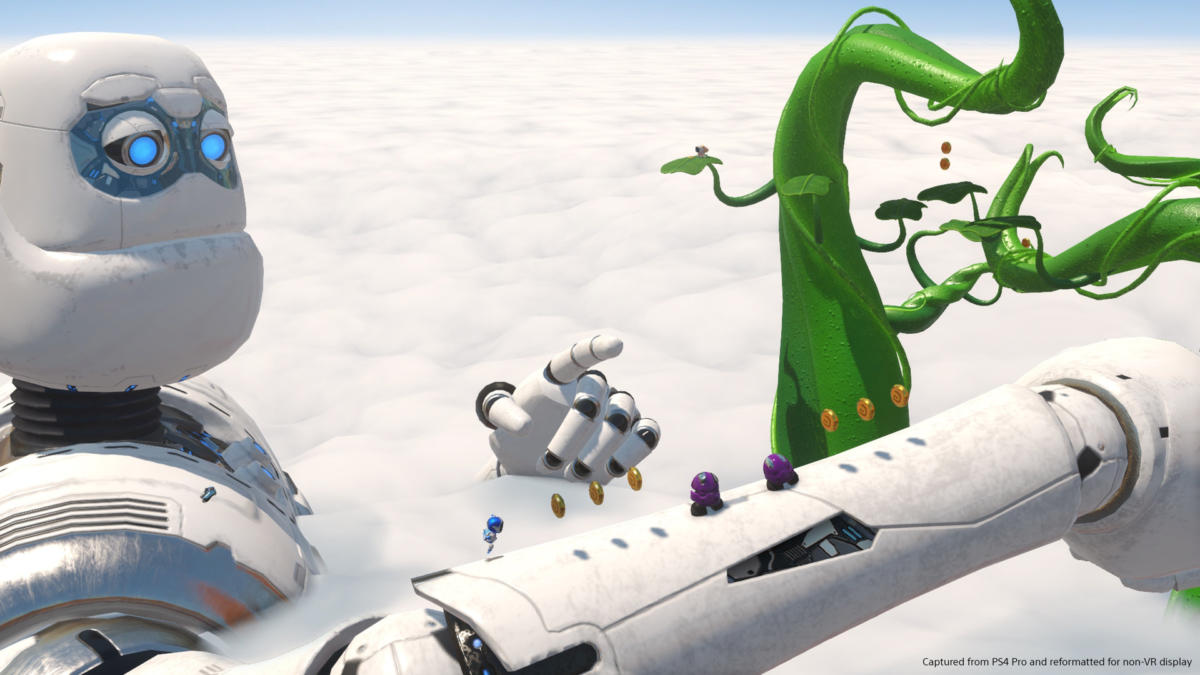 For the majority of your time with Astro Bot Rescue Mission, you’ll only ever need X and square, the former to make Astro jump and the latter for attacks. The combat is straightforward enough: punch the basic enemies, jump and then hover over spiked and electrified enemies to laser them with Astro’s boots. Despite that, Astro Bot Rescue Mission is a surprisingly tricky game with a few sequences that had me muttering (and also occasionally exclaiming) obscenities. You have to constantly be multi-tasking, aware of where Astro is and keeping him safe as well as solving puzzles. The checkpointing is generous, to say the least, so any of the small hills that Astro Bot Rescue Mission irregularly puts in front of you can be climbed.

The same goes for the puzzles, which are marvellously inventive and make use of the headset alongside the DualShock 4, happily the only controller you need for the game. You are barely even required to move the DualShock far beyond your lap at all, so you can relax while playing and also eliminate any tracking issues that may have otherwise cropped up. Astro Bot Rescue Mission is a great mix of approachable gameplay and innovative mechanics that should sell anyone on virtual reality, as well as not featuring that many scenarios that may make novices feel nauseated. 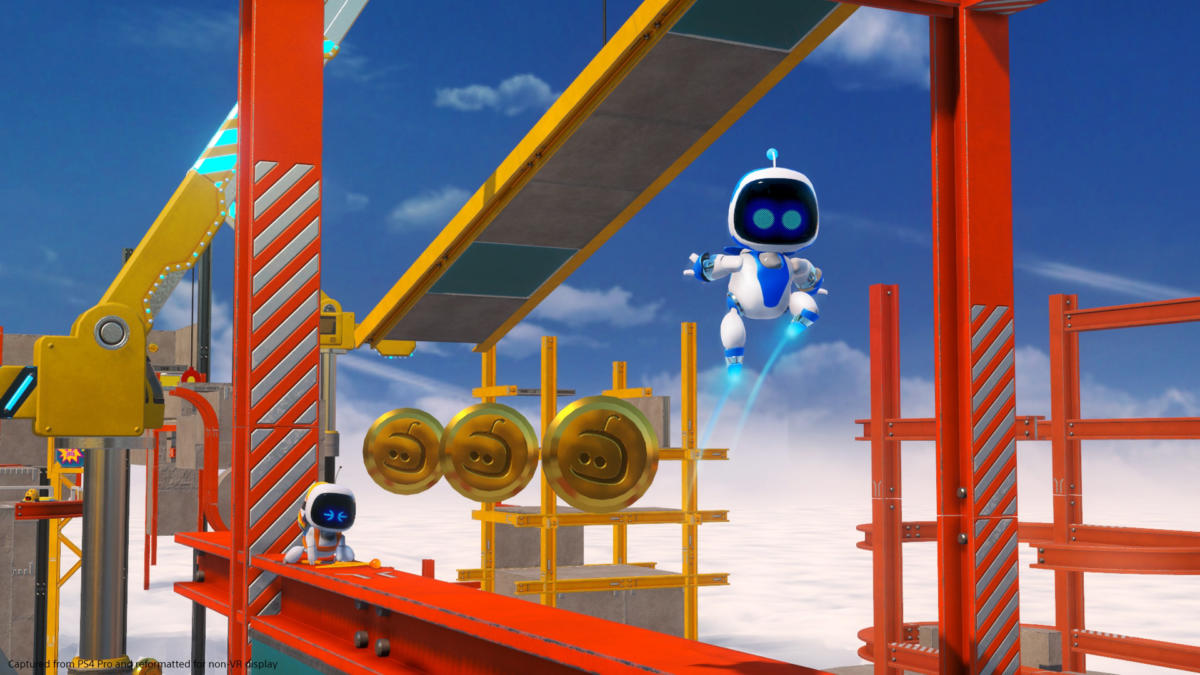 Occasionally, you will be given access to extra tools to be used with the touchpad. These range from attachable ropes to streams of water and even a gatling gun. My favourite of these, however, was the flashlight you receive just the one time for a horror-themed level. Aiming the DualShock lightbar at ghosts scares them away, but it’s also used to highlight the hidden paths you need to take in a mechanic that will constantly make you coo with appreciation. It may be the closest thing to Luigi’s Mansion we see on a PlayStation console, so it’s a shame it’s a brief sojourn to the dark side. 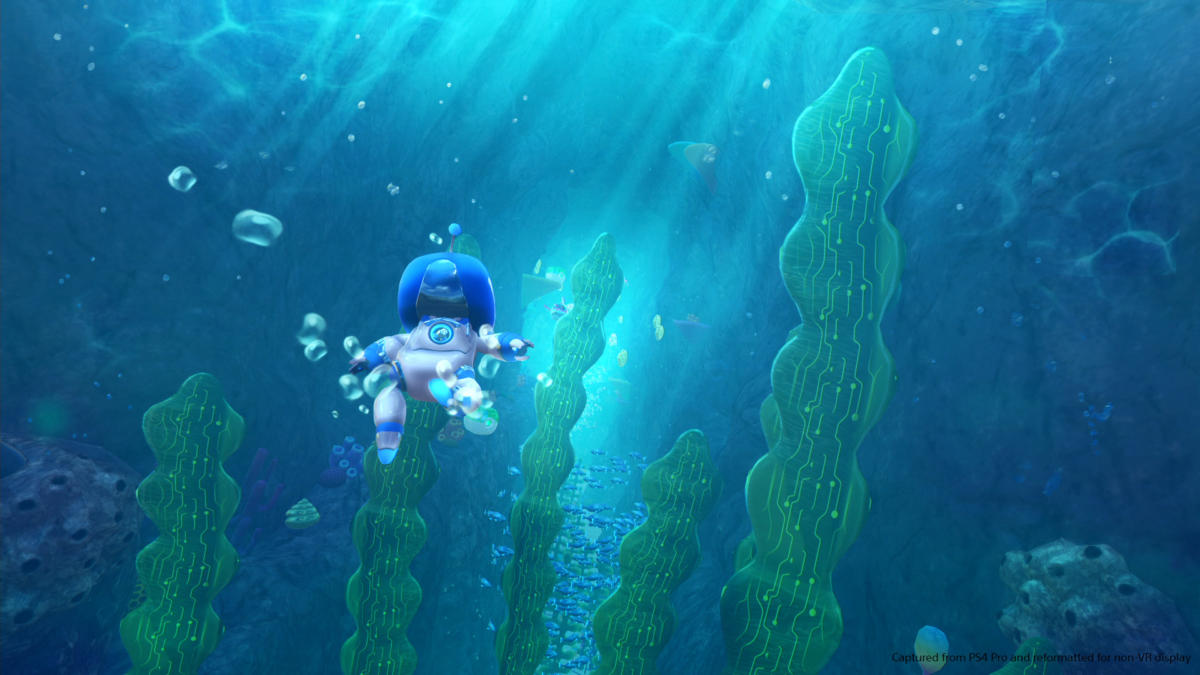 Astro Bot Rescue Mission is at its best when it’s all about the little details, so whether it’s just watching Astro wave back at you when you look right at him or the superbly meta final confrontation, it’s a game that constantly nods and winks at the player. Of note is a section where you emerge from being underwater (the transition in and out of water itself feels oddly satisfying) with seaweed all over your visor, which is then reflected perfectly on your avatar in a nearby mirror. There’s even a trophy for doing something during the interactive end credits that’s sure to raise a wry smile.

Once you’re done with the main meat of the game, Astro Bot Rescue Mission’s collectathon nature — as well it just generally being a joy to play — is likely to keep you coming back until you find all the robots and finish all of the challenges. I dusted off the story in about twelve hours over its 26 stages, but you can add another ten hours or so on if you’re going for total completion. There’s a lot of game here, which is a welcome change for new virtual reality experiences.

As much as its brilliant utilisation of virtual reality is the main draw of Astro Bot Rescue Mission, it’s also not completely perfect. If Astro manages to walk underneath you, it’s a nightmare trying to figure out where he is, likely leading to a case of neck cramp and a disheartening appearance of your second chin. The unusual perspectives you encounter will also play havoc with your depth perception, resulting in more than a few deathly plummets when you miscalculate a jump. It can provide quite a cynical learning curve at times too, making it an inevitability that you will die and then be given the solution to a problem.

My biggest gripe with Astro Bot Rescue Mission, however, is the — and this may sound silly to anyone who’s ever messed around in The Playroom for more than a second — utter lack of story. The opening of the game is about as deep as it gets, there’s no real undercurrent or arc. It just exists. It’s a bit of a waste considering how the many worlds seem to contain understated lore, such as the fact that these robots seemingly have skeletons and that they might have been involved in a genocide? It made me more morbidly fascinated the more I encountered it.

Perhaps I am missing the point of Astro Bot Rescue Mission entirely, however. In a sea of dark and gritty games that take themselves far too seriously, it’s nice to have the respite provided by kicking little robots up the backside and then flossing in celebration at the end of the level. Astro Bot Rescue Mission is silly and eccentric, and sometimes that’s all you need from a video game.

Verdict
Don't let Astro Bot Rescue Mission pass you by: it's one of the most innovative and downright fun PlayStation VR games you're ever likely to play. Microtransactions: none
8.5