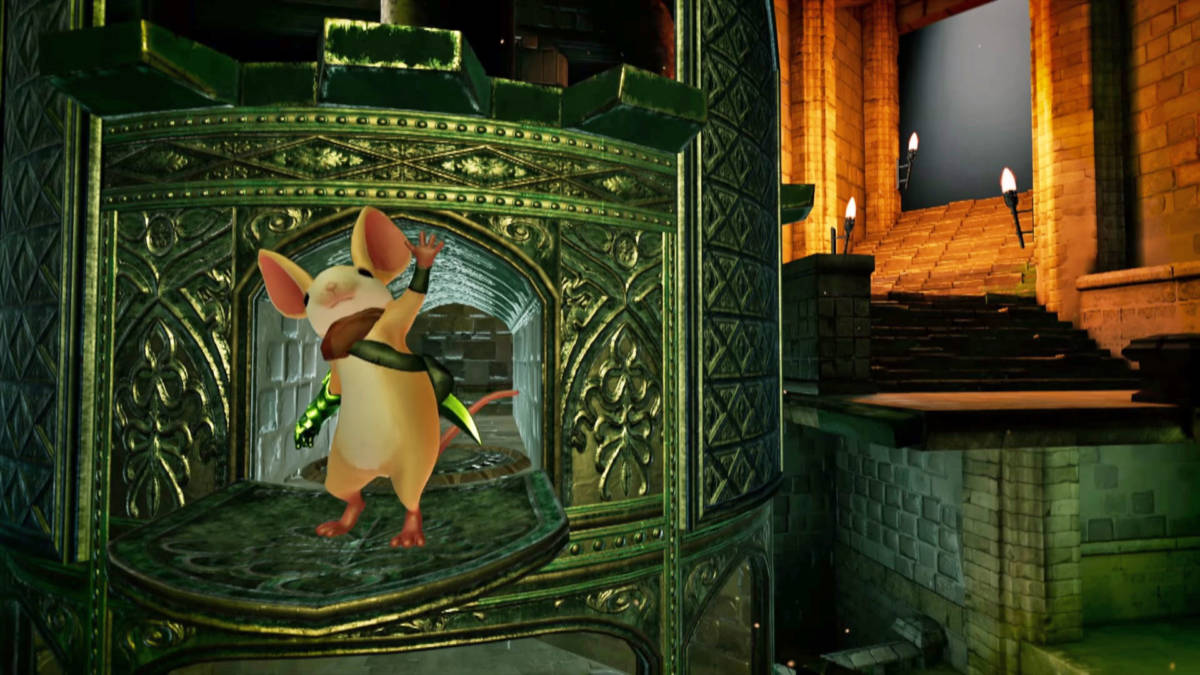 Third-person games just don’t work in virtual reality. Of the games I’ve played to date, none of them have done anything to really warrant VR, making it feel like a misguided gimmick to try and help it stand out in a crowd. At least, that’s what I thought before I played Polyarc’s effortlessly charming Moss: a heartwarming fairytale that blends the best of both worlds.

You play as Quill, a very small and very adorable mouse as she traverses a world ravaged by war with her people cast down from their former glory. I don’t really want to say more than that as Moss is a brief game with a story that gently unfurls throughout its three or four hours of gameplay. Even though it’s a bite-sized fable, the one Moss provides is so full of heart and endearingly told that you can’t help but get swept up in it and be transported back to your childhood bedtime stories.

To aid her in her quest, you also play as The Reader: an overseer who guides Quill with the help of a magical book. This might sound confusing, but the genius way in which you control two characters in VR is so ingenious and fluid that I am surprised it hasn’t been done before, or at least this well.

As The Reader, you can control the many enemies that Quill will encounter and move certain items and mechanisms in the environment. Think of Moss’ levels as dioramas with moving pieces; they all feel like they’ve been ripped straight out of an artbook and brought to life. Even with a base PS4 and the lower fidelity that comes with it, Moss is a gorgeous affair and gave me some of my biggest ‘wow’ moments since I first tried on a VR headset.

Quill is controlled with the DualShock in pretty standard ways: left stick to move, square to attack, and so on. It’s when you play as The Reader, however, that Moss really begins to shine like the little diamond that it is. The DualShock 4’s motion controls have always felt like a tacked-on afterthought from Sony to try and give their Move failure from the previous generation another subtle go. Moss makes the case for the tech to be used more often. Even if the tracking isn’t always as precise as it needs to be, it’s always rewarding to force an enemy to fire at their friends while Quill mops up the rest of the sorry band.

The brunt of your time with Moss will be spent trying to solve its many puzzles, which thankfully straddle the line between being creative and opaque. As someone with a brain what not always do good, problem solving isn’t exactly my strongest point and I tend to avoid puzzle games as a result, but Moss’ mixture of novel mechanics and low-stakes meant I almost relished a new room and a new obstacle. A few stood out for me, though one that required you to move an exploding enemy across a moving platform to activate a switch was my favourite and a testament to Moss’ outside-the-box thinking. 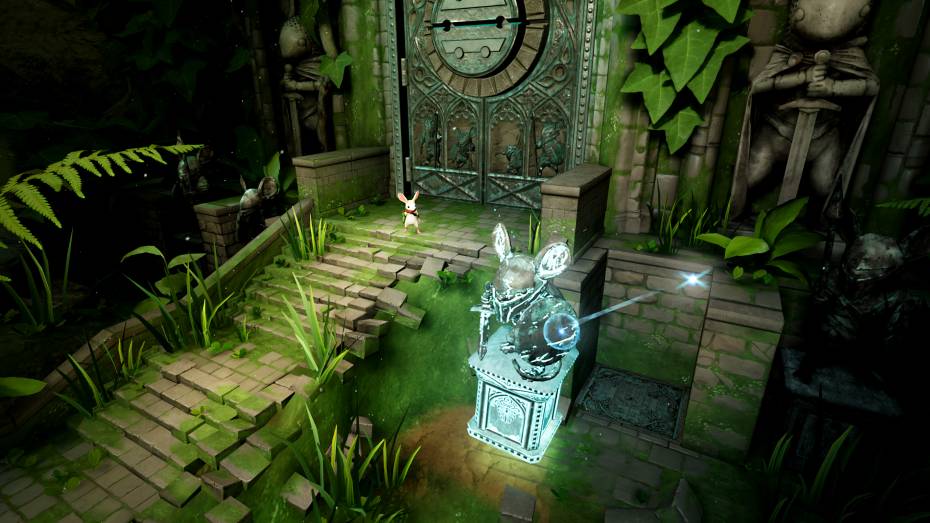 It helps that my desire to make it to the next scenario was buoyed by just how affable Quill is as a protagonist — I really wanted to just watch this tiny mouse succeed. I would often exclaim in despair whenever she died and giggle like a little boy whenever her personality came through, such as when she requested a high five after solving a particularly tricky puzzle. It’s sometimes just worth flailing around in the world to see how Quill reacted; her animations are crazily detailed, whether it be her simply shimmying along a ledge or drying herself after an unwanted bath. You can also bet that about half of my time with Moss was spent petting Quill, even when she became annoyed and would throw me a stern look.

As for the narrative, Moss’ storytelling is handled by a narrator who also provides all the voices in the game. I didn’t catch her name, but her performance here is stellar, no matter the character she’s playing. It’s a fantastic meld of versatile acting and relatability that transports you back to a time of nightlights and warm milk. The overall story may not win any awards for originality and follows some very familiar beats for fantasy fans, but it’s how the story is told that makes it memorable.

If there’s anything to ding Moss down on, it’s that it is so successful at pulling you into its world that it’s almost a shock when it suddenly ends. There isn’t a lot of build to its closing stages and while the sequences certainly become more dramatic and intense for its last twenty minutes, it feels as if there’s something missing, like an added sequence or a prettier bow with which to wrap up proceedings. Granted, you can go back and find some of the collectibles to tick off what is a fairly straightforward trophy list, but the open nature of its conclusion still leaves a sting.

Brief as it may be, it’s hard to deny that Moss might be the new standard for VR platformers. It’s a fantastic and fantastical adventure that will bring out your inner child and, considering the cynical world we live in now, you couldn’t ask for a better respite.

Verdict
Short but irresistibly sweet, Moss may just be one of the best reasons for you to pick up a VR headset. Microtransactions: none
9