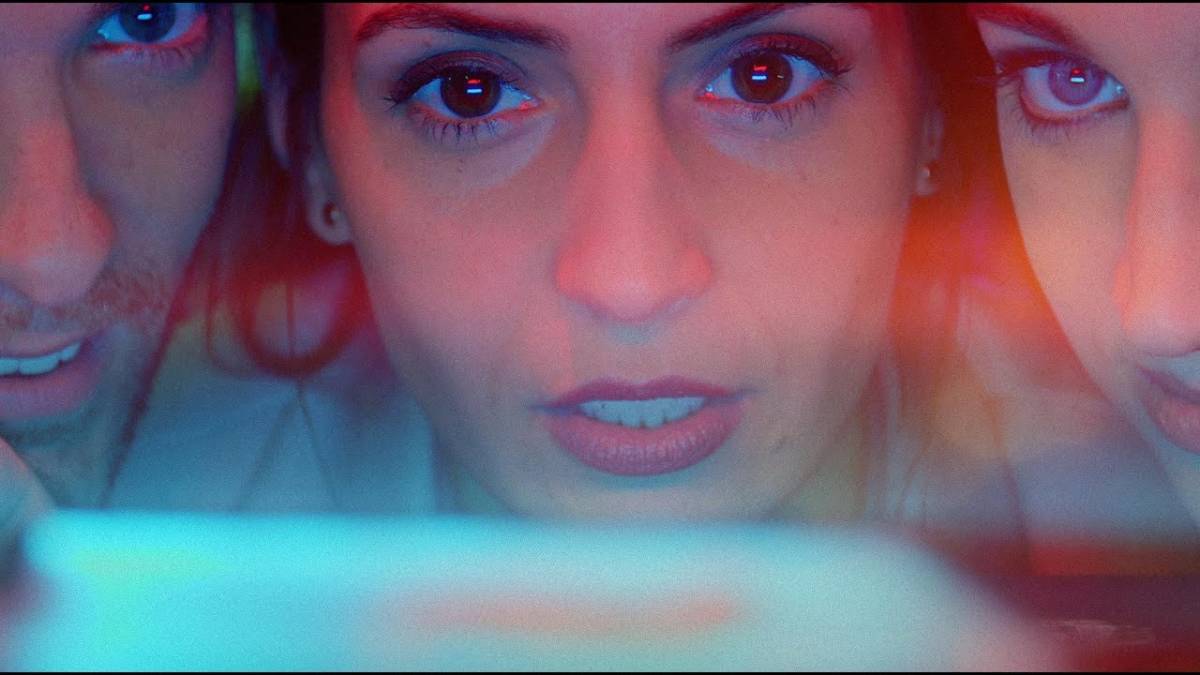 has a lot to say about memory, the reality of memory, and whether we are, ultimately, more than the sum of our memories. Yes, this is a film that tries to prove the existence of the human soul, whatever that is, and it rams its message down our throats with the force of a jackhammer.

So, yeah, I didn’t buy the philosophy behind the flick, but I certainly dug its atmosphere, the tension-building and the sometimes-surreal visuals. I had a lot of fun with the movie, despite its attempts to rise too far above its B-movie aesthetics. Sure, you throw around a bunch of scientific mumbo-jumbo about computer worms and wormholes, and as long as that stuff doesn’t weigh the plot down too much, we’re golden. Which is to say that Anti Matter is perhaps more engrossing than it has any right to be.

There’s a lot of heart here, even if the film does seem a little miscast. There’s no chemistry between the supposedly lovestruck leads Ana (Yaiza Figueroa) and Nate (Tom Barber-Duffy), though the actors are clearly trying hard. Barber-Duffy is just in the wrong movie here. He lacks the kind of charisma needed for a romantic lead, at least of this sort. Figueroa is charming and more than competent and might have had more chemistry with a different partner.

So Anti Matter is one of those movies where graduate students are able to dedicate seemingly unlimited leisure time to devote themselves to a huge project of their own that’s more or less illegal. In that sense, the premise reminded me of Flatliners, though at least with that movie you saw the students attend class a few times. And the project that the Anti Matter group are working on? Basically, they’ve found a way to teleport objects using wormholes. They’ve transported inanimate objects, small critters, and even a cat. And now it’s time for a human subject. So Ana, who conceived the project, is the first one to try it. Things don’t go too well for her after that, as you can probably imagine. Ana can’t form new memories and people in monkey masks are stealing shit out of her apartment and assaulting her.

From a purely visual standpoint, the second act of the film is great. We go on a Lynchian ride of sorts. Ana’s mind plays tricks on her and all sorts of people turn into ape mask-wearing psychopaths.

It’s a neat journey into the heart of paranoia. This is the good stuff right here. There’s even a point where you wonder whether going through the wormhole gave Ana superpowers because she gets into a bit of a Matrix-inspired fight with one of the people in monkey masks and the two of them end up tumbling out of her second-story apartment and into an alley and neither of them are hurt. It all makes sense when you get to the end and everything is explained, but as the scene unfolds, it’s so far left-field tonally that it comes dangerously close to taking the viewer out of the movie. Still, it is visually enticing.

You’ll probably be able to guess at least part of the big reveal as the third act pulls into view. It’s pretty obvious, which makes the final confrontation and resolution disappointing at best. There’s a lot of preachifying and the whole “soul” thing comes up again. The philosophical dialogue that goes on through the movie isn’t incredibly convincing, and it adds an all too serious vibe to something that could be good old fashioned camp. If you can get past all of that, though, there’s a lot of enjoyment to be found.

Anti Matter was released on VOD and theatrically on September 8th.