Animal Crossing: New Horizons: How To Catch The Oarfish 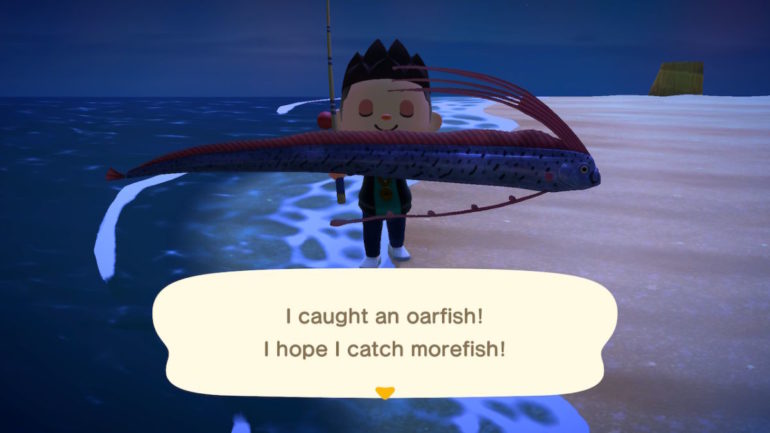 Animal Crossing: New Horizons is a game developed to be played slowly, for you to take your time and discover everything it has to offer over short bursts. Or, if you’re anything like me, you want to hoover up every single fish possible, including the absolutely gigantic oarfish.

Comically large to the point where it won’t fit in a conventional tank, the oarfish is based on the real life equivalent that I had no idea existed but have since decided need to be stopped at all costs.

As for how to catch them and where to find them, you will need to find some shadowed water around the circumference of an island. We have found it on our own island and even a mystery island visited by purchasing a Nook Miles Ticket.  You will not be able to catch the oarfish in something like a pond, just the shadowed area.

You will just need a fishing rod, no special bait required, though it may help if you can’t see any fish in the shadowed water initially.

You will know it’s an oarfish if it’s fairly large fish shadow, and also that your controller/Joy-Cons vibrate pretty violently and requires plenty of mashing of the A button.

You can find the oarfish during March 2020, though they may become rotated in at a later date again — it’s unclear just how the fish rotation in New Horizons works just yet.

As for what you get out of the catch, you can give one to Blathers for his museum, display it in a rather useless tank that takes up too much room, or sell it for a big 9000 Bells.

READ NEXT: Animal Crossing New Horizons: How To Customize Your NookPhone