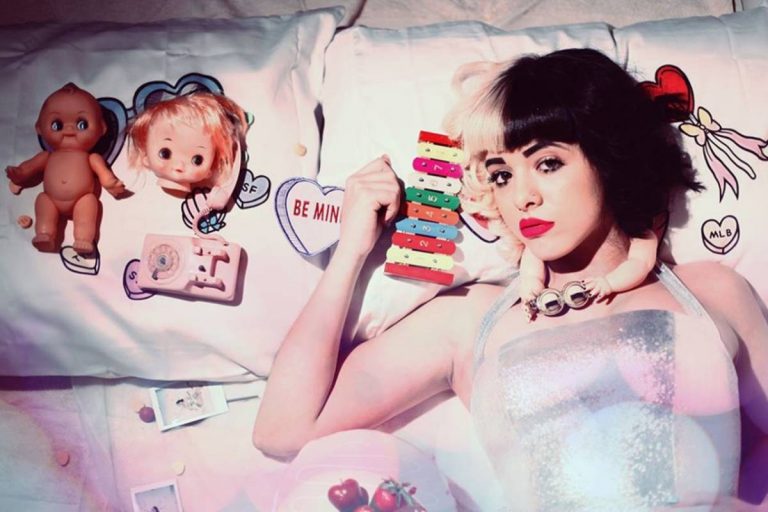 Melanie Martinez was first exposed to the public eye when she was a contestant on The Voice USA 2012. Auditioning with Toxic by Britney Spears, she managed to turn the somewhat tacky sex -driven song into an ambient acoustic version; already this early on she was able to make a well-known song to fit her own style. Now rather than listening to her turning a song into her own, we get to listen to her actual style as an artist rather than another washed away ex-contestant.

On the 14th of August, the 20-year-old released her debut album, Cry Baby

. Since 2013, we’ve been drip fed parts of this album and now we’ve ended up with the final product. Martinez has been true to her sound and has stayed consistent. However, at some parts of the album. the repetitiveness become mundane. The majority of the songs are faded as they sound too similar to one another, but the ones that have that edgy sound and are lyrically alluring shows off her well-rounded talents as a singer/songwriter, specifically Soap.

Coming out of high school recently, it’s clear that her English skills aren’t that of a cheap perfume type; to linger for only moments before diffusing away. Her English skills are that of an expensive perfume as her songs are metaphorically strong because the girl has a way with her words. On the exterior, she’s almost like a doll, delicate and fragile but like a deconstructed doll dipped into some paint. It’s all innocent and childlike, as are the titles of her songs, like Milk and Cookies, Dollhouse, Tag You’re It and Mrs. Potato Head.

When listening to the album, initially I thought it was another “I loved you, but it didn’t work blah blah blah” sort of album but she managed to tackle some serious issues. Specifically in Dollhouse and Mrs. Potato Head, gowning up in the generation where looks are nearly everything and young people undergoing treatment is almost a fashion statement. The song’s rather passive aggressive – she’ll say go do it, but in a sarcastic way, making her even more likeable. “Don’t be dramatic it’s only some plastic, no one will love you if you’re unattractive”, this part is repeated in Mrs. Potato Head, creating emphasis on the ordeal that people have in order to understand the true concepts of beauty and self-acceptance.

One of my favourite songs on the whole album was Alphabet Boy: the melody is soothing and the xylophone complimented her soft childlike voice yet juxtaposed the indie electronic vibe. When dropping the numerous F bombs in this track, it was like listening to a toddler saying “fuck off”; funny, cute and shocking. This song is like a “fuck you” to the elites, who are lucky enough to pay their way to get diploma or degree, but she makes sure to highlight the fact that money doesn’t make your smarter or a better person, she’s sure to prove herself in this world, and so she will. So what does Martinez have say about all this? “I say fuck your degree alphabet boy”

Overall, I was half and half on this album, there’s a lot of potential. Some of the songs sounded too similar, but there were some that really did kick-ass, both musically and morally as she sang about real issues. Her songs become universal to a wider audience, although this did mean losing that personal, nostalgic and authentic touch from her as an artist. After you’ve listened to this album, or at least some of the songs and you’re still unsure on Melanie Martinez, listen to her covers from The Voice USA, then judge her as an artist, rather than just on this one album.