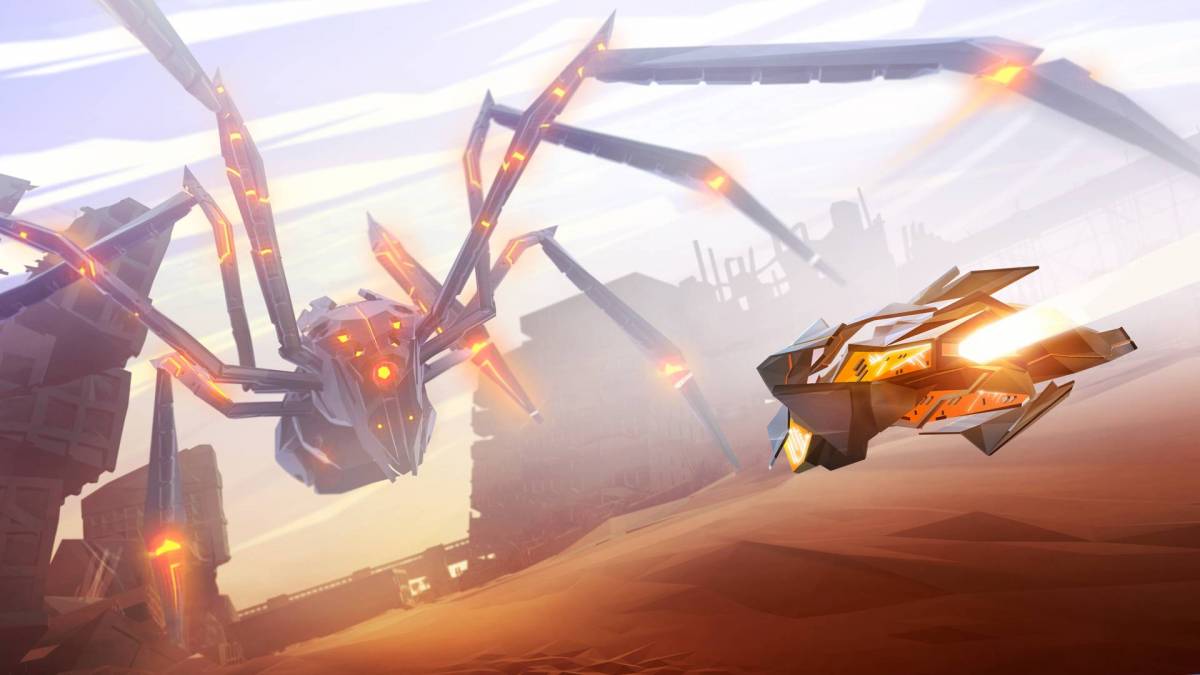 A novel premise that will endear itself immediately to fans of Rez, Aaero is an on-rails twin-stick actioner with EDM -and probably more subgenres that I am too uncool to appreciate- at its core. The goal is simple but irresistibly addictive to accomplish over and over again: guide your spaceship through a stage. Hundreds, maybe even thousands, have done this before, though Aaero doesn’t do just that. It takes two ideas, blends them, and adds a whole lot of bass to great success.

There are the standard “lanes” to match with the movement of your ship, reminiscent of the storage clutter that is the Guitar Hero series, but it’s actually more in keeping with something like Entwined. Pinpoint precision is required to stay “on track”, as it were, as the bassline, synth, and even vocals fluctuate all over the place. Consoles receive a lot of flack for not having as much fluidity in movement as their PC counterparts, but two-man team Mad Fellows Games have somehow made every inch of trajectory feel as smooth as a headfirst dive down a mountain of warm butter here. It almost took me by surprise, making its steep learning curve that much harsher.

Where Aaero truly shines, however, is in its enemy battles. Shooting is determined by the right stick, allowing you to tag the attacking ships until the right beat in the song comes along. Unleash hell at the right point and watch your multiplier skyrocket. This wasn’t something I was actually familiar with until I was halfway through the game, blinking in disbelief at the scores posted on the leaderboards. I never managed to crack the top 100 across any of the stages, which should hardly come as a surprise when the scores were three times higher than mine. Completionists and perfectionists are going to be in their element with Aaero.

There are even boss battles, if you can call them that. Leviathans are attackable in bursts between keeping the regular line-tracking rhythm sections, and these encounters stand out the most. It’s not common that a game astounds me, being the cynical internet denizen that I am, but the scale of these Shadow of the Dance Dance Revolution encounters left me with my mouth agape. One in particular sees you navigate through a sandworm’s insides and then out again to try to take it down. It could have been very easy for Mad Fellows Games to not change the formula and coast along, but they didn’t and it paid off for them.

The landscapes of Aaero aren’t overshadowed by its soundscapes, either. It owes a lot to Rez, that’s clear, but instead of crafting a simple homage to the work of Tetsuya Mizuguchi, there’s enough personality invested into Mad Fellows Games that’s almost worth roleplaying as a space pirate who loves dirty beats. Something bad has happened to the worlds of Aaero, which is only ever implied. If you look between the lines, there is something interesting hiding beneath.

As effusively as I am praising it, Aaero does have one inherent problem: its music. For anyone who loves EDM et al and always wondered what a post-apocalyptic frenetic rave might be like, powering through the more complex stages and even the higher difficulties is sure to delight. Personally, as someone who only pretended to like dubstep for a summer of debauchery that I don’t want to say anymore about, it does become grating to hear the same song again and again if you fail. A lot of it is repetitive by nature and as someone who can’t sleep with a ticking clock in the same room, it was a big wall in stopping me from trying to crack the leaderboards or get somewhere close to mastery of the game.

That being said, the tracklist is varied enough to make that less of an issue and even less if played in shorter bursts. Names like Flux Pavilion, Noisia, and Katy B headline the sounds on show, but names like SUBhuman more than hold their own. Once you’ve beaten the tracks, it’s always tempting to dive back in and better your scores, or even just relax and mentally ready yourself in the morning. Aaero is weirdly as effective as coffee in getting rid of the cobwebs.

If you’re stuck for something to play during this “rest” period in a hectic video game release schedule, take a chance on Aaero. You’ll probably wub i–sorry, I mean love it.

Verdict
Even if you don't have a soft spot for EDM, Aaero's infectious and addictive gameplay will keep you coming back.
8
Cultured Vultures is a pop culture website established in 2013 covering all things gaming, movies, and more. We eat your words.
All The News On The Biggest Games