The Legend of Zelda: Majora’s Mask – A Retrospective 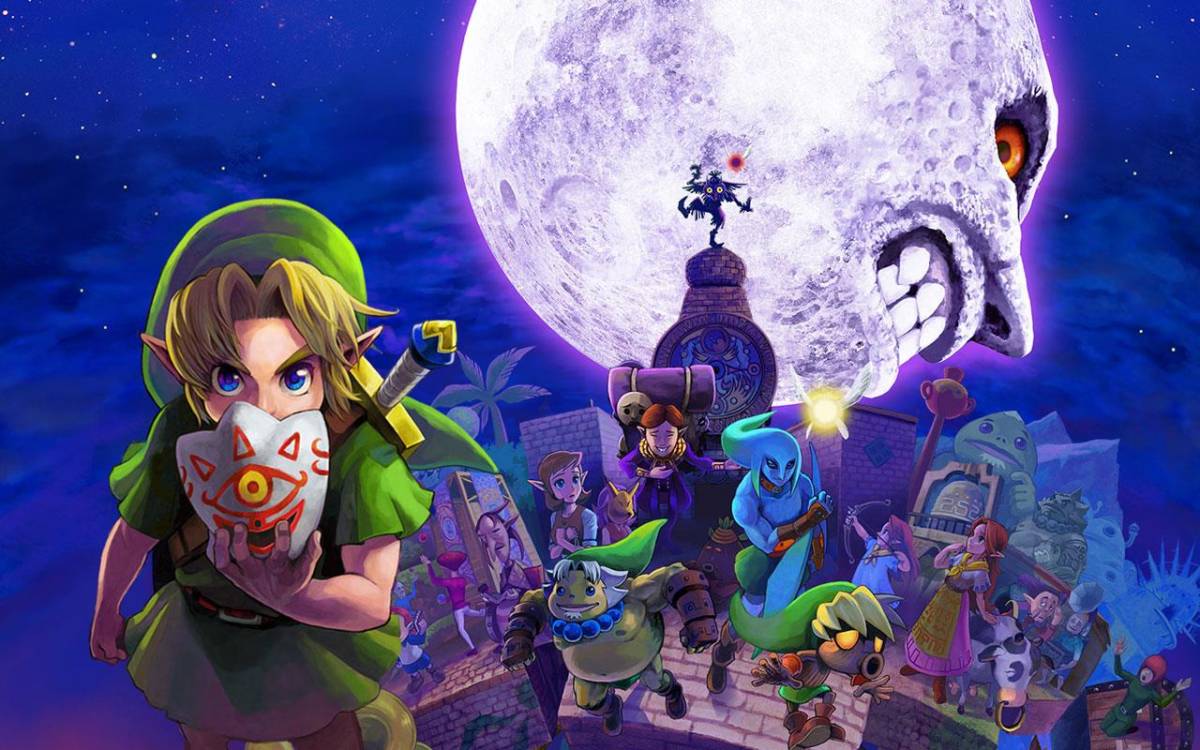 Very few games can claim to have come from a comparable pedigree to that of Majora’s Mask. I mean, how could they? It comes on the back of – disputably – the greatest game of all time, a top five SNES title, that, ahem, absolute fucking abomination of a TV show and a CDI title that is somehow worse than that aforementioned TV programme. Well, if you ignore the latter half, it is a great pedigree. With this in mind, it shouldn’t be surprising that Majora’s Mask was a cracking title.

Although, what did come as a shock was that Nintendo managed to pump out another classic barely a year after Ocarina of Time’s release, blending a plethora of fresh ideas to give MM its own identity. Yes, many assets, characters, items, and music were reused, but everything was darker, creepier and warped. Skull Kid, for instance, is the main antagonist in MM, wanting as he does to bring an end to the world of Termina by smashing a menacing, gurning moon against its surface, but in Ocarina of Time he was a relaxed forest child who wished to live a quiet, tranquil life.

The story of MM follows Link, who has 72 hours to gain the support of the four gods and defeat the Skull Kid in order to stop the moon from crashing into Termina. All of this is impossible to do in one three day cycle, so Link will need to repeatedly turn back time at the end of each cycle until he has stopped the moon from falling. However, turning back time is never an easy decision as every dungeon that has been completed or person that has been helped becomes undone, and it is heart-wrenching to watch Link play the song on his Ocarina that will turn back the clock. Equally, fighting the Skull Kid raises an ethical dilemma as his every thought, move and action is dictated by an evil mask. During one point, Skull Kid earnestly asks Link if he wants to play a game “ O.K, let’s play good guys and bad guys… I will be the good guy”.

Although, due to the limitations of the N64 hardware, creating an emotionally charged experience was always going to be an uphill battle. The characters, for instance, go about their daily routines with unwavering conviction; if you stand in their way, they push past; if you talk to them, time temporarily stops. In this respect, the experience felt artificial as you had little influence on their lives outside of completing quests and relating to characters who act robotically requires suspension of disbelief.

Moving on to the gameplay, like any Zelda, it is an almost peerless experience. MM has many similarities to Ocarina. It uses many of the same items, Links feels and controls the same, and the level design is quite similar, too. However, these similarities are never a detriment to the experience; conversely, the gameplay has been slightly refined and improved upon. A large portion of the differences between the two games lies in the usage of masks. Over the course of game, the player will attain three important transformational masks, as well as a fourth mask that will be used solely during one boss battle.

Each of these masks is primarily used in one of the games four dungeons. The exception being the fourth dungeon that forces players to switch between these transformations in order to complete various challenges. The third dungeon, Greatbay Temple, is one of the few Zelda dungeons that I dislike. During this dungeon, Link has to navigate through underwater pipes and change the direction of the water flow so he can move through pipes that flow the opposite direction. The problem with this segment is that if you have changed the water flow and forgotten to complete an essential objective or pick up an important item, you will have to go back to the start of the level and move through all of these cumbersome pipes once more.

However, the player is not bound by these transformations whilst in any of these temples. Link can switch between his human form, any of the transformational masks, or the other 24 masks, which have their own perks. For example, the Blast Mask allows Link to explode, destroying breakable walls or killing nearby enemies, and Bunny Hood can be used to can be used to gain a quicker movement speed, enabling Link to move quickly through a dungeon or dodge some incoming attacks with ease.

These collectible masks can be attained by completing a number of set tasks. Some of these tasks are easy to complete and will only take seconds, whilst other challenges require a handful of objectives to be completed over the three days before a reward is given. Occasionally, some of these challenges require the player to remember who they have previously met and, fortunately, a journal is provided that allows the player to keep track of important information.

This handy journal tracks the time an event will occur and what players need to do in order to finish one of the 24 mask quests. Frustratingly, though, the journal doesn’t elicit where an event will occur and it can be incredibly difficult to track down the person that you need, especially since these people change locations regularly during the three day cycle.

Going back to the time element, there was an occasions when I only had a couple of hours left but I was approaching the end of a dungeon. The question arose: should I retreat and try again with a full 72 hours or attempt to complete it in the time remaining. I opted for the latter and ran out of time during a boss battle. The fear of failure can be overwhelming – something very few games have achieved. There are even some mask related objectives that occur within the final minutes and the fear of failure mixed with anticipation is truly palpable.

For the most part, the gameplay within MM is similar to that of Ocarina and, unsurprisingly, those parts are a joy to play. The parts that are different: the four transformational masks, being able to control time within a 72 hour window, and the ability to collect a bevy of masks are all thoroughly entertaining gameplay additions. I also loved that other items such as ice arrows got a lot more love in the sequel, allowing players to freeze up water in order to jump across to other locations. Bunny Hood, purely a trinket from a quest in Ocarina, is turned into a useful item that enables Link to dash and jump further. Some of these masks are more useful than others, but all of them are fun to collect and the variation between the required tasks keeps it from venturing in to collectathon territory.

The soundtrack is a delicious mix of altered songs from Ocarina of Time and a number of new tracks. The extraordinarily talented Koji Kondo orchestrated a soundtrack that effectively conveys the creepy and gloomy tones of MM. During the second and third days, the music in the game’s central area, Clocktown, becomes progressively quicker, encapsulating the fear caused by the approaching moon. Other tracks such as the haunting Song of Healing manage to be unsettling simply by using off-key piano. Even tracks that will be encountered only once or twice such as the song that plays in the Astral Observatory are both sumptuously rich and unnerving.

Equally as important in creating melancholy in the world of Termina were the visuals. The game fully utilised the Expansion Pak’s extra 4mb of memory  that enabled smooth and detailed visuals. MM heavily uses shadows, dark colours, and some nightmarish character designs, but Nintendo knew where and when to rein it in a little bit, further emphasising the areas that are dark. The graphics were incomparable on the N64, but it was its ability to create unease that has left a permanent impression in my mind.

Zelda games have never been short of dark moments, but these moments are usually scattered throughout the game or used as a prop for a joke. Majora’s Mask is just one large concentrated dose of darkness and it is glorious. It is easy to see why the experience would alienate some gamers as it is gloomy, difficult and requires patience that some gamers -especially the current generation who are used to games that regularly handhold – do not have, but even a good portion of those players will enjoy the experience if they are willing to persevere.

The graphics, soundtrack, gameplay, and characters are all of the highest standard and work cohesively to create an unforgeable title that many would argue is better than Ocarina of Time. Whether you overlooked Majora’s Mask when it was released, you didn’t complete it at the time, or you are not a fan of action-adventure titles, I recommend everyone to check this game out.