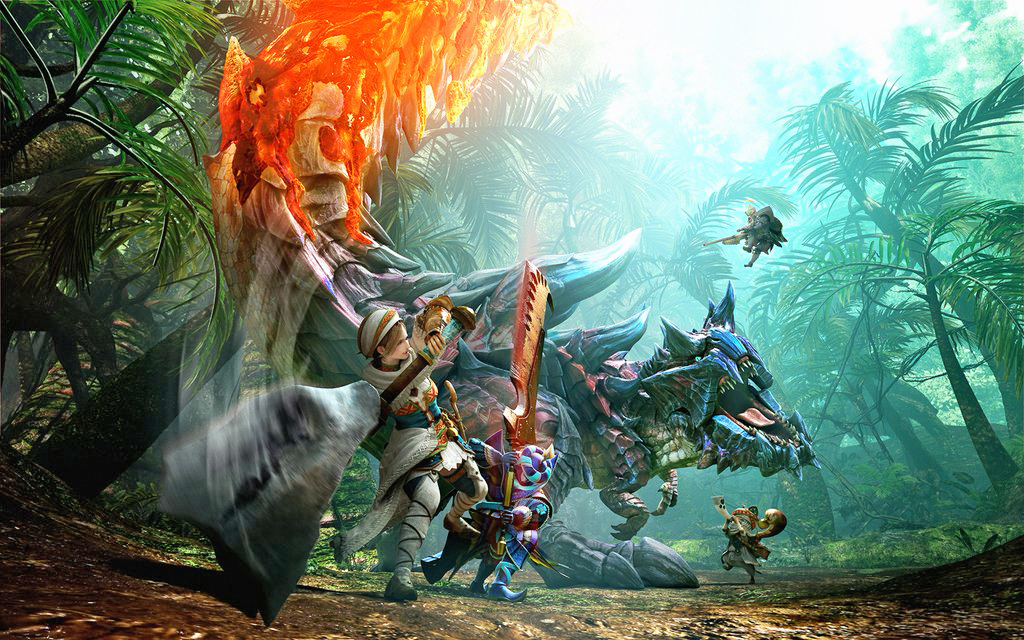 I have a slight confession to make. With the exception of playing a little bit of the first Monster Hunter on PS2 at a friend’s house however many years ago, MHG is my first proper taste of the cult franchise. Being marketed as it is as somewhat of a greatest hits release, I thought this the perfect jumping-off point into unknown territory, in much the same way as a greatest hits album of a recording artist you feel like you should know more about is.

And this is kind of exactly that- a highlight reel and who’s who of the myriad giant beasts found in the last four(ish) games, often without context but not at the detriment of player enjoyment. The lack of context around the mechanics that make up the game, however, are severely lacking if you aren’t already familiar with the franchise, as there is very little in the way of tutorials or even narrative to point you in the direction of most of the games many features.

An example being the pre-hunt meal- I could write an article about that in and of itself, with its subtle influence on the playstyle of your character. Eating the right meal can mean the difference between a fair fight and a total slog, and this is just one of the many, many features that is barely explained at all to the newcomer. That being said, the game is largely skill-based, so once you’ve got to grips with how your chosen weapon handles, you can simply power through the early stages and start to learn the system as you progress. Beginners- learn to let go. It’s the only way you’ll catch up with the series veterans.

After overcoming the initial tidal wave of minutiae that makes up the majority of the between hunt downtime in MHG, there is a lot of fun to be had- especially in co-op with friends. Few games come close to the euphoric relief in experiencing a hard-won victory with your team, and it’s made all the better if you’re gathered in the same room, screaming with joy, 3DS systems flying about the place like the hacked-off detritus of whatever dinosaur/ bird/ demon/ utter bastard hybrid you’ve just slain. There is heaps of content in multiplayer too, and being constantly updated with free DLC, MHG can easily become a staple part of your social gaming for some time.

I thought that with this being the greatest hits of Monster Hunter to date, that after seeing the biggest and baddest enemies the series has had to offer, that I would be rushing out to buy the previous games, but I’m not; there is more than enough content on offer here to convert any patient newcomer to the series. MHG is the sum of more than a decade’s worth of additions to a now tried-and-tested formula, and as such leaves no reason for new players to backtrack. It does, however, leave you wanting a slightly more narrative-centred experience, something that I hope MH5 will deliver. After how much I enjoyed my time with MHG, I’ll be picking it up on launch day regardless.