5 Things About The Phantom Pain That Make No Sense

When you’re playing a Metal Gear Solid game, you will have to quickly come to terms with the fact that not all of it will make sense. Hideo Kojima might be able to think outside the cardboard box, but sometimes it seems as if he needs a slap on the wrist and someone reining him in from doing something silly like adding ghosts to a stealth game or creating a demented rodeo between robots that sound like cows and ninjas.

After playing through Metal Gear Solid V: The Phantom Pain and giving it my first ever 10/10 score, you might expect me to say that it isn’t flawed or that it shouldn’t have any criticism because I am a dirty fanboy, which you might be justified in claiming. No game is perfect: a 10/10 score shouldn’t signify that, it should instead highlight a release that is essential to play and an experience you would be remiss to miss.

With that being said, here are a few of the aspects of The Phantom Pain which left me scratching the debris embedded in my forehead. Important plot points are discussed, so here’s an an obvious warning for…

1. Ocelot is an alright guy

Considering how much of a hymen he is in the games which take place later in the warped, confusing timeline of Metal Gear Solid, there’s definitely a disparity between the Ocelot we see in The Phantom Pain and the one who sinks a tanker filled with Navy SEALS, Liquid arm or not.

He has compassion for the war-afflicted children who arrive at Mother Base, seems to begrudgingly love training D-Dog for you and has a brighter outlook on life than anyone else in the game. Sure, he might have been a bit silly with all that torturing, but who doesn’t need some of that in their routine?

Reports say that because Konami were trying to save some budget for their very own torture machines to use on their staff, a large part of the story was cut out of The Phantom Pain. Maybe it would have shown Ocelot as the lovable dick that he would grow to become, but it’s doubtful.

2. Kaz is not an alright guy

In Peace Walker, Kazuhira Miller was the voice of reason, the guy who would often object to morally grey decisions and stick by principles. Fast-forward to The Phantom Pain and he is a hard-faced shadow of his former self that just basically wants everyone to die.

As well as baying for the blood of Quiet and Emmerich during almost every other conversation, Kaz shows little love for generally being alive, painting a picture of himself as a self-hating cripple. Although the toils of war taking an effect on his personality is understandable, it’s a jarring change from the Kaz of old and one which none of the other characters even question.

Through a few neat visual effects in cutscenes, we see the big change in Kaz, but it’s not enough to justify him becoming so suddenly unlikable. It isn’t helped by he and Phantom’s oddly one-sided conversations throughout and the revelation concerning Phantom being the catalyst for an all-out war between them seems weak at best.

Okay, so there is some justification behind this one. As mentioned, Konami started getting antsy about handing money over, meaning Kojima had to cut the story short and end on a limp note. However, despite being fleshed out more in a few cassette tapes, Eli’s character is one that just confuses.

A product of the Les Enfants Terribles project, the younger Liquid Snake has an incessant attitude problem and a singular hatred for Big Boss. After escaping with the war children and Sahel..Sahl..Shaaell…the gigantic Metal Gear, Eli disappears with no further explanation given about what happens. As it turns out, there was a huge showdown between Eli’s group and Diamond Dogs that ended up on the cutting room floor, taking necessary character exposition and a satisfying climax to the game with it. 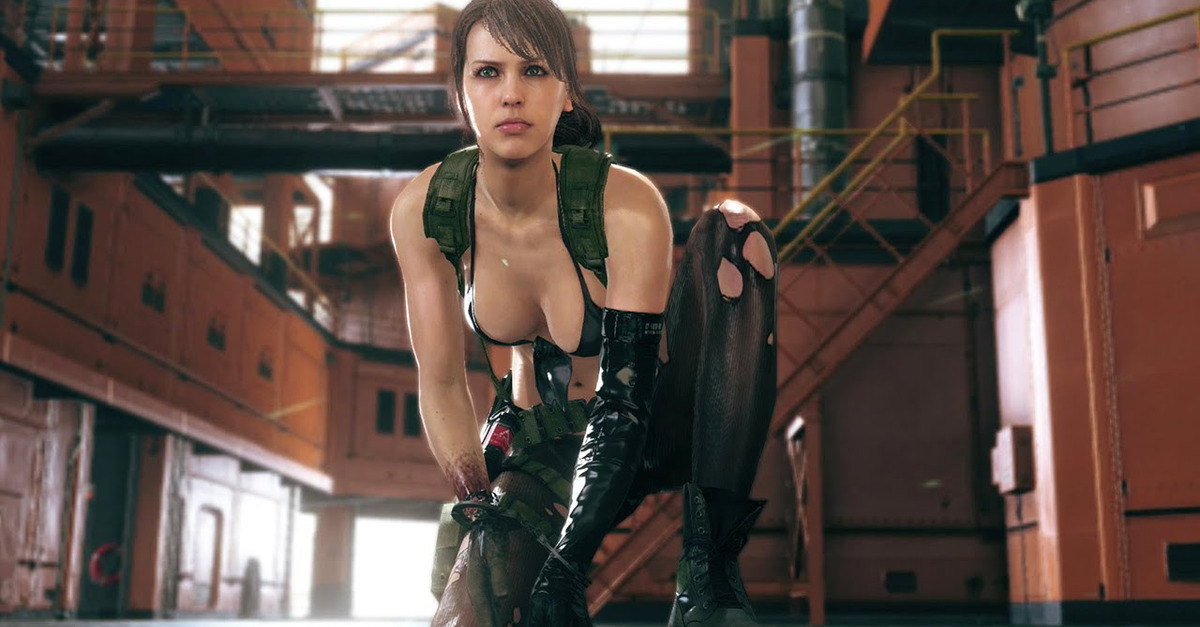 It would be too easy to just write “pen and paper” and walk away when it comes to Quiet’s entire character. Despite mastering languages, Quiet doesn’t seem smart enough to realise that she could simply write out her communication instead of speaking deadly English.

As far as convoluted reasoning goes, Quiet’s silence is one of the worst explained. After being infected with a parasite by Skull Face that will cause everyone around her to also be infected if she speaks English. Casting aside how long-winded and downright silly the whole parasite angle is, why couldn’t the team at Mother Base have searched for an interpreter or better yet, why didn’t she just scribe everything? Instead of splashing about with Venom and sharing longing looks, she could have taken time out of her busy schedule of being naked to seek out a notepad.

And don’t even get me started on that “breathing out of her skin” nonsense bollocks. If The End can keep his supple rump under wraps, so can Quiet.

5. Everything about Venom Snake

I had to think long and hard about whether or not the awful ending of TPP should bring my score down overall because it’s just that much of slap to the face. After discovering that I had been playing as the medic seen in the climax of Ground Zeroes the whole time, the entire experience felt cheapened for a completely unnecessary and sequel-baiting finale.

Quite how hypnotherapy and ridiculously advanced plastic surgery would convince someone and their peers that they are Big Boss is one that I will leave to the medical professionals, but it seems like a stretch that we are all expected to just deal with because Metal fucking Gear. How convenient it is that the medic just happened to have the same voice and frame as the legendary mercenary, as well that he is able to replicate his plethora of combat skills thanks to a few words from Zero.

It also just goes on to poke even more holes into the Metal Gear canon rather than give any meaningful clarification. The differences between Big Boss in Metal Gear 1 and 2 now make sense, but did Kojima really go through all the trouble to clear up a plot hole that is thirty years old and inadvertently create dozens more in the process? Was Big Boss really just lying in a bed next to Venom for nine years and biding his time until he came out of his coma? Who even is Venom, really?

Worse still, the revelation makes all of your toil throughout The Phantom Pain seem…pointless. This was supposed to be the closing of the book in the story of Big Boss, not a random middle chapter that veers off in a hundred directions and ends with “deal with it” as its closing sentence.