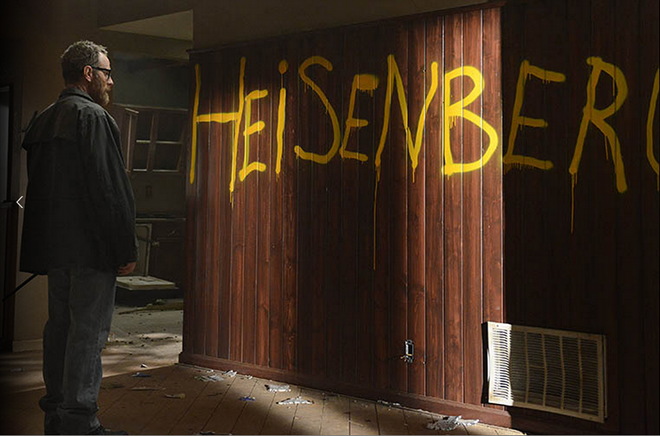 You may have noticed a certain article creeping around on your Facebook News Feed over the past week and you may have been one of the unlucky few to bite at its alluring hook. The piece in question is misleading, poorly written, without basis and the very definition of clickbait that is giving online journalism a bad reputation. 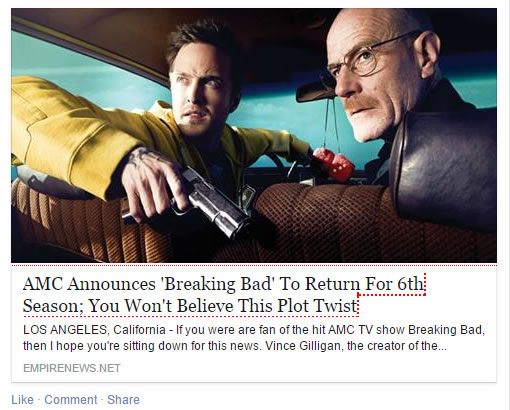 It’s as if it’s just been pushed on some poor copywriter by his viewpire (an editor who lives off the souls of reader views) and filled with the kind of misquoting and invented information that even The Daily Mail would blush at it. And some of you fell for it.

Now, there’s no need for you go and sit in the corner – you’ve just fallen afoul of some very wishful thinking. When Breaking Bad was on, every other show on television paled in comparison, leading performances were based against a Cranston criteria and pop culture had its most powerful overlord since Oceanic Flight 816 first crash landed. It’s completely understandable to want another slice of that blue pie but here are 5 reasons why it’s better off being left in the annals of awesome.

Just ask the writers of Lost, Dexter, Battlestar Galactica and countless other shows: it’s harder than it looks to wrap up a beloved show with all questions answered, each character thread sewn up and the majority of fans pleased with the finished result. Vince Gilligan and his team had no issues with making some tough decisions with the finale and not forsaking their vision just to keep some fans happy. Why risk that for another 12 episodes of filler?

2. You can’t climb higher than a peak.

Breaking Bad represented the high point of everyone involved with the project and doubtlessly even Walter White himself wouldn’t be able to twist enough words to make you think otherwise. Aaron Paul, who used to do cereal commercials and be a goth on run-of-the-mill detective shows, would  most likely admit that his performance as Jesse Pinkman will never personally be topped and the same goes for everyone else involved. The only reason to get the gang back together again would be money.

3. Better Call Saul is going to be a thing.

Even the most optimistic of viewers would say that Better Call Saul won’t quite be capable of reaching the heights of Bad. What we will (hopefully) get instead is a lighter-hearted look at the criminal underbelly of New Mexico with plenty of quips and putdowns from everyone’s favourite lawyer. It might never receive the same kind of plaudits and captivate quite as intensely as its cousin but as long as Bob Odenkirk is involved, myself and every other Breaking Bad fan should be on-board.

A crossover with AMC’s other flagship series, The Walking Dead, may be the only way of seeing more Bad as there are only a handful of characters left after the explosive events of the final season. Backtracking on BB‘s timeline to fill in a couple of gaps might be another way of sating the appetite of fans, but I have three words for you. The. Phantom. Menace.

Ain’t nobody got time for that.

When I say this I mean completely original; nothing based on a book, a spin-off or a goddamn FILM (who even asked for FroM Dusk Til Dawn on the small screen). What I’d like to see more of is a 100% new idea straight from the brain of an exciting new writer that isn’t adapted from anything. The only reason Breaking Bad came about in the first place was because of the studio giving time to an original property so to bring it back would potentially take away the schedule space of its worthy successor.