25 Years Later, Interview With The Vampire Is Still A Charming Bloodfest

"As beautiful and powerful as these vampires are, underneath all that bloodlust still beats a desire for love." 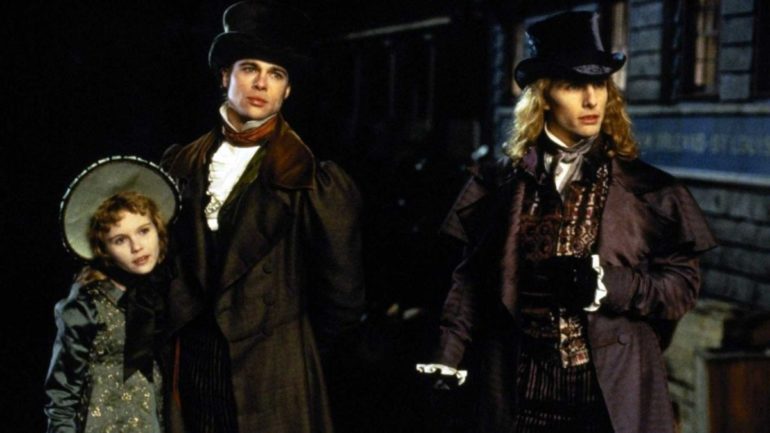 Watching Interview With The Vampire all these years later, I have to say that Brad Pitt was born to play a vampire. He is devastatingly beautiful as Louis. Every time he appears on screen I am taken aback by his beauty, and can see why Lestat (Tom Cruise) couldn’t resist making him his own, despite Louis’ preoccupation with his morality and his refusal to take a human life.

This sentiment is appallingly contrary to what a vampire is supposed to be – predator, bloodthirsty and merciless. It gets him in trouble because he doesn’t feed enough, and subsequently gets overcome by his will to feed on whoever gets close enough. In his moment of weakness he feeds on Claudia, and dooms her to eternal darkness as a child.

As beautiful as Brad Pitt is, Kirsten Dunst is the true scene stealer as Claudia. This is heavy praise considering that she shares the spotlight with both Brad Pitt and Tom Cruise. She shows such great balance between Claudia being a child in appearance but becoming a woman in her mind. There is such pathos for her condition, seen in her constant pining for a full feminine form, but never able to achieve it.

She develops a complicated relationship with Louis, where he is her father and her mother, yet she treats him as her love as well. She shows her jealousy as a woman when Armand (Antonio Banderas) takes an interest in Louis and she fears him leaving her. She also throws childish tantrums, and guilt trips him into making someone else a vampire so that she can be cared for. Then there’s the kiss, right smack on the mouth, communicating her desire for him, yet only able to display it in a chaste manner.

As the movie goes on, a pattern starts to develop: vampires seem to take a liking to Louis. Lestat chooses to turn him, Claudia cannot bear to leave him even though he played a part in dooming her to this life, and Armand wants a life with him. Yes he is a strikingly beautiful man, but it’s more than just that. Louis, despite his vampiric status, still has a firm grasp on his humanity. He values human life and scorns everything the vampires stand for. This is what they sense in him, the potential for connection and intimacy.

After years of experiencing lives driven by bloodlust, they want more. Unfortunately, they go about it the wrong way. Lestat seeks to force his hand by feeding in front of him, however this casual dismissal of human life serves to disgust him more than seduce him. In order to trap him, Lestat creates a child with him, forming a family unit with the two of them as parents to Claudia. But as we know, broken relationships do not heal because there is a child within it, so the two purge themselves of Lestat’s toxic presence by literally feeding him tainted blood (the blood of a corpse) – seems a bit on the nose, but immortality has no time for subtlety.

Armand is tired of the vulgar shows the vampires put on every night, which highlights the absence of their humanity and showcases their monstrosity as they feed on innocent people in such crude, public displays. He desires a relationship with Louis, who in turn seems to reciprocate these sentiments more than he ever did with Lestat. However, instead of allowing Louis to come to him of his own volition, he allows his group of vampires to put Claudia on trial and to burn for what she did to Lestat. He plays the great hero in rescuing Louis, yet fails to see what moves his heart. Louis could never love someone who so utterly destroyed the only family he had left in the world. As beautiful and powerful as these vampires are, underneath all that bloodlust still beats a desire for love. It is the great emotion that has the capacity to move even monsters.

At the end, after Louis is done with the story he is narrating to Malloy (Christian Slater), instead of the tale reminding the man to cherish his human-ness, he desires to become a vampire like Louis. This surprises us, since we have been privy to the tale much like Malloy has, and becoming wrapped up in the dark world of vampires is the last thing on our minds. Ultimately, Malloy’s desire demonstrates how we are forever lured by beauty, power and immortality, willing to discard our humanity in this pursuit, even when we should know better. Louis’ tale is a cautionary one, to warn us about the monsters we can very easily become, if we choose to do so.