See you at Papu's Pyramid, chumps. 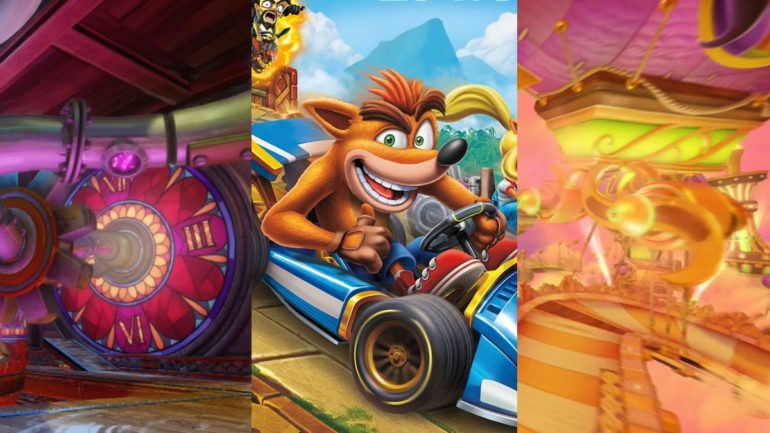 I didn’t play the original Crash Team Racing when it first came out and that was my mistake. But after college, I had a roommate who claimed it to be one of the best games on the original PlayStation. CTR was her favorite and we ended up playing it several times. My roommate was so nice and sweet, which made it even more confusing when she kept beating me mercilessly and saying it was okay that I would never beat her.

I played the game a lot more on my own once I began collecting again and I can say without a doubt that classic CTR is incredible, but the thing I took away the most from it was how much fun some of the tracks were. There were several courses I wished could be in Mario Kart, I liked them so much. Nintendo’s designs always feel so sleek and creative, but something in the Crash selections felt raw and exciting.

So, with Nitro-Fueled out, I eagerly dove back in (after a 42 pg. License Agreement and then a 28 pg. Privacy Policy mood killer) to remember some of my favorites and see them in their new, crisp glory. Here are some of the best Crash Team Racing Nitro-Fueled tracks for new players and old. 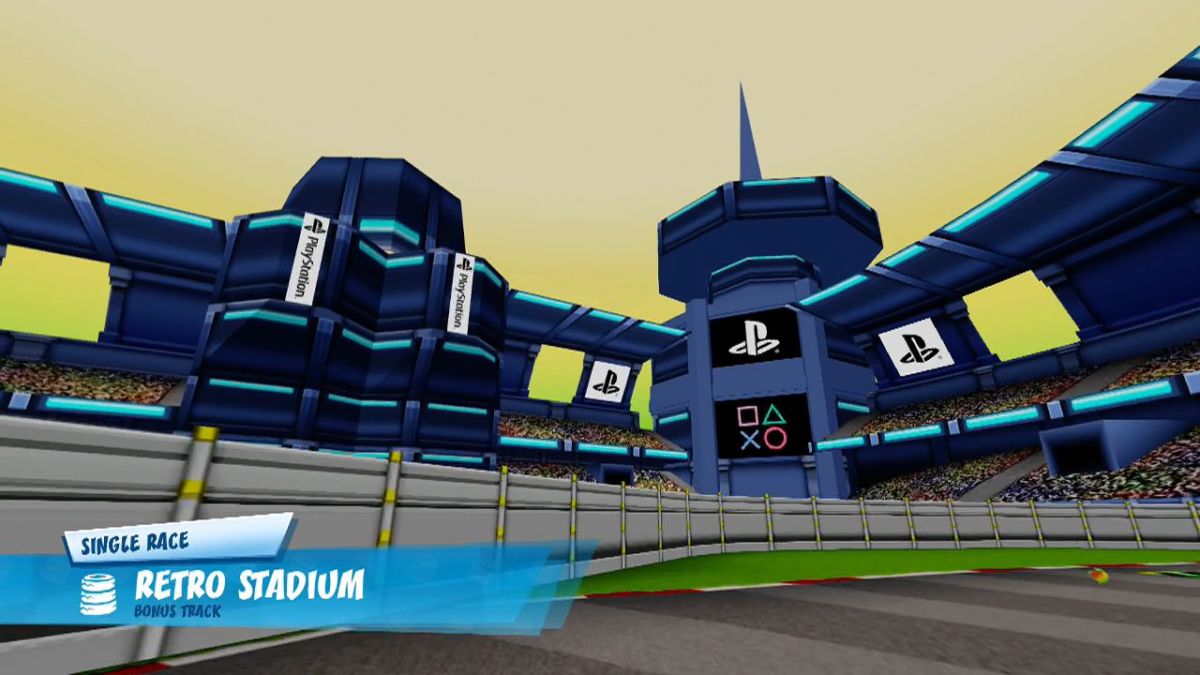 This track will go under the radar for a lot of people, being a retro reskin of Turbo Track and an exclusive to the PS4 release, but I found it quite warm and comforting, reminding me of the original game. It just feels good to drive around and look at the less detailed backgrounds.

It’s a fun course to select for those who don’t know the game well and could be surprised by seeing this clever throwback to the series’ origins. I do rank Retro Stadium low on the list because of those vicious sharp turns. Still, I’m a sucker for seeing those PlayStation logos up all over the track. 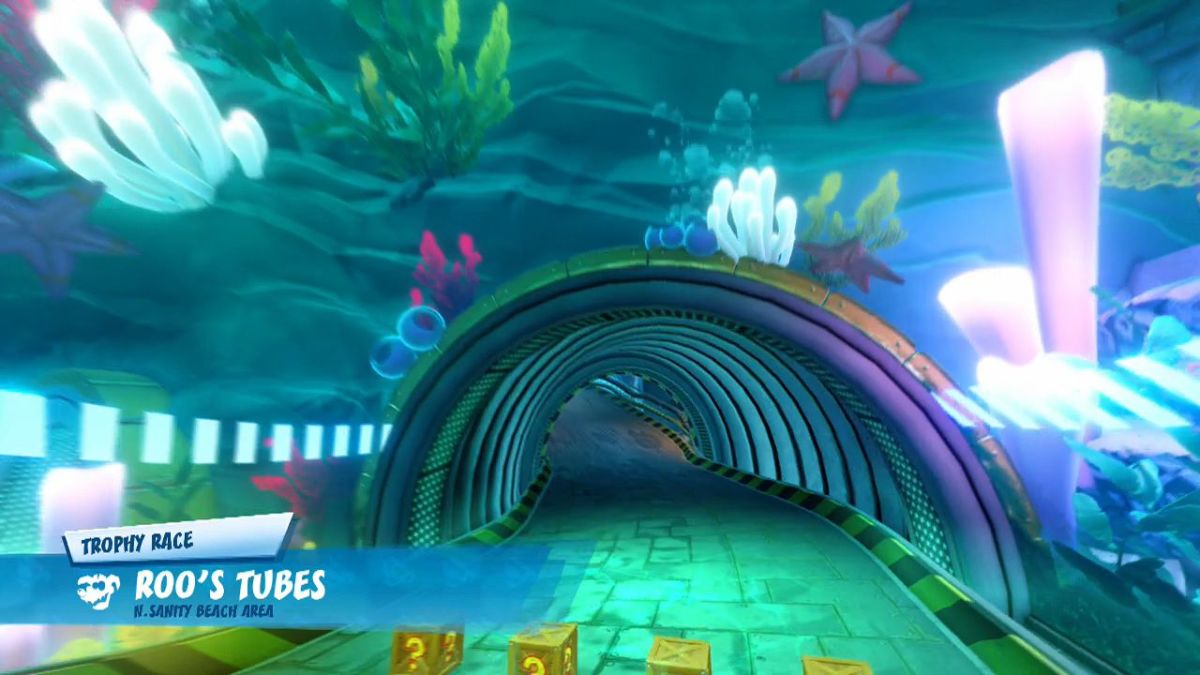 Underwater levels are a pain in most games, but not when we can race through large glass tubes beneath the ocean. Here, contestants can stay dry and still see a ton of ocean life moving around in deep blue sea, which is always a plus in my book. But this is coming from a kid who loved Jaws 3.

Roo’s Tubes also wins for my favorite opening to any course, seeing a pair of sliding glass doors open up to the track. This aquatic theme is helped out with the cool and somber tones that are set opposite to some wildly energetic music. We see that same juxtaposition with the technology of the tubes, pipes, and other equipment alongside the skeleton of a great beast. 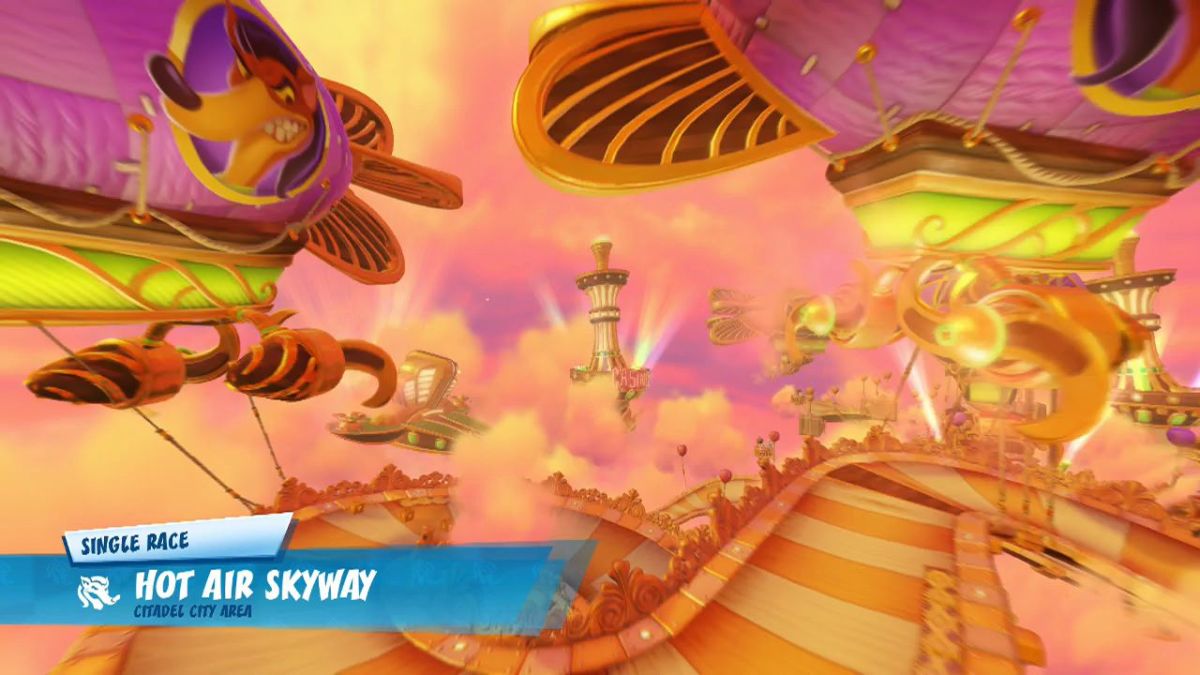 This raised track is a fan favorite for many but I didn’t like it originally. Much like Mario Kart’s Rainbow Road courses, it is beautiful while being challenging and easy to fall off.

The colors are spectacular in some areas for sure, but they blend together in spots, making it harder to notice how close a ledge is or see exactly where a turn starts. Perhaps that thrill of falling help adds to the excitement though, as navigating the Hot Air Skyway successfully is a thrill. The added card theme and gold inlays are eye-catching and show just how money this course is. 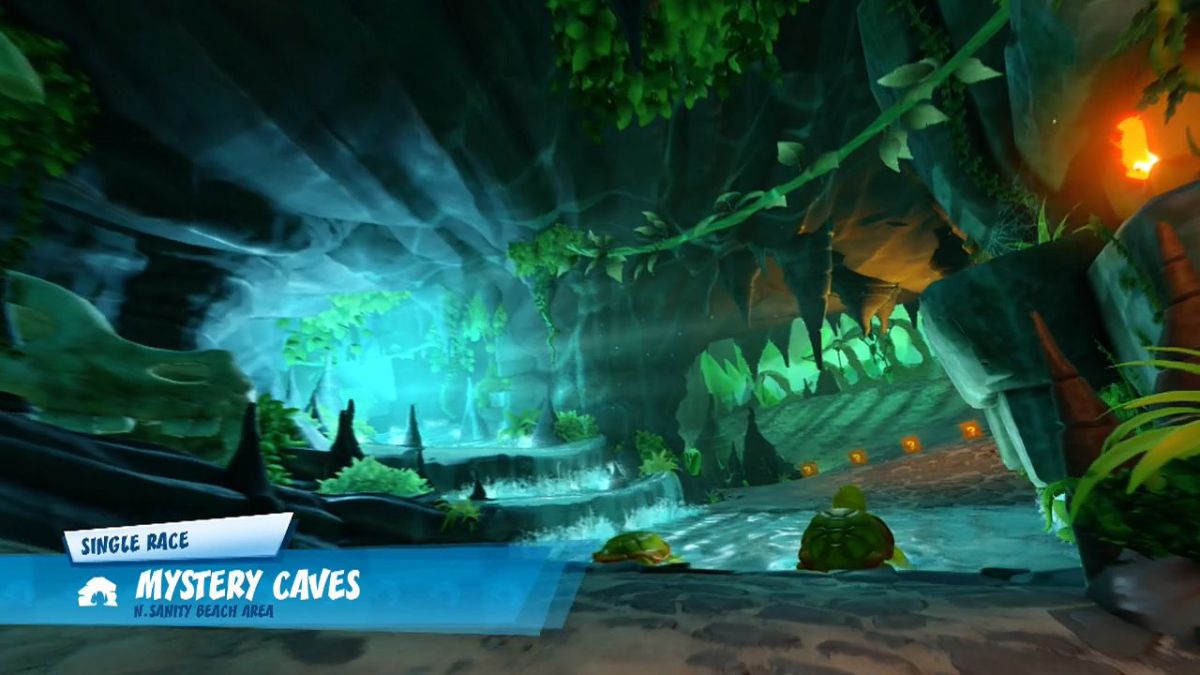 This has such a pirate cave meets Legends of the Hidden Temple scenario going on and it does a great job of mixing those two environments. Minus Hot Air Skyway, this game knows a little something about color contrast and it does it expertly with the cool calm colors of the underground caves into the Aztec looking deathtrap complete with fireballs.

Mystery Caves’ green crystal section is wonderful and should have been longer. The course has a lot of bounce to it, not only in the uneven surfaces to speed over but also the turtles that players jump off the shells of. Cruel but effective.

Tiger Temple boasts a nice stormy setting with lightning in the background to motivate the racers as they cruise through a reject temple from an Indiana Jones movie, complete with flames coming from the columns.

I love the mud track and the visuals that it offers, as well as the darker hues that allow the torchlights to stand out. It’s easy to know where to go but has an excellent shortcut that requires the player to know it’s there and then to damage the opening, which I love. The jungle vibe also makes me think of this as the missing great Donkey Kong stage.

This stage makes the list due to the spectacle and how engaging the backdrops are. There is so much going on in the Dragon Mines that it is easy to get distracted. There is a great bridge section that is dangerous to try to pass on, which isn’t the only reason this course is a bit tough. Not only are there plenty of pillars and beams to run into, but I lost count of how many times I was run over by a mine cart.

Players new to this track may be confused about where to go at first and the shortcuts are very risk versus reward. The music stands out a bit due to the rhythmic beats that get players in the mood for the tight turns and those harmonica-like sounds work with the theme—keeping it lively. 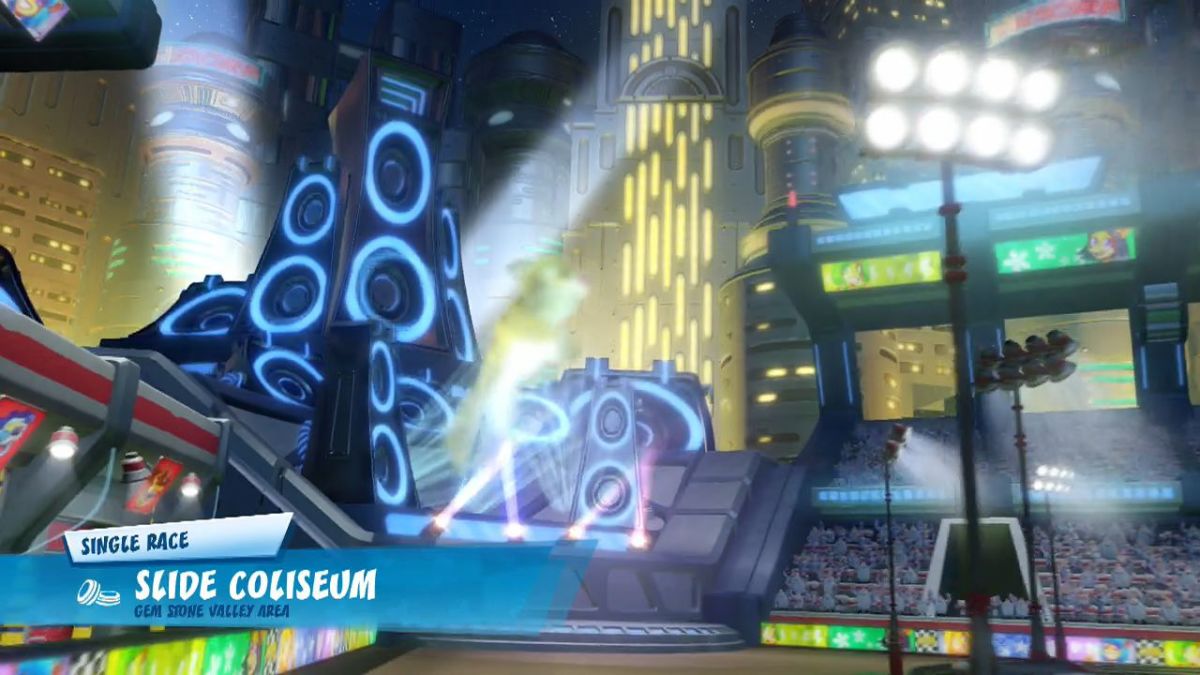 This is an appropriately named stretch of asphalt that reminds me a ton of some early designs from that Nintendo series everyone tries to compete with. That’s a good thing, because the landscape itself is incredibly flat and simple, as racers will be sliding around a long series of turns and fighting each other in close quarters for space.

The AI in CTRNF is dangerous and I felt that most here, constantly getting double-teamed. It is easy to get a boost here at almost any point with a lot of curbs to jump and turns to figure out how to maneuver. This makes for a solid practice track in the time trials too. It has a nice city look with a lot of lights and activity going on in the background while not being too distracting, allowing the player to focus on being a champion. 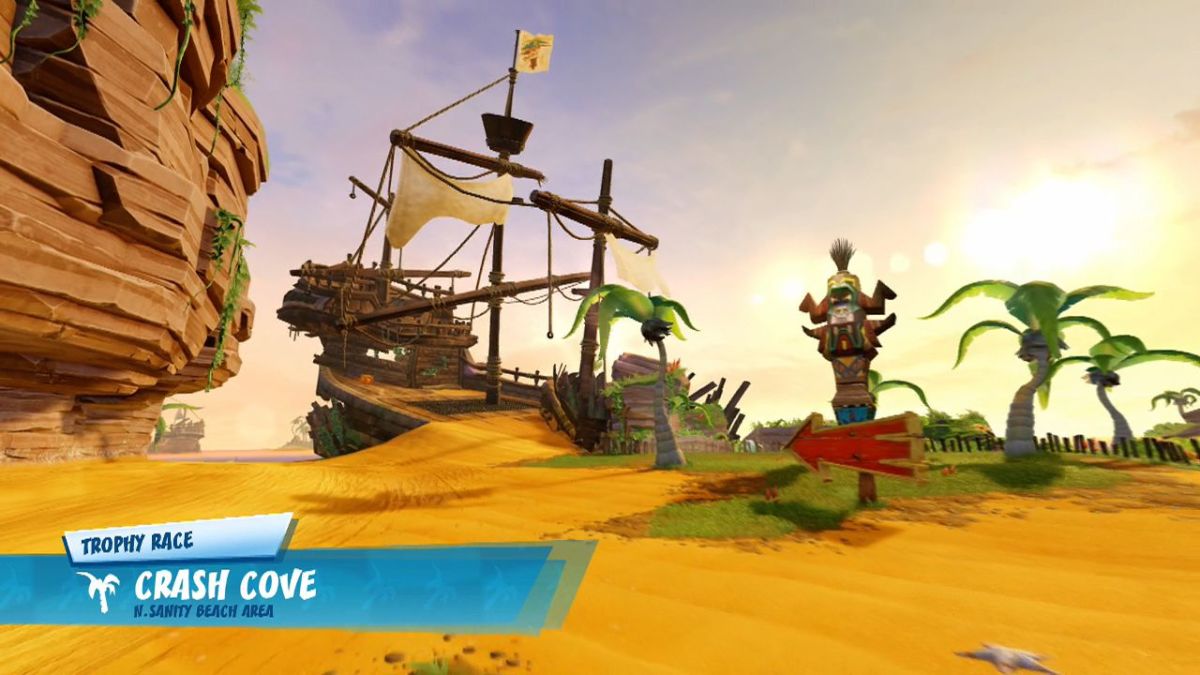 Driving fast on beautiful beaches is a staple for kart racing games. There is something about the sun and water that just brings out the natural splendor that mixes with the smell of gasoline. Oh, and did I mention the pirate ships? Driving up one of them as a ramp is just exciting.

There are also bridges, docks, and rock formations in the middle of the road that keeps each lap interesting. Crash Cove also has my favorite simple shortcut up on the grass. It makes for a solid starter stage for new players but is still a fun ride for veterans. 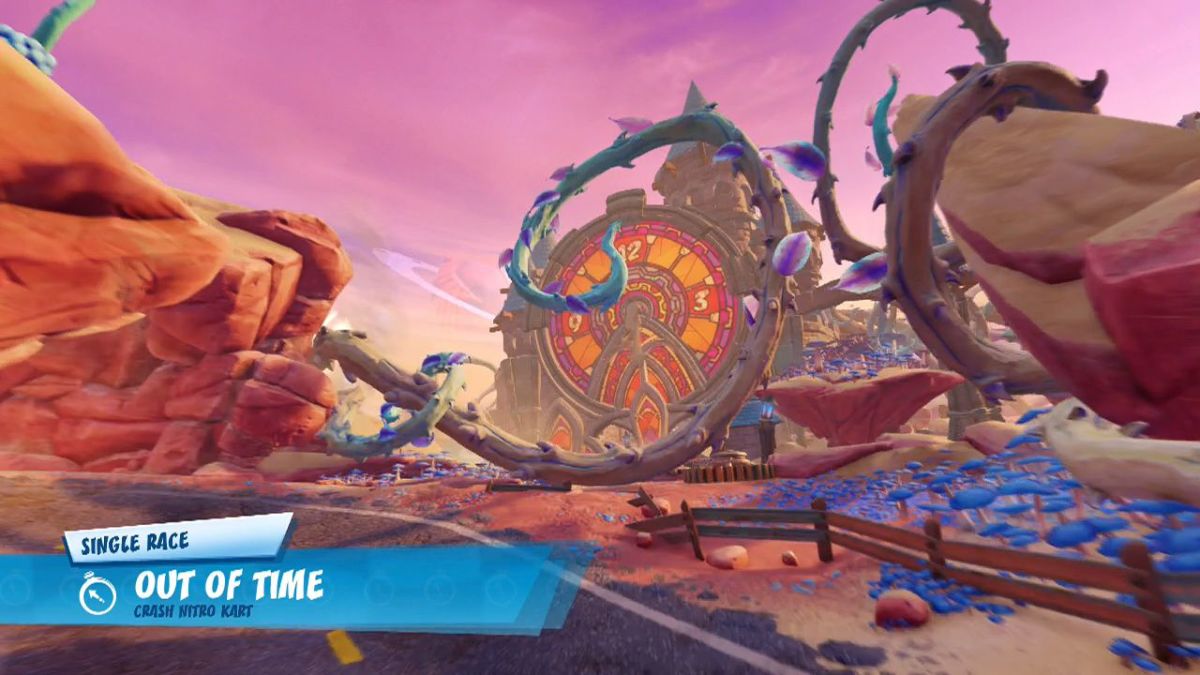 Out of Time is perhaps my favorite course aesthetically because of the color blending and small details in the air. There is so much going on across each path and it is tempting to drive the wrong way in hopes to see more of the intriguing landscape.

Out of Time’s theme is that of time with warped clocks and reminds me of a Salvador Dali painting. The scenery is wacky, inspiring, and a littke bit haunting all at the same time. The windmill is a nice touch with a few ramps that are hard to pass up. I’ve also had some of my best comebacks here, so that may have something to do with why I love it so much. 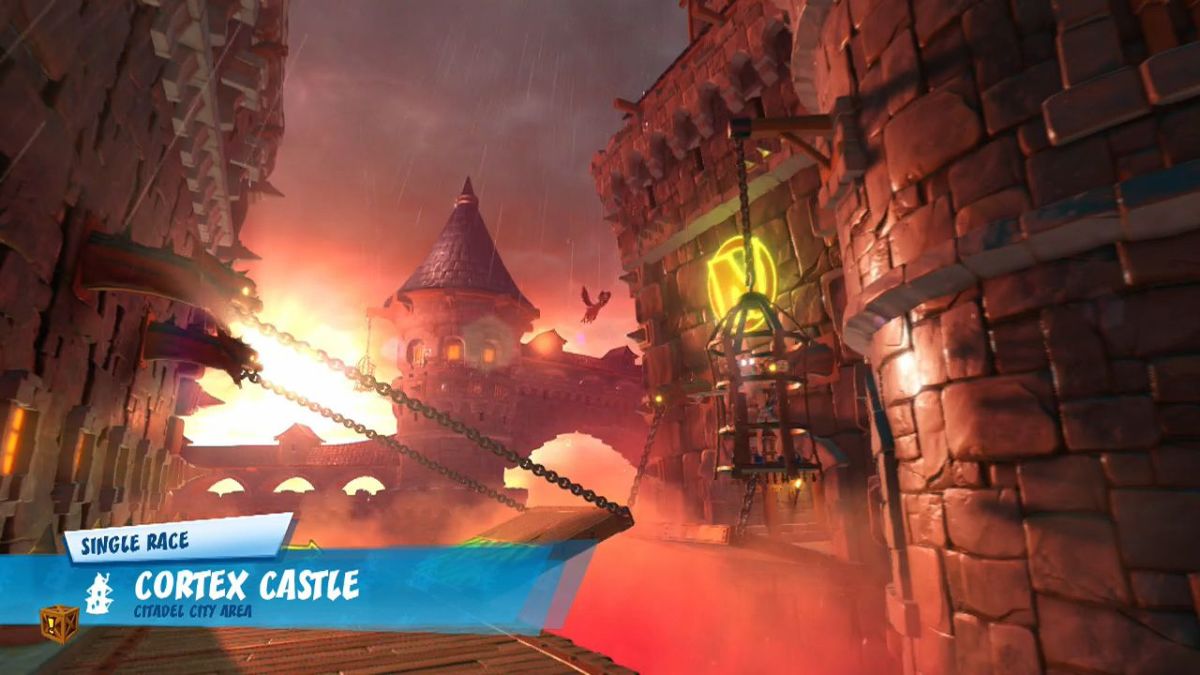 Possibly the most classic of the Nitro Fueled, Neo Cortex is doing a good job at rivaling Bowser at every turn. The place is beautifully designed with shifting color schemes and bright neon for some eccentric flair.

Cortex Castle has some serious character with its large statues and stained glass windows, but my favorite part is the gargoyle. I just hate the spiders. It is a tougher stage with sharp turns that are easy to miss and fall off of, landing the player in last place. There is also one of my favorite long drops off of a ramp here. Once the track is familiar it is easy to enjoy and starts to really feel like home. 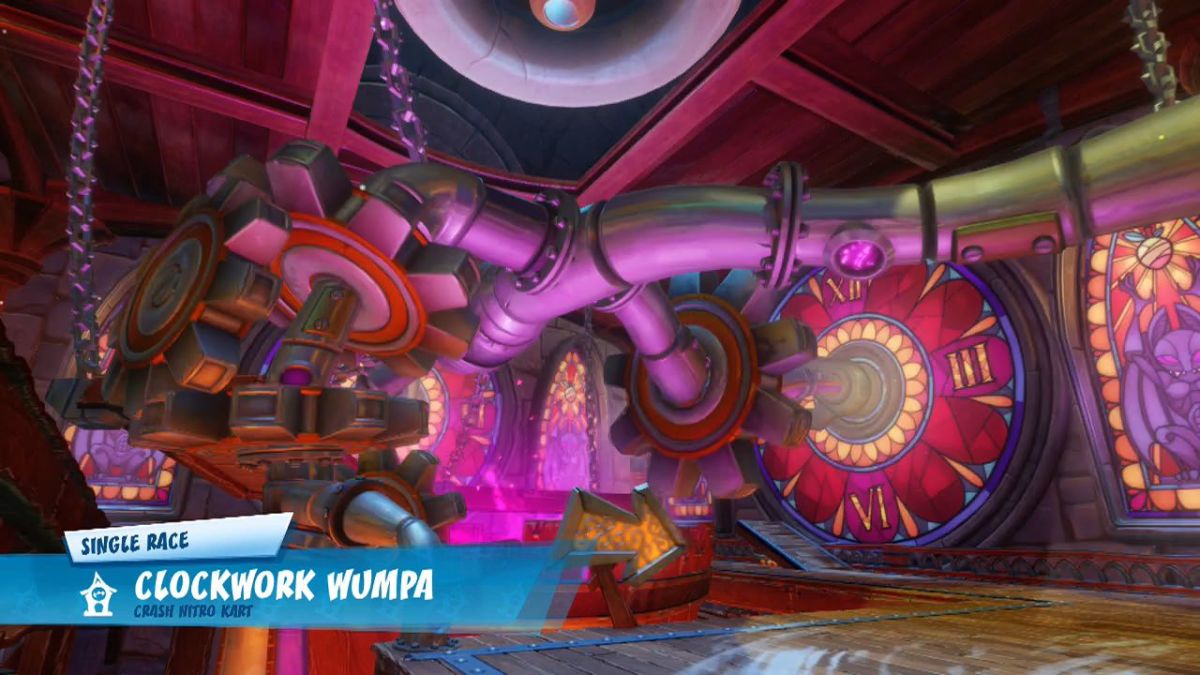 From the large bells at the starting line to the swinging pendulum and giant clock face, this stage nails its theme, even if I have no clue why they store wumpa fruit here.

Clockwork Wumpa has some of my favorite level design, especially with how the shortcuts fit into the structure and getting to ride across the gears to victory. I like this tower because it feels like there are so many levels to it, which does make it a bit confusing initially. It’s a dangerous environment where giant cogs can squash a racer and there are devastating trap doors so that no one gets too comfortable in this stunning monolith.

Papu’s Pyramid is such a gorgeous location for a race. With the sun out, clouds hovering over the mountains in the distance, and a set of refreshing waterfalls to zoom past, the course scores with visual appeal. The lush open scenery at each turn isn’t the only positive though, as the vibrant colors can’t distract too much from how fun Papu’s Pyramid is to fly around and practice tightening up my drifting.

It is a vertical course with numerous ramps and drops into potential peril, which feels versatile for different playstyles. I particularly love and hate the “piranha plants” that swallow a racer hole and have to train myself not to overshoot the turn near the falls. The track is small and can be difficult at first but it well-worth mastering the turns and shortcuts. Another course with energetic music, I was glad to experience it again with such a nice new coat of paint, as it remains one of my go-to choices for a single race.

Crash Team Racing Nitro-Fueled is out now for PS4, Xbox One, and Nintendo Switch. From our review:

While its initially harsh difficulty may ruin your happy memories of the original in a hurry, Crash Team Racing Nitro-Fueled is kart racing nirvana with an abundance of content to dive into that makes it more than just an exercise in nostalgia.