Admit it, you enjoyed WWE this year. 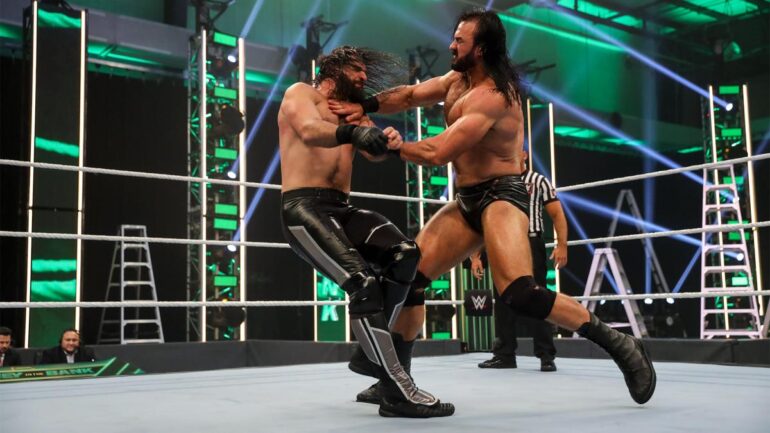 As we near the end of the longest year of our lives (scientifically questionable, mentally very much so), and the sounds of Christmas joy plays on the radio (grinches optional), it presents a wonderful opportunity to look back over the best matches of the last year.

There have been some lows in WWE during this time (WWE Crown Jewel certainly, the Black Wednesday firings), but here we are celebrating just the highs, the ten best WWE matches of 2020.

There will be a separate article for NXT, so don’t panic if your favourite match isn’t here.

2019 featured the resurrection of Bray Wyatt, as he debuted a new iteration of his character, the sinister horror-inspired ‘The Fiend’, quickly grabbing the audience’s interest. Despite WWE erroneously forcing him into the main event scene and almost ruining him completely after the Hell In A Cell debacle, he entered 2020 as the Universal Champion, having retained previously against his rival, Daniel Bryan.

These two competitors have always demonstrated tremendous chemistry with one another, and this match is no different as they crafted a violent fight, the strap used to batter one another. Bryan is often an amazingly resilient babyface and Wyatt was a force of nature, eventually overwhelming Bryan for the victory. A standard setter during a year where nothing was standard.

Lynch entered this match as champion, continuing her successful run with the game changing ‘The Man’ persona. Asuka on the other hand entered with her compatriot Sane, determined to unseat Lynch. Many fans were surprised to see this match open the night but were unsurprised by the quality of the match featuring two of the companies’ best.

Lynch’s babyface fire was regularly troubled by the interference of Sane, allowing Asuka to control the match as she focused her attack on the arm of Lynch. Despite the odds being stacked against her, Lynch’s refusal to be beaten culminated in a sudden victory with a side slam out of nowhere. Though the majority of attention is often given to Shayna Baszler’s post-match vampiric attack, the match itself deserves more eyes on it, as a tremendous representation of the women’s division.

4. Drew McIntyre (c) vs. Seth Rollins – Money in the Bank

This match features one of the undoubted successes of the year, McIntyre having won the Men’s Royal Rumble and vanquishing Brock Lesnar for the WWE Championship at WrestleMania. As the company dealt with the loss of fans worldwide, McIntyre refused to allow his inaugural title reign to be impacted. The previous year’s Royal Rumble winner and WWE Champion Seth Rollins had turned heel after negative audience feedback and transitioned into ‘The Monday Night Messiah’ to challenge McIntyre.

An engrossing and excellent back-and-forth battle put over McIntyre as a strong fighting champion, Rollins only gaining only one counts’ until the latter half of the match, where the nearfalls increased the tension. After McIntyre kicked out of the Curb Stomp, his vicious Glasgow’s Kiss allowed him to set up for a match-ending Claymore Kick. Not only one of the best matches from the empty arena era, but the perfect first major PPV defence from the new champion.

Sometimes, you don’t need a convoluted story, or a bitter hatred to get a classic; all you need is two men battling for a championship that matters to them. Due to the pandemic, WWE made the controversial decision to strip current title holder Sami Zayn of the Intercontinental Championship. One of the few positives was seeing two of the best wrestlers on the planet, Bryan and Styles, face off in the tournament final.

Both men entered with a gameplan, focusing on Styles’ left arm and Bryan’s shoulder, a chess battle full of technical mastery and physicality. Throughout, Styles used Bryan’s momentum against him, eventually reversing the Running Knee into a Styles Clash, and gaining the victory after the Phenomenal Forearm. Arguably the best WWE match of the year.

In the midst of a career resurrection as a vicious heel, Orton made the challenge to McIntyre for the WWE Championship, a challenge the fighting champion gladly accepted for the second biggest event of the year. Unfortunately, that willingness and heated momentum almost backfired on the champion, crashing shoulder-first into the ring post, with the methodical Viper taking advantage and bloodying McIntyre.

The finish had McIntyre avoiding a Punt with a Powerbomb, but his own attempt at the Claymore Kick failed. With Orton determined to hit an RKO, the titleholder reversed into a backside to gain the victory. The clever storytelling and teasing references to both men’s finishers worked well, especially as the fact neither men hit their finisher in the end. This became the first step in a feud that mostly succeeded over the next few months.

Styles’ reign as IC Champion ended after defeat to Jeff Hardy, and as the two continued their feud, Sami Zayn returned as the ‘true’ champion. With all three men certain the title(s) belonged to them, Hardy challenged both to a Triple Threat Ladder match. Kicking off the event, all three men had legitimate chances of winning the title and left it all in the ring for that prestigious reward.

Unsurprisingly, Hardy continued his history of daredevil actions, while Zayn bounced like a mad man and Styles created magic. Between Zayn being backdropped onto the ladder, an Exploder Suplex to Styles onto the ladder, and Hardy being flipped with the ladder out of the ring, the spots are deserving of a live audience. Despite being hit by a Swantom Bomb through a ladder, it was Zayn who stole the victory after handcuffing Hardy’s earlobe to a ladder and Styles to another ladder. A must-see modern Ladder Match.

Roman Reigns returned after five months absence with a new heel persona, quickly gaining back the Universal Championship and revealing Paul Heyman as his manager. Most of the top ten matches of the year are due to the level of quality of in-ring work, but this match was escalated due to the tremendous storytelling on display. To the surprise of many, Jey Uso earned a title opportunity against his cousin, who simultaneously denigrated and supported the former tag team champion.

Although Reigns dominated the majority of the match, Jey put on a convincing performance as he battled back, gaining a close nearfall after a Superkick and Uso Splash combo. However, a sly low blow from Reigns negated Jey’s attempts, and Reigns began decimating his cousin with Spears and beatings. Roman’s demands to be proclaimed ‘Tribal Chief’ by Jey eventually led to an injured Jimmy returning to throw in the towel. Intense and hard hitting, it cemented Reigns as a premier heel in the main event scene.

In 2015, the chemistry of these two women created one of the biggest matches in NXT TakeOver history, and since 2017, had a stop-start friendship/partnership rivalry that incorporated Bayley turning heel. The expectation was for Sasha to turn on the champion and the two to finally battle at WrestleMania, but instead, Bayley preempted and destroyed her former friend. With some heated promos in the build-up, this match had high expectations, and somehow, these two met it.

Full of violence and competitiveness, the two rivals utilised kendo sticks, chairs, tables, fire extinguishers and the cell itself to inflict damage upon one another. With callbacks galore to their history, Sasha vanquished her opponent for her first victory in the Hell In A Cell match. The finish was perfect as Sasha utilised a chair in the Banks Statement, making Bayley tap out to end a 380-day title reign and make Sasha champion. Worth the wait.

After the physically and emotionally draining war at Hell In A Cell, a rematch was booked for SmackDown two weeks later. The importance of this match couldn’t be underestimated, as Sasha had an unfortunate history of losing championships, the longest of five RAW Women’s Championship title reigns’ lasting 34 days. Bayley herself was determined to regain the championship she had elevated over the previous year.

A vindictive Bayley launched Banks into the air early on, with the champion landing hard on the apron and floor, leaving her weakened and hurt for the rest of the match. Like a shark circling prey, Bayley continued the attack, even locking Sasha’s own Banks Statement on her. Displaying grit and determination, the titleholder battled back, finally hitting her Backstabber/Banks Statement combo to make Bayley tap in the middle of the ring. In a year where both women proved highlights of the show, this match perfectly encapsulated the tremendous work both had put in.

Despite the struggles and adverse year that many fans have faced over the last twelve months, there has always been the reliable guarantee that every week, there was wrestling on television. Though the lack of fans has created a surreal air to the events, those wrestlers able to perform were determined to entertain fans around the world. Listed above are ten matches for fans to enjoy as they look back over the year, the best WWE matches of 2020.