Still firing on all cylinders! 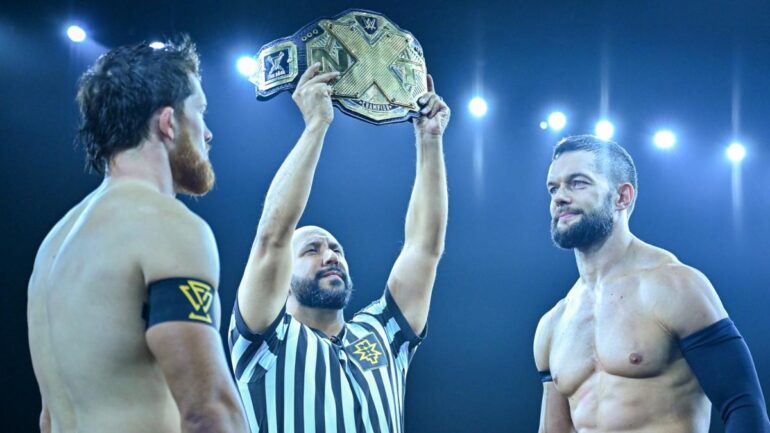 As we near the end of the longest year of our lives (scientifically questionable, mentally very much so), and the sounds of Christmas joy plays on the radio (grinches optionable), it presents a wonderful opportunity to look back over the best matches of the last year.

Over the year, NXT UK suffered particularly badly due to the worldwide pandemic, having several months dedicated to reruns. Despite this, NXT as a whole demonstrated its always reliable reputation for tremendous wrestling throughout the year, detailed below with the best NXT matches of 2020.

Prior to the event, this bout was cited as the most likely candidate for match of the night, as it featured one of NXT UK’s most reliable performers in Bate and the underrated Devlin. Despite the lack of stakes between the two competitors, the match was quickly elevated by the flawless execution throughout. The action gradually built, and the crowd were invested heavily, chanting “fight forever” and “this is awesome” predominantly in celebration of the action.

Bate’s finisher, Tyler Driver ’97, gained a close nearfall and motivated the ‘Big Strong Boi’ to hit the Spiral Tap to finally gain the victory. In appreciation of the excellent match, the audience were joined by Triple H and NXT General Managers William Regal and Johnny Saint in a richly deserved standing ovation.

The Dusty Rhodes Tag Team Classic had previously succeeded with new partnerships, such as inaugural winners Samoa Joe and Finn Balor, so it was unsurprising to see fan favourites Matt Riddle and Pete Dunne partnered together as The BroserWeights. Their first round match had them face former NXT UK Tag Team Champions Webster and Andrews, who were determined to make an impression on U.S. soil.

The contrast between teams, Webster and Andrews predominantly high-flying specialists, and the BroserWeights more hard-hitting, technical based, created exciting chemistry through this underrated highlight from NXT television. The size and strength advantage of the BroserWeights early in the match was combated by the Welsh wizards and allowed the UK-based team to impress a hot crowd.

Even though Riddle and Dunne eventually hit the Bitter End/Knee Strike combo to win, Webster and Andrews had succeeded in showing their own potential in the tag team division. If not for the pandemic, they may have been more successful on the NXT brand.

Ever since the creation of NXT UK, many fans were hopeful of an eventual crossover and a battle of the brands, including a dream match between Imperium and Undisputed Era in a WarGames match. Although it wasn’t in WarGames, the dream match did occur at a WWE Network special, with both brands’ leading champion featuring. The early moments of the match featured an unfortunate injury to Alexander Wolfe, as he scarily went limp after a rogue kick to the face.

Despite that moment, the seven remaining men impressively reworked around the injury and crafted an ingenious match, with the Era removing WALTER with a huge Angle Slam through the announce table. However, the resilience of both Marcel Barthel and Fabian Aichner helped them survive long enough for WALTER to arise from the dead, with a hot tag to the ‘Ring General’. WALTER became an unstoppable force, destroying a dangerous Undisputed Era to the astonishment of the audience, finally Powerbombing Bobby Fish for an emphatic three count.

Even though Finn Balor’s return to NXT was predominantly to help Balor get some mojo back, it also offered an opportunity for some dream matches to help NXT gain more viewers. One of the first main feuds for Balor was to take on the NXT MVP Gargano, who was betrayed by the returning former Universal Champion. Balor utilised a more submission-based style, focusing his attacks on Gargano’s left knee and ribs throughout.

Gargano continued to avoid the Coup De Grace and almost took the victory with his reliable Gargano Escape, but Balor made it to the ropes. Battling onto the outside, Balor viciously dropped Gargano rib and sternum first onto both the table and the guardrail, weaking Gargano enough to hit the Coup De Grace and the 1916 DDT for the victory. Gargano’s resilience and Balor’s ruthlessness combined to create a high impact, hate-infused counter-wrestling clinic that showcased the best of both men.

5. The Undisputed Era (c) vs. The BroserWeights – NXT TakeOver: Portland

After they succeeded in winning the Dusty Rhodes Tag Team Classic, Matt Riddle and Pete Dunne challenged the current tag team champions in Kyle O’Reilly and Bobby Fish. The champions have been renowned for regular show-stealing tag team matches at NXT TakeOver for the last two years, and they utilised their experience to control the vast majority of the match, cutting the ring off to prevent Dunne tagging in his partner.

The makeshift tag team were almost manipulated into an implosion, with an accidental Spear from Riddle nearly costing Dunne the match. However, in a hot closing stretch that had the crowd on the edge of their seats, Riddle and Dunne defied expectations and took the victory with a Bitter End/Go To Sleep combo. With four of the best in-ring wrestlers on the NXT brand featuring, this is an unsurprising highlight of the year.

In previous years, Ciampa had proven himself one of the best heel champions in the business, helping elevate the NXT Championship during an impressive 238-day reign. Unfortunately, the reign ended bitterly as Ciampa was forced to vacate the championship due to a neck injury. During his time away, the title was won by his rival Gargano, and then the leader of the Undisputed Era, Adam Cole. Despite not seemingly being planned for the main title, Cole took the opportunity to develop possibly the greatest NXT Championship title reign ever.

When Ciampa returned, their match was inevitable, and the two combined to create a psychologically engrossing battle revolving around Cole’s exploitation of Ciampa’s surgically repaired neck. When that failed, Cole attempted to cheat through interference by his stable mates, low blows and referee bumps, but Ciampa refused to be defeated. Unfortunately, Ciampa was betrayed by his own sins, as his supposed friend Gargano attacked to cost him the match. NXT TakeOver: Portland is arguably one of the best TakeOver events in history, and this main event deservedly capped off the night.

NXT has been reliably consistent in crafting excellent Ladder Matches, including a six-man classic that featured Adam Cole winning the inaugural North American Championship, and this match is no different. Between Gargano Powerbombing Grimess off and onto a ladder, Reed running against the ladder to Splash Dream, and Priest hitting a Somersault Dive off the ladder, the spots were fantastic. At one point, even Candice LeRae got involved, ending up with Reed wiping her and her husband Gargano out with a Splash. Eventually, it came down to Priest and Gargano battling on the ladder, with Priest gaining his first NXT title reign.

After a slightly disappointing anniversary special, expectations were low for the following TakeOver, due to a seemingly rushed set-up and an unlikely challenger in Kyle O’Reilly. Instead, the entire event surprisingly overachieved, including a main event that blew everyone away. Balor and O’Reilly recreated the sort of violent fights that dominated Ring of Honor main events during the Bryan Danielson era, full of nasty strikes and wrenching submissions.

Although O’Reilly failed to win the championship, the aggressive nature of both men helped demonstrate how underrated O’Reilly truly was as an in-ring competitor. With the amount of physicality and damage on each of their bodies, internal injuries and sacrificed teeth were a testament to their competitiveness. At a time when questions were being asked of NXT as a brand, two of their most reliable competitors demonstrated that the brand is as alive as ever.

During their time on the NXT roster together, Shirai and Candice had previously demonstrated amazing chemistry, stealing the show at NXT TakeOver: Toronto 2019 in an awesome fight and impressing at NXT TakeOver: 31. With Shirai in the midst of a successful title reign as Women’s Champion, their bitter rivalry main evented the NXT special Halloween Havoc, this time the match decided by a wheel that determined their match as a Tables, Ladders and Scares Match.

An errant Moonsault from Shirai had her land leg-first on a steel chair, Candice then attacking the bad leg without reluctance. Despite a desperate suplex to Candice on an open steel chair, both women suffered after a Candice Neckbreaker through some tables. Candice’s willingness to do anything to win eventually backfired, when she was shoved off the top of a ladder through another, allowing Shirai to retain the championship.

On the 2nd April, Ilja Dragunov won a twenty-man battle royal to become the #1 Contender to WALTER’s title. Just short of seven months later, Ilja and WALTER finally met with the championship on the line, in a bout that felt TakeOver worthy (and likely planned to be prior to the pandemic). In the lead-up to the match, Ilja pinned WALTER in a tag team match and seemingly had all the momentum behind him.

For twenty-five minutes, these two intense behemoths battered each other in what can only be described as a fight. Nothing fancy, just two competitors determined to beat one another into defeat, exchanging chops, knees, suplexes, clotheslines, WALTER seemingly intent on chopping Ilja’s head from his shoulders. The stiff brutality on display is agonising to watch, and Dragunov has the heart of a champion battling back through the pain and suffering, portraying WALTER as a devastating monster. Though Ilja’s body gave up from the violence, his will and spirit were still determined, leaving both men looking stronger after the match.

Despite the struggles and adverse year that many fans have faced over the last twelve months, there has always been the reliable guarantee that every week, there was wrestling on television. Though the lack of fans has created a surreal air to the events, those wrestlers able to perform were determined to entertain fans around the world. Listed above are ten matches for fans to enjoy as they look back over the year, the best NXT matches of 2020.