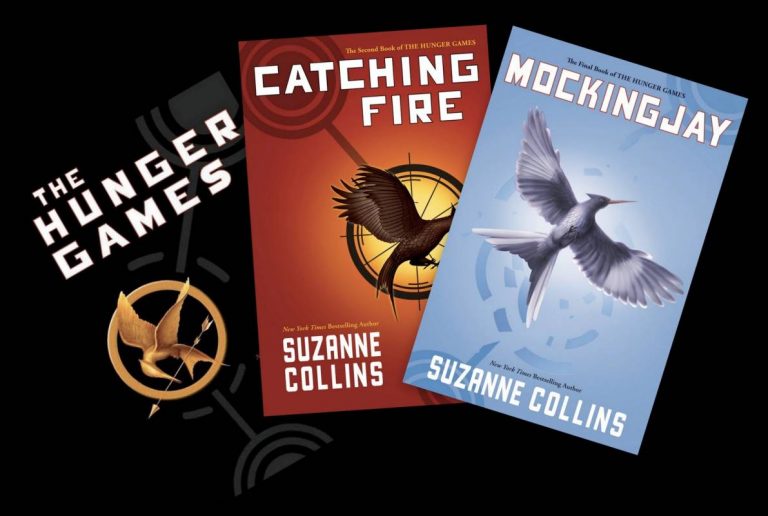 For years dystopian fiction has been popular in novels, but since The Hunger Games, it seems to have hit the mainstream, becoming the ‘it’ genre of books. So if you’re a lover of this genre and lust after more dystopian novels, this list of past and present (in no particular order) should spice up your reading life.

First on the list is the most obvious and popular choice. The Hunger Games, for those who haven’t read it, is a tale of rebellion against an oppressing ‘Panem’; the Capitol -ran by the sly President Snow- runs the 12 districts where people live. Each year, a boy and girl are reaped from each district to fight till death against one another in an arena, that is, until our protagonist, Katniss Everdeen, comes and decides to shake things up a little. The sequels, Catching Fire and Mockingjay are just as thrilling, if not more so, and all three books are beautifully  set along romance, heartbreak and tears.

Veronica Roth’s Divergent is another popular choice in the dystopian fiction section. In this world, at the age of 16, you make a choice of which faction you enter, determined by personality traits, which aims to remove the threat of anyone exercising independent thoughts. It follows Tris, who enters the Dauntless factions -people who are fearless- and abandons her family. The atmosphere in this peaceful coexistence of factions soon changes though, with an upcoming war brewing between them. The saying ‘faction before blood’ forced Tris to make a choice, her faction or her family and what she believes is right? Again, this is a trilogy, with Insurgent and Allegiant following.

If plot twists are your thing, then you will love The Maze Runner by James Dashner. It never failed to surprise me. It begins with a boy named Thomas arriving into what looks like a large field, surrounded by walls entrapping them in the middle of a large, seemingly inescapable maze. Many other boys live there too, and just like Thomas, cannot remember their lives before. Not long after Thomas, a girl arrives, disrupting the whole life of the group. They must escape the maze and pass the things that live inside of it. The end is a massive plot twist that carries on into the second and third books, The Scorch Trials and The Death Cure.

Now, Delirium by Lauren Oliver is one of my favourites. Love -amor delirium nervosa as they call it- is seen as a deadly disease, so deadly, that when you come of age, they cut out the part of your brain that helps you to love. You’re then set up with a partner for life and dictated how many children to have; leading a strict, controlled life. Lena Holoway falls in love with an invalid -somebody uncured- not long before she is meant to be cured herself, and begins to doubt the society she lives in. It’s followed by  Pandemonium and Requiem, both equally as thrilling and heart-wrenching as the first.

I’m not too sure this counts as dystopian, it’s more science fiction, however it falls under the terms of the meaning ‘dystopian’, being both set in ‘a future considered undesirable or frightening’ and characterised by an ‘environmental disaster’. Glow by Amy Kathleen Ryan is another book I enjoy greatly. The two protagonists, Kieran and Waverly are two teenagers born aboard a space ship, one of two, that are on a journey to ‘New Earth’ after the death of our own. After receiving a disturbing message from the twin ship, an invasion not long follows, leaving Kieran and Waverly separated. Its part of the ongoing Sky Chasers series, so knock your socks off, guys.

Matched by Ally Condie is almost like Delirium, yet completely different at the same time. Once again you are ‘matched’ to a partner, than your whole life dictated. It follows Cassia Reyes, who is matched to her best friend Xander, however another boy, Ky Markham, an outcast,  briefly shows up, sparking interest in Cassia to find out if this society is as honest as it seems. It’s a tale of freedom, romance and rebellion: everything you love in a fictional story.

In a world full of operated beauties, your natural face -and personality- is considered ‘ugly’ until you come of age to have the operation that not only changes your looks to beautiful, but your mind to become more placid and passing of the things going on around you. However, there are the rebellious ‘uglies’ who refused the treatment and hide away, and our protagonist finds them, going undercover to spy on them for government, but its not long before she begins to see beauty in them and understand their cause, but not before she brings destruction and regret upon herself.

Now, this is the father of dystopian novels, a classic, 1984 by George Orwell, published in 1949. The omnipresent ‘Big Brother’ watches societies every move, persecuting individual thoughts and actions as crimes. Winston Smith, the protagonist, secretly despises and dreams of rebellion against this society, despite working for them in the Ministry of Truth and outwardly supporting the party and Big Brother. If you are a lover of classics, or even if you’re not, you should give this a read!

The Road by Cormac McCarthy was on my college A-level reading list for English Lit and is a fairly simple and quick read. A young boy and his father travel south, which seems to be a symbol of hope and a new beginning for them in a world that seems desolate of hope and full of savages trying to survive. They try their hardest to be good people along the way, but it proves difficult, and they cross paths with many challenges along the way.

Finally, Pines by Blake Crouch. After all the excitement of the TV show based on this trilogy of books ‘Wayward Pines‘, I’m sure this is to rise in popularity again. Ethan Burke, a federal agent, arrives in the small town of Wayward Pines, Idaho set on locating two missing agents. However, the town and mystery surrounding it soon trap him, both mentally and literally. There is an electric fence surrounding the town, is that to keep the people in? Or even more eerily, to keep something out?

Hope you enjoy these books as much as I did!