What you should know. 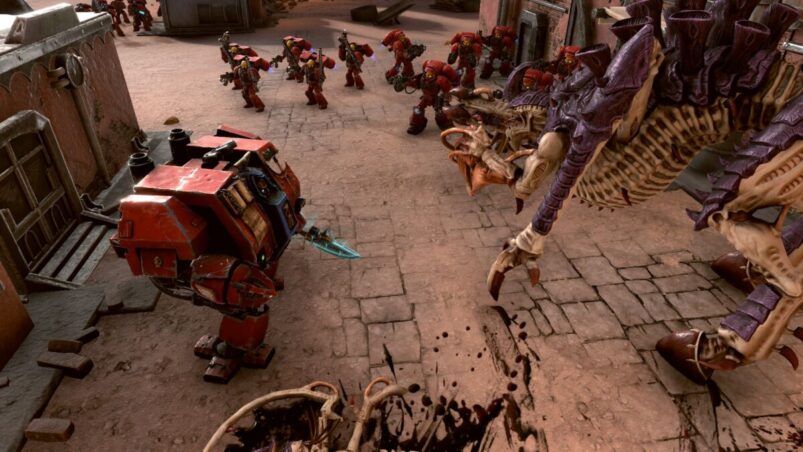 One of Warhammer’s greatest strengths is its excellent faction diversity, both in terms of visuals and combat behavior. Warhammer 40,000: Battlesector doesn’t go overboard with the franchise’s trademark over-the-top craziness and asymmetry and focuses the action on two distinct factions. To prepare players for the battles ahead, we compiled a primer for prospective commanders to better understand their chosen army’s features.

Here are the two main factions in Warhammer 40,000: Battlesector:

And here’s everything you need to know about factions in Battlesector. While the Sisters of Battle do appear in campaigns, they play a supporting role on the battlefield and will not be discussed here.

Humanity’s best (maybe not necessarily the brightest), the Blood Angels Space Marine chapter are the protagonist point-of-view faction throughout Battlesector’s campaign. On the battlefield, they are the ultimate jack-of-all trades faction. They prefer to win with quality and overwhelming force in decisive action rather than complicated combined arms battle plans or maneuvers.

The Space Marine troops can be characterized as having tactical flexibility for all their units in that each unit typically has a defined role, but also just enough options to fill secondary roles where needed. This means that most Space Marine units can target any unit, big or small, armored or unprotected and still do enough damage to leave a mark. The Blood Angels certainly do have specialist units for taking on particularly dangerous opponents, but they are less of a staple playstyle and take more of a support role.

Another key element to the Blood Angels’ balanced approach to combat is the role their Heroes play. While the faction has the most number of Heroes of the two main factions, the majority of them are relatively fragile and have abilities that are best used in a support role. It may be tempting to send in a Hero, guns blazing and gloriously swinging their chainsword left and right, but their damage potential compared to the dedicated workhorse units is quite low and the impact of their buffing abilities incentivizes careful play with them.

The Tyranids are almost a complete opposite reflection of the Blood Angels and are the primary antagonist faction throughout the campaign. Where Space Marines are flexible on a per-unit basis, Tyranids are the combined arms faction, finding flexibility not in any single unit, but in the overall force composition and generally can be considered as formation fighting blitzers. However, this doesn’t mean they’re a fragile or weak faction and on the contrary are highly aggressive and dangerous given the right circumstances, preferring to win with numbers and quickly closing distance to cut up their foes in close quarters.

The Tyranids have strict specialist unit roles in their current roster with only a handful of units having enough flexibility equivalent to their Space Marine counterparts. A typical Tyranid tactical approach is to have enough low value expendable units acting as living shields to soak up damage, while the big single-entity monsters and the more capable Warrior units deal damage and win the battle. In addition, aside from a select few units, Tyranids have on average less armor than Space Marines, meaning that they have to do their best to limit incoming fire and make decisive moves not with single units but with their entire force.

Though only having three primary Hero units in the current roster, they’re arguably the linchpin of any Tyranid fighting force due to their own combat power and multitude of impactful support abilities. Tyranid Hero units can certainly perform glorious and successful Rambo-esque rampages given the right circumstances, but that generally puts them in exposed positions and such actions would go against the Tyranid doctrine of considering their entire combined force as a single unit. In a way, Tyranid Heroes are the few highly valuable units that are closest to any one of the Space Marine units and have to be used sparingly for the decisive moment.

There’s plenty of potential for theorycrafting and strategizing in Battlesector with the two factions’ rosters. The challenge for players now is to compose armies that best play into their strengths and counter the opponents moves and actions efficiently.