10 Underrated Comics of June 2022 You Should Read 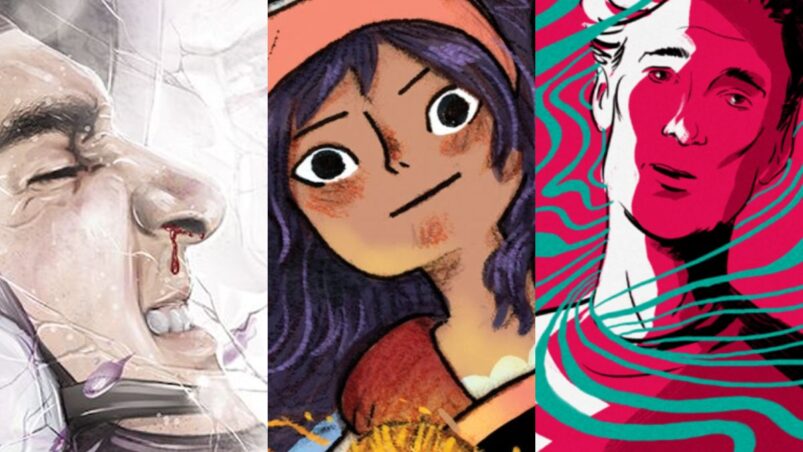 Another month, another chance to narrow down which of the hundreds of new comic releases to spend your hard-earned money on this time. June is one of the rare months where we saw five New Comic Book Day Wednesdays. In essence, this means one extra week to figure out what comics, manga, and graphic novels look most appealing.

Once again, let me acknowledge the term “underrated” is “overrated,” yet completely applicable in situations where we’re talking about choosing a few comics to read, battling for attention against hundreds of other worthy titles. And these lists are written with a bias (mine) but curated to include genres and age ranges across the board. Without further ado, here are ten underrated comics published in June you should read.

Young Nana can’t wait to attend an investigative journalism workshop with her best friend. Unfortunately, Nana’s stories of elaborate excuses concern her parents and teachers. When her mother elects to send her supposedly fibbing daughter to her grandmother in Ghana for the summer by herself, Nana’s personal troubles escalate when she meets the trickster spider of folklore, Ananse.

Middle grade graphic novels are not to be overlooked in the pantheon of single comic issues and mature standalone graphic novels. Although the typed, cramped lettering style isn’t my favourite, the culturally-rich narrative and colorful artwork bring Fibbed to life for a wide audience.

Spirited street-urchin orphan Suri adores monsters, so she studies their background and charges a fee to regale entertaining stories to the youth about the creatures. When the young girl who dreams of becoming a monster tamer suddenly comes to possess a magical golden twine, she must flee her traveling merchant camp. Suri embarks on a quest to find the monsters she loves and run away from her cat-like shape-shifting pursuers who want the twine back.

A lovely introduction to a larger tale with the sensibilities of an animated film, The Golden Twine lays the groundwork for a magical all-ages adventure.

A feel-good tale containing multifaceted elements of melodrama, humour, and a talking skeleton, you’re missing out on a fantasy story subverting all the tropes in Quests Aside from Vault Comics.

Issue #2 of this highly underrated comic was released in June, progressing the energetic tale of legendary adventurer turned tavern owner Barrow and his companions. Here, Barrow contemplates why he gave up his life of sword-fighting and exploits as he combats the potential shutdown of his popular pub Quests Aside. Once friends, the King wants to eliminate Barrow’s tavern for monetary gain.

Quests Aside #2 feels akin to spending the day inside a real tavern, where jaunty songs float through the air and an untethered narrative voice seems to keep magically interjecting from somewhere above your head. Thoughtful passion permeates this comic, from the witty dialogue to the fantastical animated illustrations. Also, read the comic if not merely to bask in the hilarity that ensues from a swearing, selfish skeleton named Ray.

Skybound’s first issue of its Afterschool teen anthology series debuts a chilling standalone story nearly on par with the body horror in a David Cronenberg film. And if you missed this June installment, anthologies fortunately allow self-contained tales you can go back and read at any time.

“Spineless” follows Nora, a high school student riddled with crippling anxiety and a profound lack of confidence. When she adopts emotional support dog Janie, her hands grow steady and her anxiety seems to recede. But a horrifying secret about her loving pet companion puts Nora at odds with her new best friend.

With good horror stories, it’s best to jump in blind and immerse yourself in the terror and shocks. Afterschool #1 will send shivers up your spine with its grotesque visuals and empathetic protagonist.

Sci-fi comic author Zack Kaplan is a writing machine, pushing out a multitude of collaborative new and ongoing comic series simultaneously. Mindset #1 from Vault Comics received rave advanced reviews all June before its publication, yet the second issue of the futuristic sci-fi miniseries Metal Society seems to have flown under the radar.

The Top Cow comic shows how robots have replaced humans, yet the humans fight back for equality by proving human labor is an efficient resource. Written by Kaplan and illustrated by an equally talented creative team, add Metal Society to your pull list.

There’s a burgeoning market and essential space in the current comics industry for stories addressing mental health and invisible illnesses. Ripple Effects #1 from Fanbase Press kickstarts a series intertwining diabetes with superheroism in a slow-burn, grounded fashion that works to its advantage.

In this opening issue, aspiring writer George Gibson searches for inspiration and a place in the world. Yet an unusual condition plagues George on his quest to pen a seminal work of literature: He has Type 1 acute diabetes that manifested when he gained the superpower of invincibility. Diabetes impacts George’s daily life as he grapples with hiding both his super abilities and his invisible illness.

Though we meet a character invulnerable to physical injury, Ripple Effects presents an emotionally vulnerable character. George’s disability does not take a backseat in this heartfelt comic. Read an uplifting tale where acceptance, learning, and loving support hold immeasurable value for someone navigating life with an unseen disease.

As a child, Howard’s father bestowed him with a magical sword before their enemies slaughtered his ultra-religious dad. Many years later, Howard roams as an aimless immortal. But the lonely old man finds himself called back to his monster-hunting roots when a young woman named Lupe asks for his help fending against a supernatural creature.

Exposition, character introductions, and narrative set-up all merge to build this excellent opening issue. Crook’s gorgeous watercolor and acrylic artistry enliven the atmosphere of this dim universe. This first installment is an effective opening to the transcendent story promised to unfold in subsequent issues of The Lonesome Hunters.

Justice Warriors #1 from AHOY Comics hits close to home with a wacky dystopian satire about mutant cops bending morality to defend citizens in the name of “justice.”

An affluent 1% of normies live a pleasant life inside Bubble City, where crime, injustice, and poverty cease to exist. Outside the wall of this metropolis, the inhabitants of the Uninhabited Zone full of mutants and violence are left to their own devices in a wasteland. It’s up to Bubble City PD cops Swamp Cop and his rookie partner, who has a poop emoji head, to combat crime and seek vengeful justice on their enemies.

To describe this comic in words cannot do it real justice. Matt Bors and Ben Clarkson’s unique brand of humour and art style proves quite unlike any other comic on the shelf. Reading Justice Warriors is an experience, pushing the boundaries of the medium with excellent results.

AfterShock Comics released a bevy of outstanding first issues in June, including Where Astronauts Go to Die #1 and A Calculated Man #1. However, the topical sci-fi epic Astronaut Down #1 following an astronaut attempting to save the world from a mysterious plague should make everyone’s comic pull list.

In the future, humanity is on the brink of extinction from a now-unstoppable crisis after deniers ignored warning signs. Bold and compassionate, astronaut Douglas Spitzer vies for a spot on a paradimensional space mission. Douglas and the other astronauts will try to touch down on an alternate reality to solve their reality’s current calamity, but they’ll have to knowingly sacrifice themselves to succeed.

Horror and sci-fi collide in one of the best subgenres during this thrilling opening issue.

That Texas Blood became one of my favourite comics overnight when I binge-read the entire series in one sitting. After a substantial hiatus from a Christmas Special issue, the pulpy murder mystery thriller series from Image Comics returned in June with a pitch-perfect new story arc.

A masked killer murders a young woman in Ambrose County, Texas one January night during the Bad Blizzard of ‘92. West Texas cop Joe Bob and the rest of the Ambrose County PD contend with a serial killer on the loose after they discover the gruesome remains of the city’s legal star Patti Doyle.

That Texas Blood #14 offers an excellent jumping-on point for newcomers to the series. On the other hand, previous knowledge about the horrors Joe Bob has undergone in the previous issues amplifies the stakes and terror elicited. Arguably the scariest issue yet, slasher fans will be thrilled and audiences will shiver from terror after reading this underrated comic.