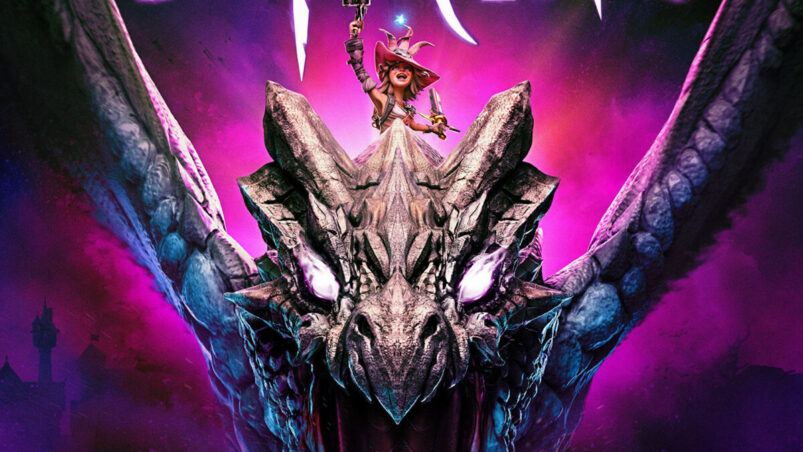 This tongue-in-cheek fantasy game is based off of the Borderlands 2 expansion Tiny Tina’s Assault On Dragon Keep. In the Borderlands 2 story we visit the Crimson Raiders members Brick, Mordecai, and other characters all playing a game of Bunkers & Badasses (the Borderlands equivalent to Dungeons & Dragons) and roleplaying their respective heroes in a ridiculous fantasy story about saving a princess from a dragon, and about Tiny Tina’s struggle to accept Roland’s death. In Wonderlands, this is clearly a much deeper experience than a story with RPG window dressing.

Mentioned briefly by Ashly Burch during the Summer Game Fest kickoff event, Tiny Tina is “…kind of guiding the narrative and changing it on a dime if she wants.” Which implies that things could happen at random during encounters in the world. Whether Tina serves as a “Voice of God” type of role who can suddenly change the rules on the fly or there are mechanics tied to randomized encounters has not been fully disclosed.

The ability to change things on the fly could also indirectly mean that there might be a series of different narratives that aren’t the same during each playthrough, despite mentions of a post-game activity in press release material.

In previous Borderlands games, we were thrust into the shoes of one of several pre-existing characters, the Vault Hunters. While they had their own classes like Krieg the Psycho or Amara the Siren, we never had a large amount of choice as to how our character looked, sounded, or behaved. Wonderlands seeks to change that by having some form of deeper character customization.

Considering the Dungeons and Dragons influences and an already existing rules template in the form of a real version of Bunkers and Badasses coming soon from Gearbox Software offshoot, Nerdvana Games, it’s likely we could see a blank slate type of player character. Whether that means we play the classic “Silent Protagonist” who doesn’t speak much or we’ll have voice options during creation remains to be seen.

3. Spellcasting Instead of Grenades

In the premiere trailer for Wonderlands we see a character face off against a dragon with what looks like a typical Borderlands gun, but partway through he casts a spell of some kind. Being a fantasy game, magic is bound to show up somewhere. In Wonderlands, grenades have been replaced by spells and magical items. According to game director Matt Cox, players will be able to equip spells not only as dedicated attacks, but also included with class abilities as well.

“We actually like to think of our spells more as mini-skills because of their power and their variety of behaviours.” Cox stated in an interview. In Borderlands 3, guns came with class-specific anointments that would augment abilities or trigger effects based on a player’s used powers. Wonderlands’ spells will probably carry similar effects where they perform both on their own and have bonuses depending on how a player’s class is kitted out.

4. Melee-only Classes Are A Thing

Traditionally, most Borderlands games have been about the loot, though some brave streamers have attempted “melee-only challenges” in previous entries. However, Wonderlands hints that it’s not just a ridiculous challenge that hampers your experiences anymore, but a major part of how you play.

In an interview with IGN, Gearbox creative director Matt Cox mentions loot coming “…in the form of guns, melee weapons, and spells.” An important distinction for sure, the inclusion of melee-specific weaponry means that not only will melee builds not only be a niche, they will actually be useful in many situations.

Borderlands’ weapon variety has always been pretty top notch. From pistols that shoot plasma balls to a rocket launcher that fires a nuclear warhead, it’s probably dropped by a boss or in some chest in a Borderlands game somewhere. But in a fantasy game, there’s always a classic weapon that doesn’t require gunpowder (or magic) to be used – a bow and arrow.

Borderlands has never featured a bow and arrow, but sort of had a crossbow. Wonderlands is going to fix that. After the trailer’s premiere, Gearbox CEO and co-founder Randy Pitchford responded with a fan’s request to add bows and crossbows to Wonderlands with an extremely blunt “Ok.” Whether this means plans for bows have always been in place or Randy just wants fans to be happy, that’s unknown.

News is still pretty scant on this new game from Gearbox, but fans can anticipate discussions on the likely channels like the Gearbox Twitch streams for the Borderlands Show and more interviews at upcoming shows hopefully soon. More information on Wonderlands is bound to be divulged in the coming months leading up to the game’s release on PC, PS4, PS5, Xbox One, and Xbox Series X | S in early 2022.

READ NEXT: Will We Ever See A New SOCOM Game?