Ti West’s X and the Art of Subversion

Can you handle all the seasons of your life? 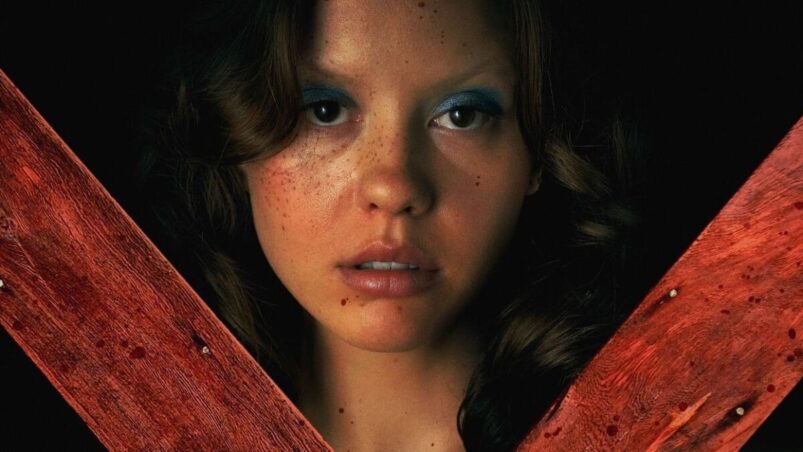 When it comes to horror movies, the best auteurs are the ones who know how to subvert expectations, so that there’s greater pay-off later down the road. Compared to the mindless killing in the Halloween and Friday the 13th franchises, we’ve come to see that allowing us to care about these characters actually bring more stakes to the film, and more investment from the viewers. Ti West’s X succeeds as a slasher flick because the film has both these qualities.

The film begins with the gang of 6 on their way to a farmhouse to shoot an adult film – a life-changing one according to Wayne (Martin Henderson). This is because he’s got film student RJ (Owen Campbell) on board, who’s going to shoot the entire film in an indie, arthouse style – elevated porn in other words. RJ’s brought along his girlfriend Lorraine (Jenna Ortega) to help him with the sound equipment, but it’s clear she objects to what he’s doing. However, the rest remain unfazed by her judgment. For them, sex is their job and their way of life. They also enjoy what they do, for varying reasons. Maxine’s (Mia Goth) in it for the fame, Wayne’s in it for the money, Bobby-Lynne (Brittany Snow) is all about the pleasure, and Jackson (Kid Cudi) looks at his new career as some form of respite from his former life in the Vietnam War.

As Randy explained in the first Scream film, there are certain rules to surviving a horror film: don’t have sex, don’t drink or do drugs, and don’t say “I’ll be right back”, since that’d guarantee that you most likely won’t. Most of these rules function on certain moralistic beliefs – sex, drugs and alcohol are bad for you, so these individuals reap a certain karmic punishment for imbibing. The difference in X is that the killings are driven by envy – the killers look at these youthful people and feel jealous of all the things they still get to have and experience.

Sex is not painted as something seedy or evil, but something yearned for. Pearl (also played by Mia Goth in a fantastic dual performance), one of the killers, feels driven to such acts because she feels that she’s unable to inspire such lustful feelings in others anymore. Her first murder of the film is RJ, because he spurns her advances and she feels rejected. This kill is paradoxically expected and unexpected. If we remember the rules, you have sex, you get killed. But RJ was probably the only one who didn’t have sex, and he’s the first to die. However, we also knew this was coming because of the Psycho-esque shower scene we get with RJ prior to his murder. As for her husband Howard (Stephen Ure), his first kill in the film is Jackson, and this comes mere moments after he sees his phallic member. The kill is rooted in jealousy and a certain lament for his lost manhood, since he is unable to pleasure his wife anymore because of his ailing body.

This envy glosses over everything, with the killers so filled with resentment that they can’t even acknowledge the kindness of these young people. Despite not knowing Howard, Jackson immediately heads out to help him find his wife in the dead of the night, even diving into the river to rescue him when he thinks he might have drowned. The same goes for Bobby-Lynne, who catches sight of a naked Pearl standing too close to the edge of the river, and goes quickly to cover her with a blanket and lead her away from the river. Instead, these acts of kindness are reciprocated with violence, with Pearl shoving Bobby-Lynne into the gator-invested river, and Howard blasting Jackson with his shotgun.

The gator attack is ironically shocking, because even though we know that there are gators in the water, an earlier shot in the movie build our expectations in an inverse way. When the gang first arrive at the farmhouse, Maxine takes a swim in the river while Bobby-Lynne and Jackson are filming their love scene. As she swims back to shore, we get an aerial shot of a gator tracking her, getting closer and closer. There’s so much tension here, since we keep anticipating the gator eventually catching up to her, building up to a surprising early kill. But this doesn’t happen. Therefore, because of the slow build-up of tension from before, we don’t expect the gator to attack immediately when Bobby-Lynne hits the water, and so we’re taken aback when that’s precisely what happens.

If you’re keeping count, you’ll realise that only Lorraine and Maxine remain; Wayne was killed too, but it was so insignificant we don’t really need to talk about it. In the beginning, Lorraine has been set up as the final girl, in our minds at least. She doesn’t approve of this entire enterprise, she seems like a good Christian girl. So we’re all caught off guard when she requests to be in the film as well. The film isn’t trying to portray Lorraine as some type of hypocrite, the point here is that the desire for sex is inherent to most of us, and some are hiding these desires under certain masks. It is definitely significant that Lorraine feels like she needs to remove her crucifix to be able to perform in front of the camera, and the fact that her underwear has the word “Sunday” on it drives this home even more.

Before filming the scene, when RJ explains his disbelief to Wayne, and how Lorraine is too much of a nice girl to want something like that, Wayne is quick to dismantle this dichotomy of nice and naughty when it comes to being a woman. After all, Pearl goes around calling the women whores when she herself desires the same things they do.

Ultimately, Maxine survives and becomes the final girl because she got lucky – divine intervention in other words. And Lorraine could have survived if she had worked with Maxine instead of blaming her and the rest for her own actions. The film shows us that death comes whether you’ve followed the rules or not, so maybe the whole point is to carpe diem while you still can, so you don’t turn into a monster filled with regrets later on.