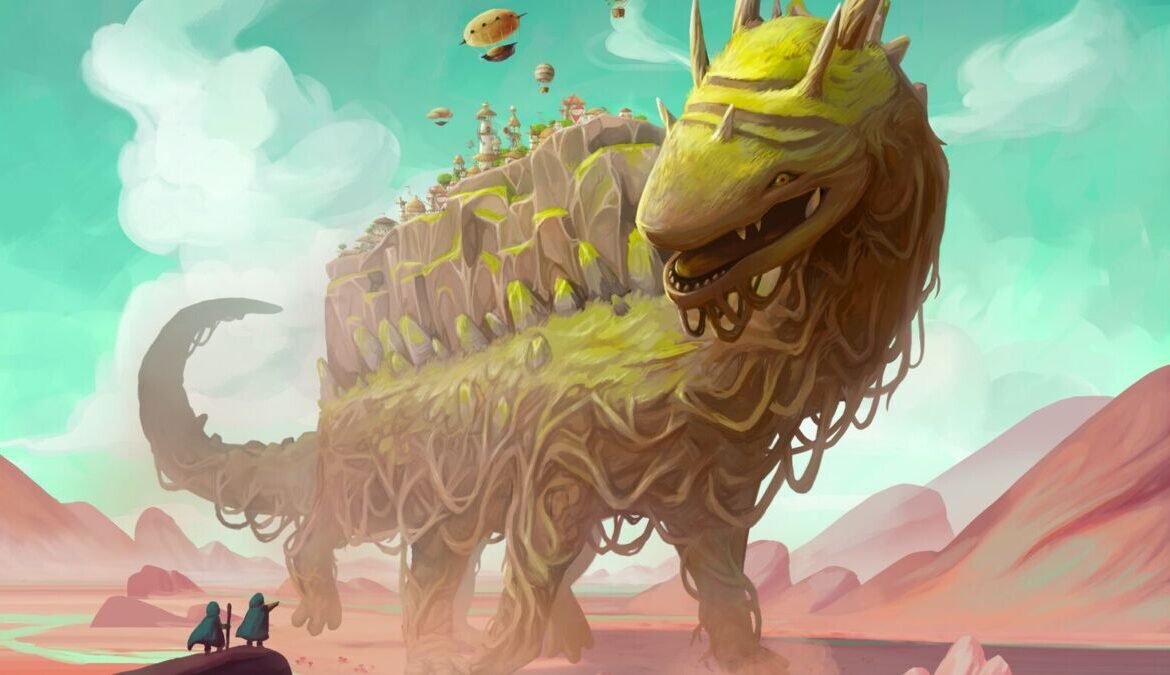 Some of the most mechanically and conceptually refreshing city builders come from the minds of indie development studios, such as Erik Rempen’s Kainga. Stray Fawn Studio is now taking its own signature creative approach to this subset of games, focusing on the idea of symbiosis between people and enigmatic avatars of life. The Wandering Village offers a full course of strategic city building, management, and survival delight, and while it’s visually stunning, it still needs to hit its stride.

The Wandering Village has you lead a small tribe of people who stumble upon a colossal mythical creature called Onbu. It’s so massive that its broad back can carry an entire town and the terrain is so lush that you can farm and grow trees on patches of grassland. Along with building up a successful town, you’ll be wandering across a mysterious land, all the while dealing with all sorts of dangers, such as extreme weather and toxic spores.

If the concept of building a city riding atop a gigantic wondrous creature doesn’t charm you right away, The Wandering Village’s top-of-the-line presentation will certainly do the trick. The art direction is distinct, with bright and vibrant colors capturing a sense of awe-inspiring wonder.

The animations are smooth and fluid for all the people and buildings in your village with the clothing helping distinguish employed workers compared to the general workers in your town. The music is sublime and shifts dynamically depending on the terrain Onbu traverses, though these tracks do repeat just a tad too much.

The developers have also successfully laid down a robust enough foundation to the city building core to keep you engaged and invested in the development of your mobile settlement. The challenge of harvesting resources, setting up logistics chains to process basic items into more advanced forms, and ranging out into the unexplored world with scavengers all give the game a steady and pleasant pace, as well as a low-level of exciting tension to see whether your village and town can survive the next shock.

Managing food production is perhaps the most fun in The Wandering Village. Each food type responds differently to changing climates and adapting your farming setup to best suit the various environments is wholly satisfying.

They’ve even introduced cacti as a plant type that acts as an alternate source of water rather than just as yet another type of food, which shows how creatively the developers approach basic city builder and management game tropes and mechanics. There’s certainly space to introduce even more unique food types and fresh interactions, as well as production chains, but what’s here is a great starting point.

The Wandering Village has a lot of gameplay hooks to pull you in, but there isn’t quite enough meat to leave you wanting to come back and play through multiple runs. It finds itself in a similar situation as Shiro Games’ Dune: Spice Wars in that there’s a solid start, but it hasn’t quite bloomed into a game that fully realizes its potential, at least in its current Early Access state.

A big reason why you’ll be left wanting more is the game’s shallow technology tree. For a game that oozes creativity from its captivating concept and clear visual design talent, the technology tree doesn’t offer much to prop up the longevity of the basic sandbox mode. It’s quite easy to research all the technologies you’ll ever need by the mid-game and some you won’t need altogether due to their unbalanced negative implications.

Replayability is another current weak point. While The Wandering Village markets and presents itself as a sandbox with constantly changing climate and weather due to a procedurally generated map, this system isn’t quite impactful enough to significantly change your approach to building your village. This ties back in with the relatively shallow tech tree, as well as a lack of Onbu types and terrain layouts that can spice up each run all the more.

Undoubtedly though, The Wandering Village has an undeniable visual flair to it and with the clear talent on display, it absolutely has the potential to truly come into its own over its Early Access lifespan. Currently, however, the game just doesn’t offer enough to dig into for a fulfilling experience. As such, we can only recommend keeping a close eye on The Wandering Village.