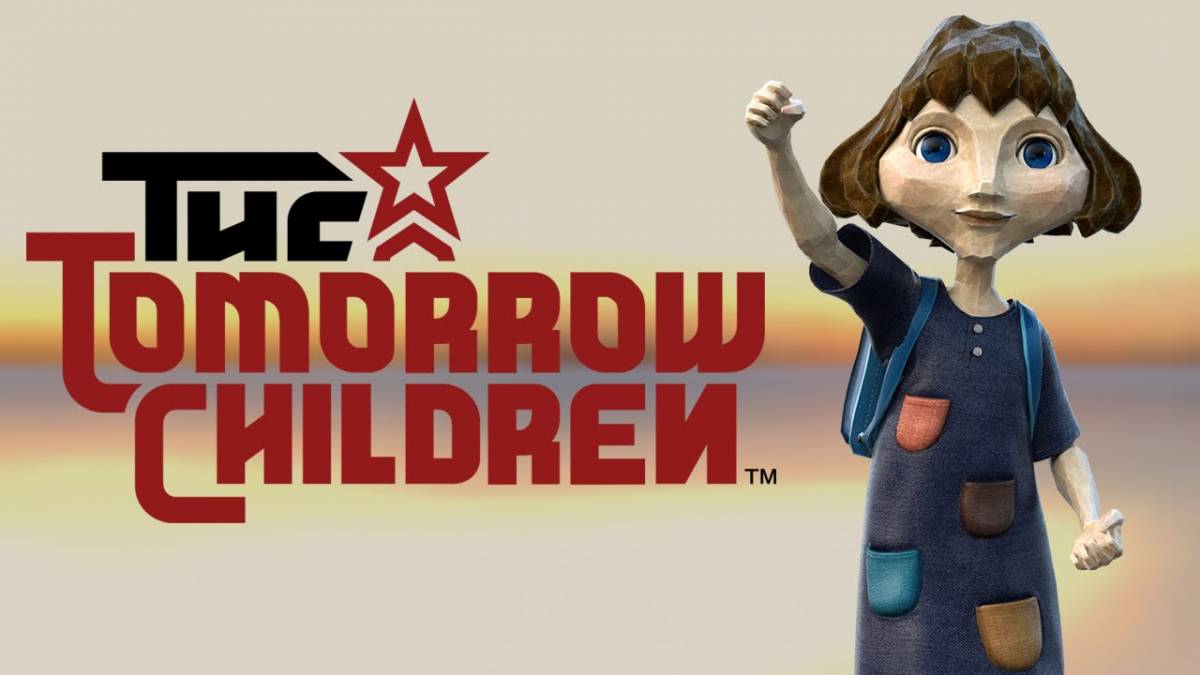 The Tomorrow Children is a now free-to-play social game available on the PS4 (was out for a price earlier this year) – and it’s pretty weird. There wasn’t much information about it on the PS Store screen, but as someone who’ll try all or most of the free games, I began the download.

It definitely helps to know a little about this game before beginning: even though there’s a short tutorial section, you’re basically completely thrown into the deep end. So here it is: in The Tomorrow Children you play as the projected holographic image of a little girl in a sandbox world called The Void; a large, white expanse that turns into quicksand if you stray too far from safe areas. The quick tutorial explains that islands arise from the void that are full of resources, and gives you a pick-axe to mine a hole into one. So far, so hashtag Minecraft.

You deposit the resources into an area marked out besides the islands that look like a room from a Cluedo board. The vibe hails back to the Soviet communist era, through the style and the cartoonish Russian accent of a voxel character in the tutorial monitor. 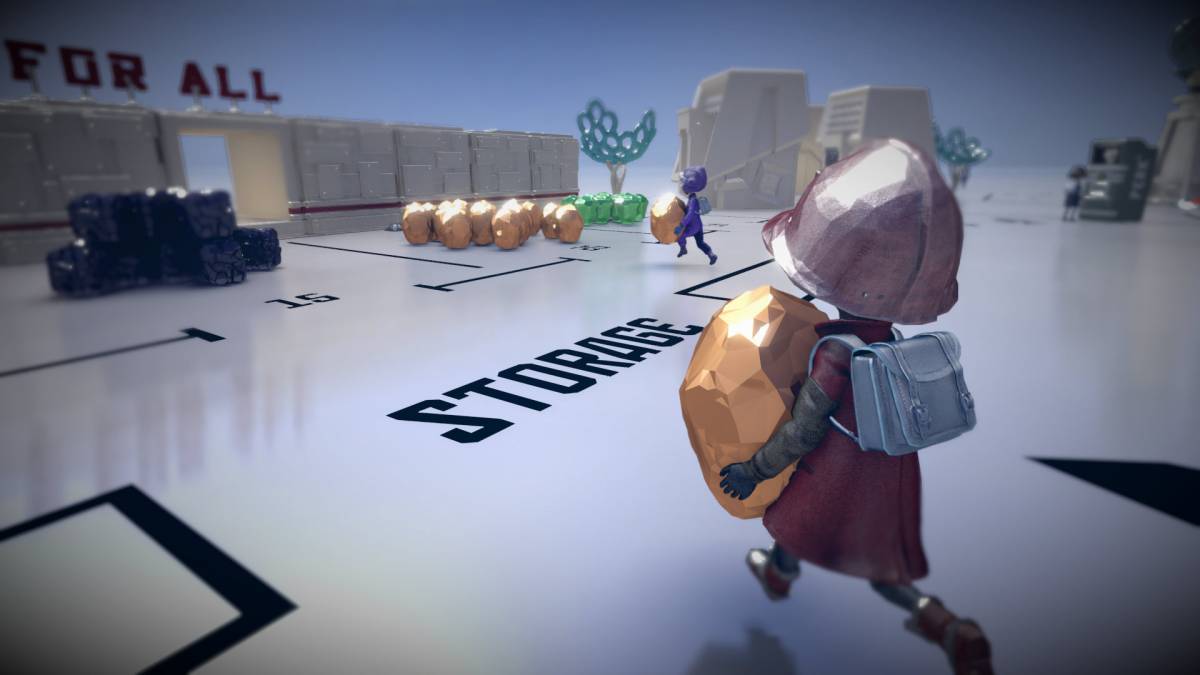 This style continues after you take the subway to a town, which is also presented like a 3D Cluedo board. There was some entertainment walking around the town and checking out all the structures, and soaking up the propagandistic overtones of the society. Little flashes of identical characters appeared like ghosts every now and then, particular in areas where it asks you to form a queue. I sensed from this that they were fellow comrades. Helpfully, there was an information board near the subway exit that explained in some depth what the hell was going on.

Your goal is to work for the state to rebuild all the devastated towns which were destroyed in an experiment that created The Void. In order to do this, you need to work with other players, gathering resources and building structures, while building up your own character to make all this work a little easier. The more you work, the more you toil, and you need to periodically go to the main office to request your rations. The more work you have done, and the more complex the work, the more rations you get. 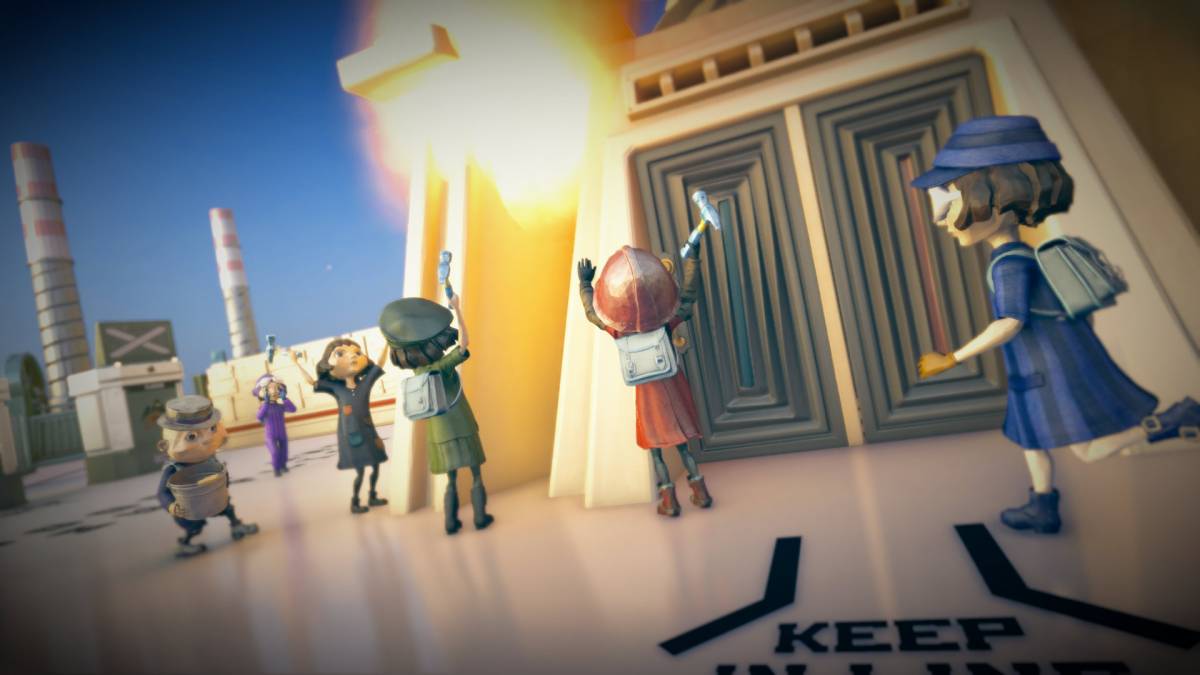 None of this is immediately evident. I was looking for somewhere to perhaps get a work assignment, and ended up shaking a tree. There were notifications that the town had no food, and randomly shaking one tree dropped an apple. Near the subway exit was a row of obvious resource piles, so I found the lowest number resources and dropped the apple. Voila! Hail, comrade! Goodthink and all that. Not a thoughtcrime crossed my mind! 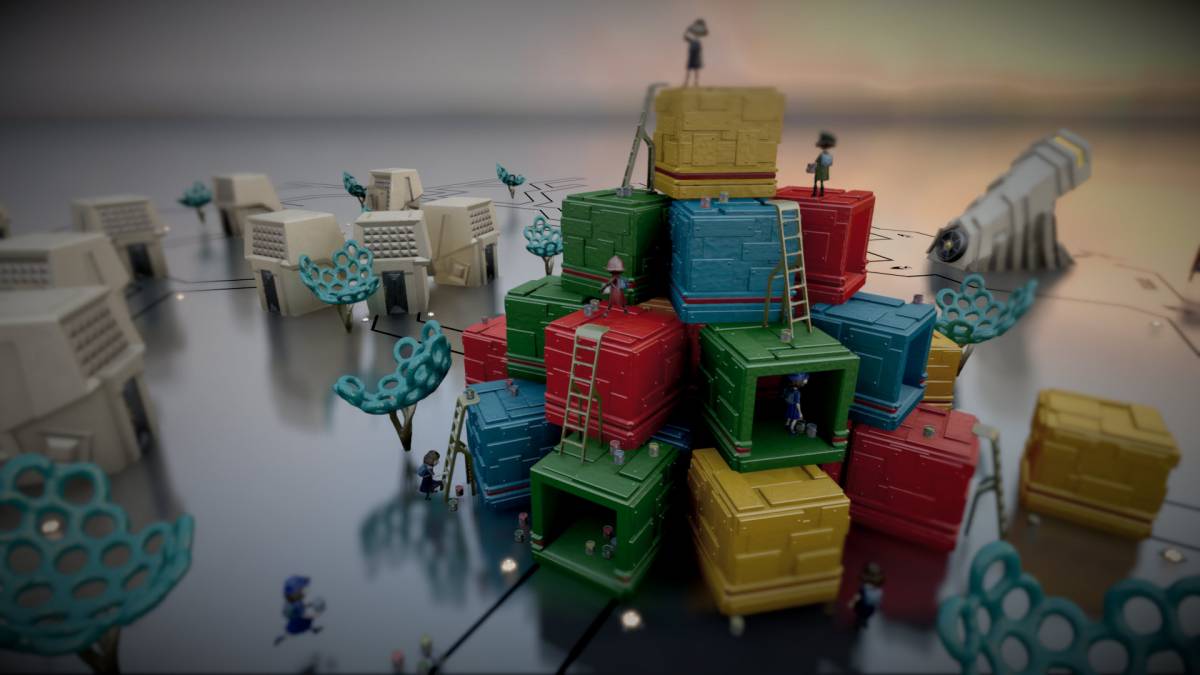 More exploration unveiled the matryoshka, which, if you know anything about Russia or dolls, you know are those nesting dolls that you open with ever decreasing matching dolls inside. They reside in the towns as living beings, and you can find dolls out in the world, which, if you bring back to the town will add to the population. As the town grows, like any good city-building simulation, so the needs grow, and you need to build more, mine more, build more, mine more. Luckily, with other players in the vicinity, you can focus on what you personally prefer. Or you can do it all.

You’ll need to take the bus to the resource island which springs up in random places around the town, and not always with everything you need. It’s a bit tedious to physically take this bus, but don’t do what I did and think that it can be skipped by pressing X. Do that, and you’ll leave the bus and begin sinking in the quicksand. It’s important to remember that this is a persistent, online world. No pausing. You wait for things to grow, be built or repaired. For instance, there’s only one bus, and it won’t wait for you.

At the resource island, you have to be quick about physically placing your resources onto the bus. While this may be bothersome to some, I found it refreshing that it was being this immersive (I was wondering if it would work in No Man’s Sky, and then thought better of it). There were bugs and issues though; for instance, in loading the resources, the bus would head off and some items would fly off the back. But it’s early days and things like this, and the odd clipping issue where a bus may go through a building, will hopefully be fixed.

There’s a host of tools and information at hand. For instance, you’ll need to buy different tools for different jobs: shovels, chainsaws, pickaxes; and you’ll need a source of light for when it gets dark, as you begin to disintegrate when the sun isn’t shining on you. I’m not sure what this adds. It was more annoying and tedious, than anything that added tension. These things will cost you. There are microtransactions to get the very best tools, or you can save and buy them later. The better the tool, the longer it will last, and the quicker it will work.

Pressing L3 brings up the town’s resources; figures that are constantly changing as they are used or added to. If all you want to do is supply, if that’s your thing, than it can be cool to watch the figures as they fluctuate, knowing that somewhere else, someone else is taking the resources off the bus and adding them to the stockpile. And that someone is using them to grow the town.

Pressing Options brings up a flurry of menus, most of which I still don’t really understand. I feel the game goes a little too far with its freedom, and a little more hand-holding would not have been a bad thing. There’s lots of info about the town and your avatar. At times, you level up, but I wasn’t really sure which areas of my avatar would be best to upgrade. I also wanted to attain a Tools Level 1 Pass (I think it was) at one point, but couldn’t find an explanation for how to do this. The learning curve is an important aspect for games which are a little out of the mould, like The Tomorrow Children. Chances are, not many people have played a game like this before, and even if they had, many of the mechanics are still not self-explanatory. It relies on the player being interested enough to stick around and trial-and-error a few things before getting to grips with its core. 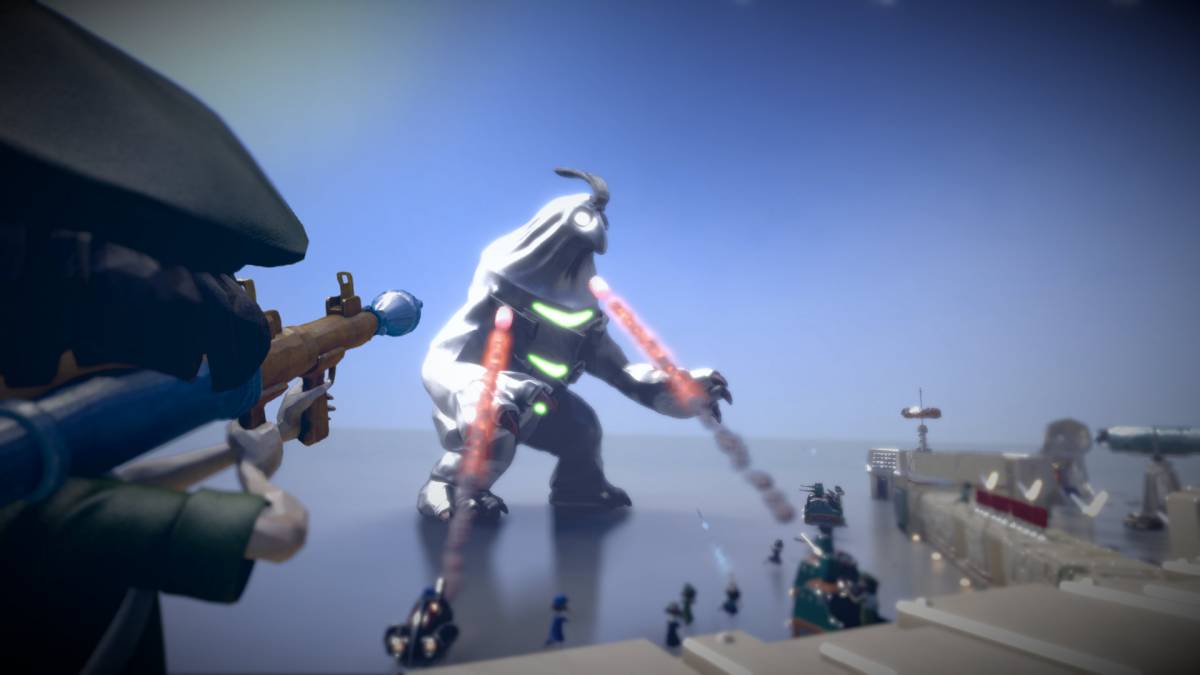 Adding a twist to all this mining and resourcing are the periodic monsters and creatures that show up. The larger monsters are Kaiju-like, stamping on buildings and people. Defensive structures can be built, and weaponry can be attained, though typical with the Soviet and communistic theme, you need to first acquire a license. These battles aren’t too difficult, but add some variation to the gameplay.

Before logging out, I made a note of the town, and was pleased to see that it had visibly grown. Working with others had been fun, but the lack of communication, beyond a whistle, is sure to mean that many towns will end up sprawling and sporadic, with perhaps little cohesion. I began a forest in one area, only to see some other tress somewhere else. Which is fine, but runs against the nature of collaboration it’s trying to achieve. You can also wait and wait for enough resources for one thing, only for someone else to use them before you get a chance. 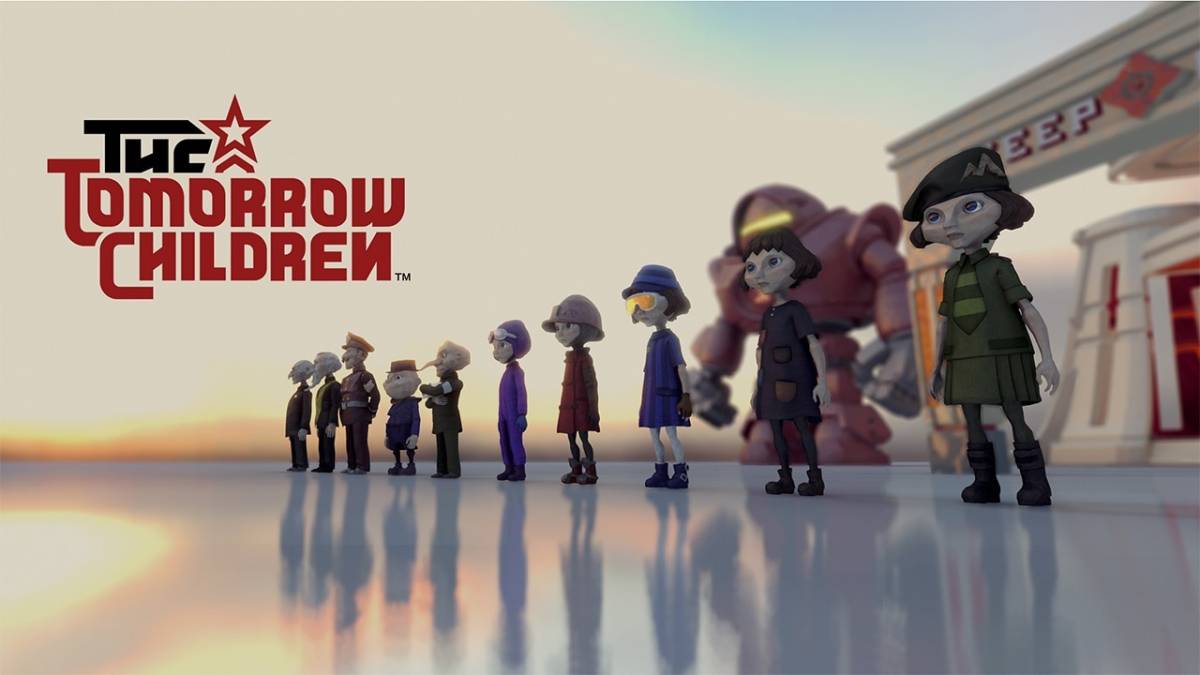 What will possibly a game-changer for many people, is that once a town has reached its potential, you are shipped off to another town that needs your help. I hadn’t got that far yet, but I checked online to see if I would be returning to my own little town next time I logged in, interested to see how it had grown in my absence, only to see these reports. If that’s how it is, and I won’t be revisiting the town again, then the sense of achievement is diminished. Why not get to a point instead, where the town is so large, that it begins to attract escalating numbers and sizes of monsters that need fending off? Or something else which isn’t just a dead end… Something gameplay related… Feels like a missed opportunity.

If you’ve read this article and you’re still unsure, then this game is probably not for you. If you got past the word ‘Minecraft’ without pressing the back button, and enjoy this kind of time-sink, resourcing and world-building game, then there’s enough here to keep you interested, at least for a while. The aesthetic is really pretty at times, with some beautiful skies and lighting behind the simple 3D, and the Soviet motif is something that keeps the genre fresh. As a grander tale of the woes of communism or the dangers of – what, experimenting with weapons? – it’s far too shallow, though I doubt there’s any intention to make a political statement here. And it’s free. It can be played without microtransactions, and is kid-friendly, even if they won’t understand some of the reasons behind the theme.