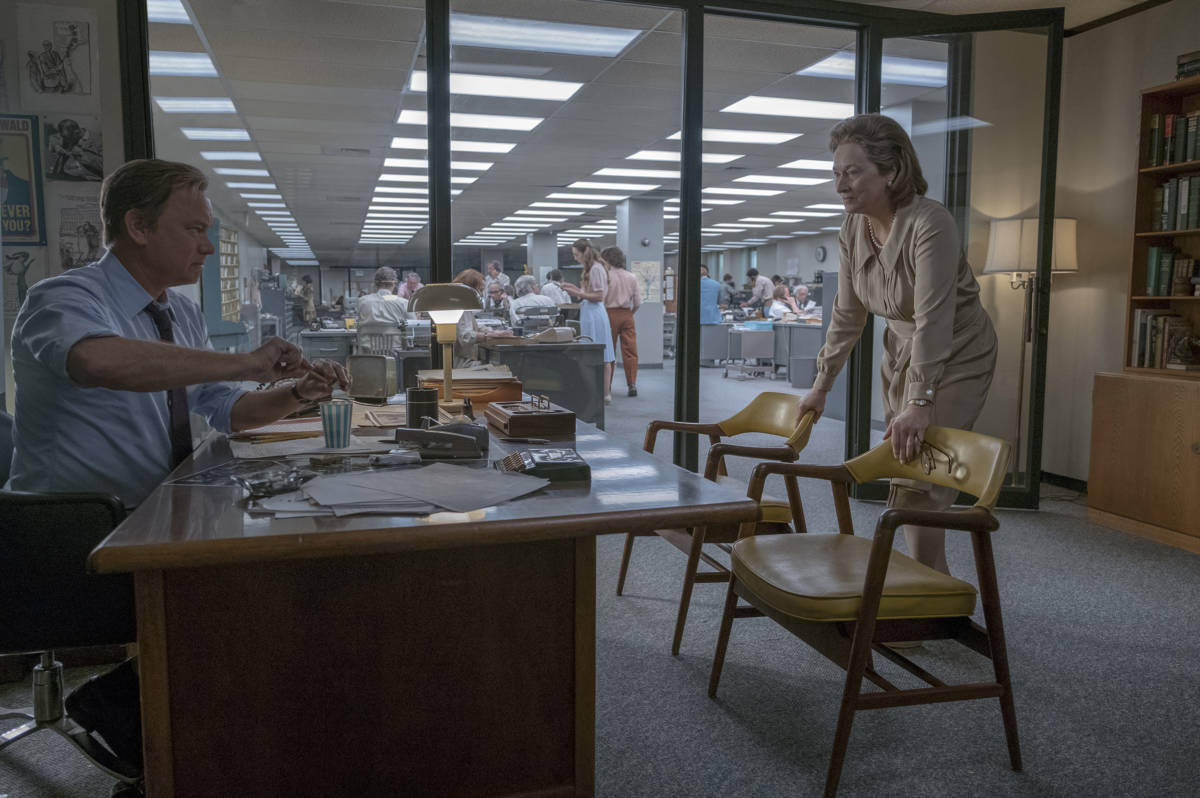 With the first of two films in a matter of months, iconic director Steven Spielberg’s The Post makes for a timely offering by the way that the film displays just how important it is for America to have a free press.

Spielberg’s journalistic thriller takes a screenplay written by Liz Hannah and Josh Singer and manages to turn it into a hard-hitting film that ought to make people think twice about what’s going on in America. Meryl Streep absolutely kills it as Katharine Graham, the first female publisher of The Washington Post. It feels like there are many points that come in The Post in which cinematographer Janusz Kaminski makes it crystal clear through the filming that she’s the only women in a room full of men. It’s one of the finest performances in a year that is stacked with contenders for leading actress in a film. It’s up to Graham as to whether or not the paper defies the Nixon administration by going forward with publishing The Papers.

The film takes place during a time in the early 70s when The Washington Post was still considered to be a local paper. They hadn’t gone public on the stock market nor had the Watergate break-in occur which would help catapult the paper’s popularity on a widespread scale. Managing editor Ben Bradlee (Tom Hanks) was driven and determined to make the newspaper one of the best in the country and the public offering would help through the hiring of additional reporters as, in Graham’s words, “Quality drives profitability.”

The dialogue that takes place in the newsroom while discussing the reaction from the Nixon administration to the Daniel Ellsberg (Matthew Rhys) leaking the Pentagon Papers could very well be similar to the the commentary being said today in the newsrooms across the United States while discussing the Trump administration. It’s reasons such as this that make the new Spielberg film one that’s very timely. Much credit goes to Spielberg for getting this film rushed into production but locked before Thanksgiving weekend when The Post was screened for film critics.

It’s a hard-hitting film and yes, it will play better to liberal viewers than a conservative audience. It’s the conservative audience that really needs to see The Post. Whether they will or won’t is up to them–those who were turned off by Meryl Streep’s speech at the 2017 Golden Globes probably won’t bother to show up.

“We can’t have an administration dictating our coverage just because they don’t like what we printed about them in the newspaper,” Bradlee tells Graham during a meeting while discussing the hammer coming down from the Nixon administration about their coverage of the Nixon family. It’s one of the most timeliest lines said in all of cinema for 2017.

In The Post, The Washington Post works quickly to catch up to what The New York Times is doing.  Bradlee realizes something is going on when one of the top reporters for the Times hasn’t had an article published in three months.

There’s a stealth Mr. Show reunion through casting Bob Odenkirk and David Cross as the award-winning journalist Ben Bagdikian and managing editor Howard Simons, respectively. Neither actors play their characters to comedic fashion even though they got their start in comedy. Odenkirk, who broke through in a big way in Breaking Bad as lawyer Saul Goodman, gets his own turn to shine in a large supporting role. Bagdikian uses his past relationship with Ellsberg as a way to obtain The Papers. Credit the production here for going out of the way to fully recreate all 7,000 pages across 46 volumes and manage to get the same Xerox machine that Ellsberg used.

Recreating the 1970s is not an easy task but if anyone can do it, it’s Spielberg and his trusted team of cinematographer Janusz Kaminski, film editors Michael Kahn and Sarah Broshar, production designer Rick Carter, set decorator Rena DeAngelo, and costume designer Ann Roth. Most of Spielberg’s crew have worked with him for a number of years, including the legendary John Williams. The composer, working under a time crunch, comes through with another top-notch score–this one feels restrained but comes through in a strong way when needed.

The quintessential choice in recreating the period was to shoot The Post in 35mm film. Throw in the lighting, color palette, and costume designs, and the 70s vibe is one that comes off in viewing rather than a modern-day film full of digital effects.

“In the First Amendment the Founding Fathers gave the free press the protection it must have to fulfill its essential role in our democracy. The press was to serve the governed, not the governors.”

The film segues nicely into an already-made sequel, All The President’s Men, when a security guard is shown discovering the Watergate break-in. The scene is one that comes off as a serious scene that Marvel is typically expected to do during the mid-credits. As such, The Post joins many other films in 2017 that could have ended a scene earlier with Streep and Bradley walking out together.

Without a free press, democracy wouldn’t work as a free press is what is needed in order to provide a check on those in power. In The Post, Spielberg revisits one of the most important times in journalistic history and directs an ensemble cast to some top-notch performances.

20th Century Fox opens The Post in select cities on December 22, 2017 with a nationwide expansion planned for January 12, 2018.