Home
Gaming
Is The Lord of the Rings: Return to Moria Coming to Steam?
Gaming Tips & Guides
·2 min read

Is The Lord of the Rings: Return to Moria Coming to Steam? 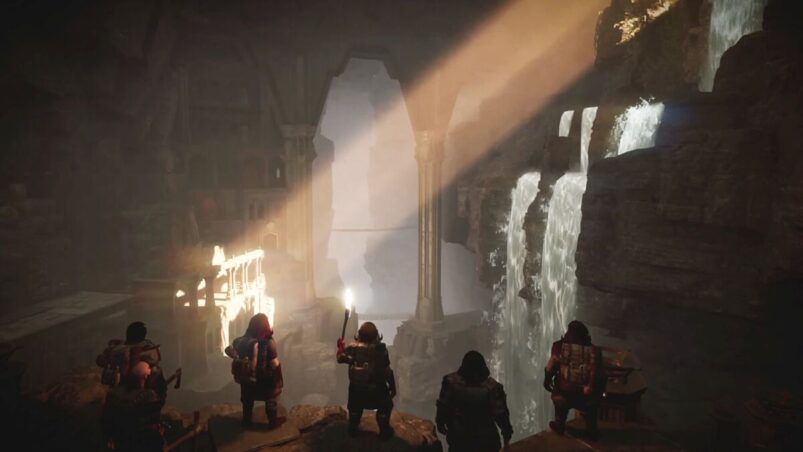 This new Middle-earth adventure is being developed by Free Range Games, an indie studio, with North Beach Games as its publisher. It’s set to release in the spring of 2023, and unfortunately for all console users, it’ll be exclusive to PC.

Before you get too excited about this new LOTR game, you’ll want to know which PC platform it’ll be released on. Sadly, it looks like gamers that use Steam will be out of luck.

About The Lord of the Rings: Return to Moria

The Lord of the Rings: Return to Moria is set in the Fourth Age of Middle-earth, which is the Age of Men. After the game’s official reveal, Corey Olsen, best known as the Tolkien Professor, confirmed that he’s been consulting on the game.

The game focuses on the Dwarves of Moria as they set off to reclaim their homeland, Khazad-dûm, and bring it to its former glory. Free Range describes it as a crafting survival game, and finding resources, such as ores and artifacts, will be crucial to gameplay, enabling players to forge new weapons, bases, and other items.

A company of dwarves is gathered and sent off by the one and only Lord of the Glittering Caves, meaning Gimli of the House of Durin makes an appearance. Players can create their own member of the company using the custom character creator and enhance them throughout the game.

You’ll need to mine to find much-needed resources and advance within the game, but beware, as one does not simply walk into Moria. Hidden dangers are lurking below that could be awakened by the noise from mining. Remember what happened when the Durin dwarves dug too deep.

You can strengthen and enchant gear in the dwarven forges once they’ve been rebuilt. No two adventures will be the same since it features a procedurally generated realm. You can play Lord of the Rings: Return to Moria solo or online with up to 8 companions.

The Lord of the Rings: Return to Moria & Steam

The Lord of the Rings: Return to Moria will be released in the spring of 2023, not too far behind Gollum. The game is a PC exclusive, although it’ll possibly come to consoles later.

Unfortunately, LOTR: Return to Moria won’t be available on Steam. The game is headed to the Epic Games Store upon its release.

While it’ll be an Epic exclusive for a while, it should eventually make its way to Steam, as the game isn’t published by Epic — this typically means that it’s just a timed exclusive. Still, it’ll be at least a year before the game is available on any other platform, including Steam, so fans will have to wait patiently if they want to play The Lord of the Rings: Return to Moria on anything other than Epic.

READ NEXT: Is Alan Wake 2 Coming To Steam?