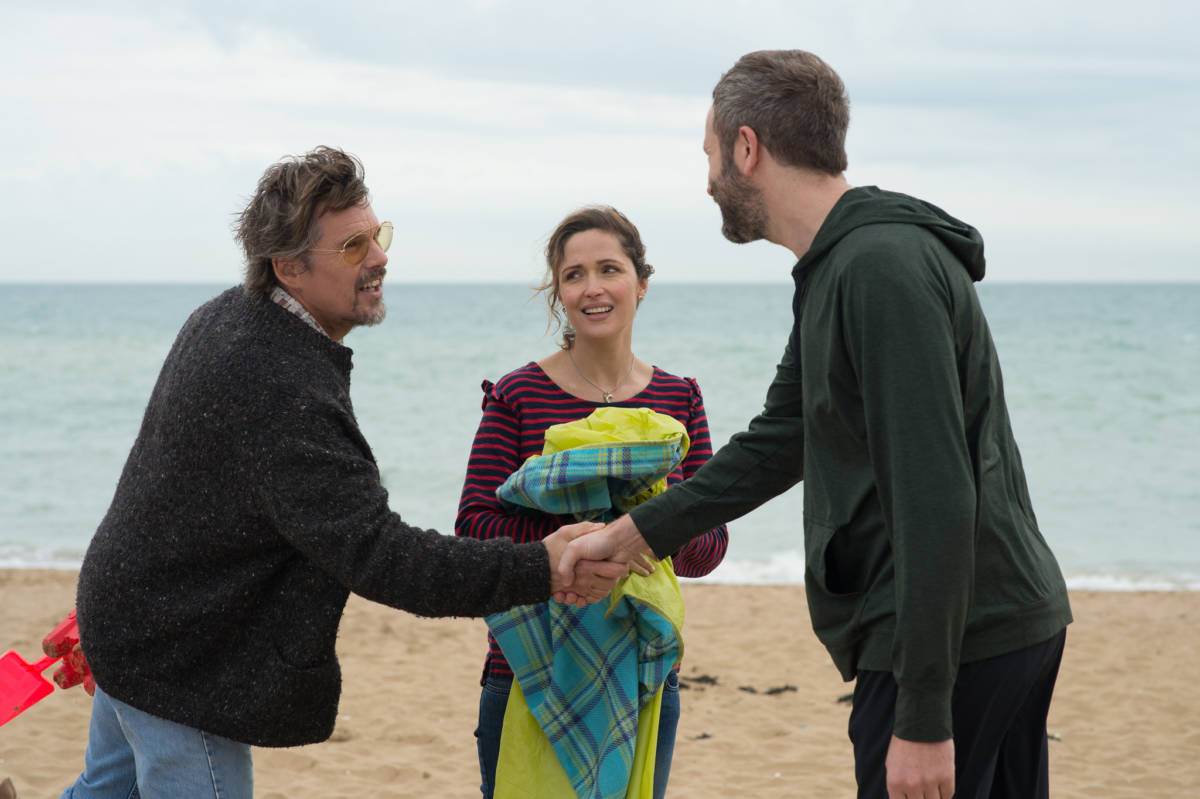 Based on the Nick Hornby book, Juliet, Naked is a film that comes off as Apatowian in nature with a overgrown man-child playing a large role at the center of the story.

After directing various TV series’ for the past several years, Jesse Peretz directs his first film since 2011’s Our Idiot Brother. Tamara Jenkins & Jim Taylor and Evgenia Peretz adapt Hornby’s novel into screenplay form. Juliet, Naked is the more enjoyable film of the two films penned by Jenkins that premiered over the weekend at Sundance.

Annie (Rose Byrne) has spent the last 15 years wasting her life with her husband, Duncan (Chris O’Dowd), who has been obsessed with rock star Tucker Crowe (Ethan Hawke). Duncan, a university lecturer, runs a fan site and has been obsessed with the mission since his breakthough album, Juliet, in 1993. Unfortunately for him, Crowe has disappeared from public life but he continues with his obsession nevertheless.

Annie never moved away from her hometown. She took over from her father as the administrator of the Seaside Cliff Museum and she’s always worried about her younger lesbian sister Ros (Lily Brazier). Despite being based on a novel, Ros could easily be plucked into any film produced by Judd Apatow and not appear out of place.

Crowe enters Annie’s life when someone mails the original demo album of “Juliet” to their house. Ever the man-child, Duncan is furious to learn that she heard “Juliet, Naked” before he could. It’s not until after he writes his review that she comments on the fansite and receives an email from someone claiming to be Tucker Crowe. Wanting to get confirmation, Annie starts emailing back and forth as she develops an online relationship with Tucker. Their relationship is better than the one she has living with man-child Duncan as Annie is able to open up on so many details about life.

As for Tucker, he’s living in the garage of one of his ex’s in New Jersey, where they are co-parenting their son, Jackson (Azhy Robertson). He doesn’t want to make the mistakes with Jackson that he made with Jackson’s older half-siblings. When his pregnant daughter, Lizzie (Ayoola Smart), visits from London, she informs him that she tracked down Grace, his supposed first-born.

Byrne clearly owns her performance in Juliet, Naked. Her character is one of the stronger female characters that have been seen early on screen in 2018. It doesn’t go without saying that there needs to be more of them.

While Juliet, Naked is a funny film, the filmmakers aren’t afraid to get serious when they need to. In typical Hornby fashion, there’s a way to find the humor in a bad situation, such as when Tucker finds himself in the hospital after suffering a heart attack. Some of the funniest and uncomfortable scenes are when Duncan interacts with Tucker–never more so than when Tucker discovers his shrine.

When push comes to shove, Juliet, Naked is about getting a second chance in life. It’s what makes this film so enjoyable.

An official selection of the 2018 Sundance Film Festival, Juliet, Naked was a part of the Premieres program.