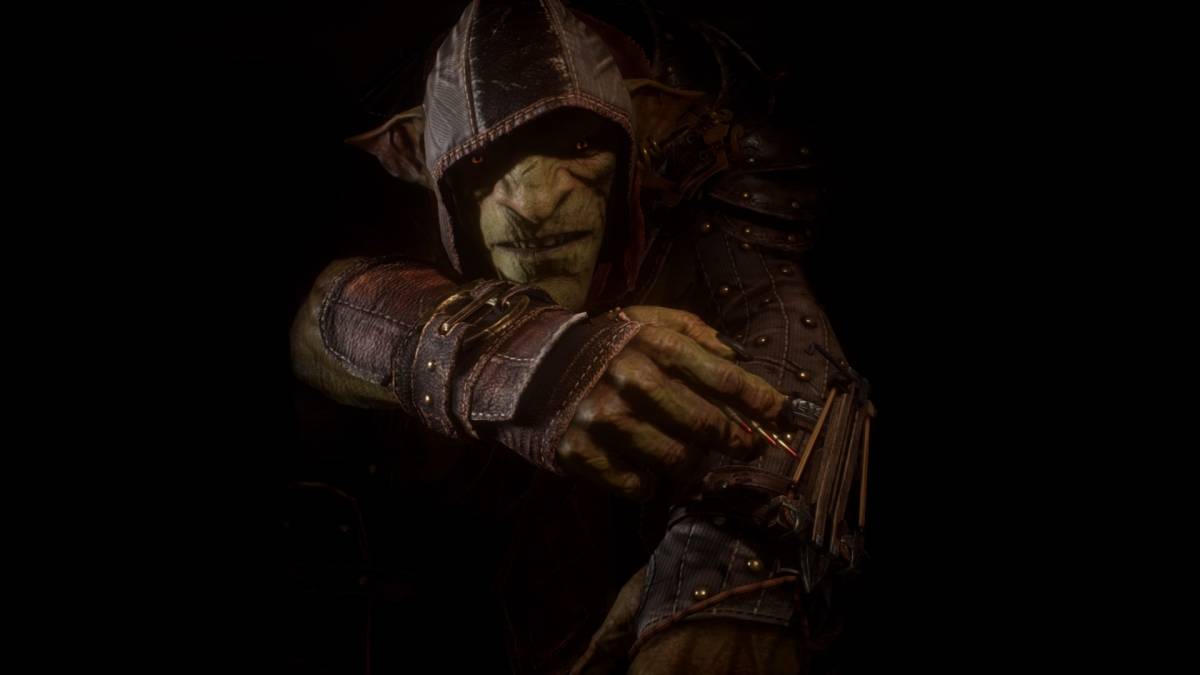 There was a time not all that long ago when it felt like stealth games were on the way out, or at least nowhere near their halcyon days. In the past couple of years, however, hiding in wardrobes has become more popular than ever, especially with the huge names of Dishonored 2, Hitman, and Deus Ex proving successful.

By no means a huge name, it’s Styx’s turn to join that pantheon of must-play stealth games. Despite some very rough edges, Shards of Darkness is a charming throwback to the inch-by-inch stealthing of days gone by. 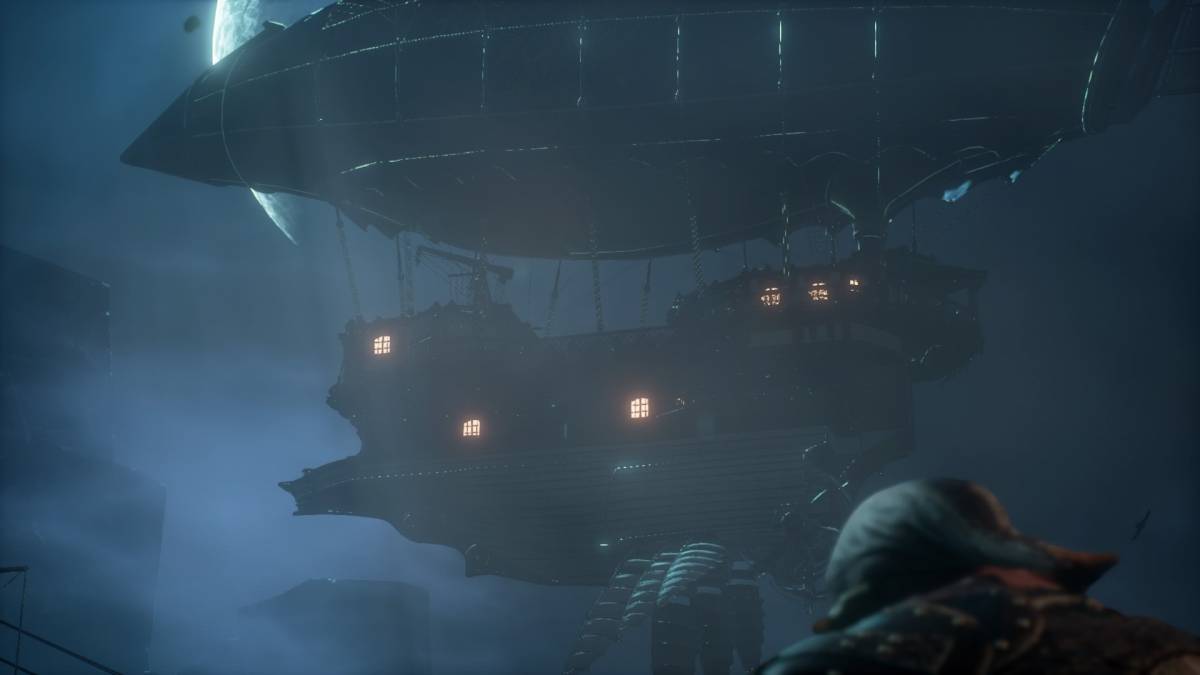 Seen for the first time since the so-so Master of Shadows, Styx, a little green goblin with a worse attitude than John Connor in Terminator 2, is back to sass his way to infamy. He doesn’t have the gruff coolness of Adam Jensen, the efficiency of 47, or the ability to clear a room like Corvo, but it’s hard not to be endeared by a protagonist who tells his captors to drink his piss.

Master of Shadows never quite clicked with me; I played it for a few hours, but never felt that pull, the thing that kept me coming back game over screen after game over screen. Luckily, the guys at Cyanide have had three years with Shards of Darkness to refine the experience to make it a much more addictive title, despite offering plenty of frustrations. 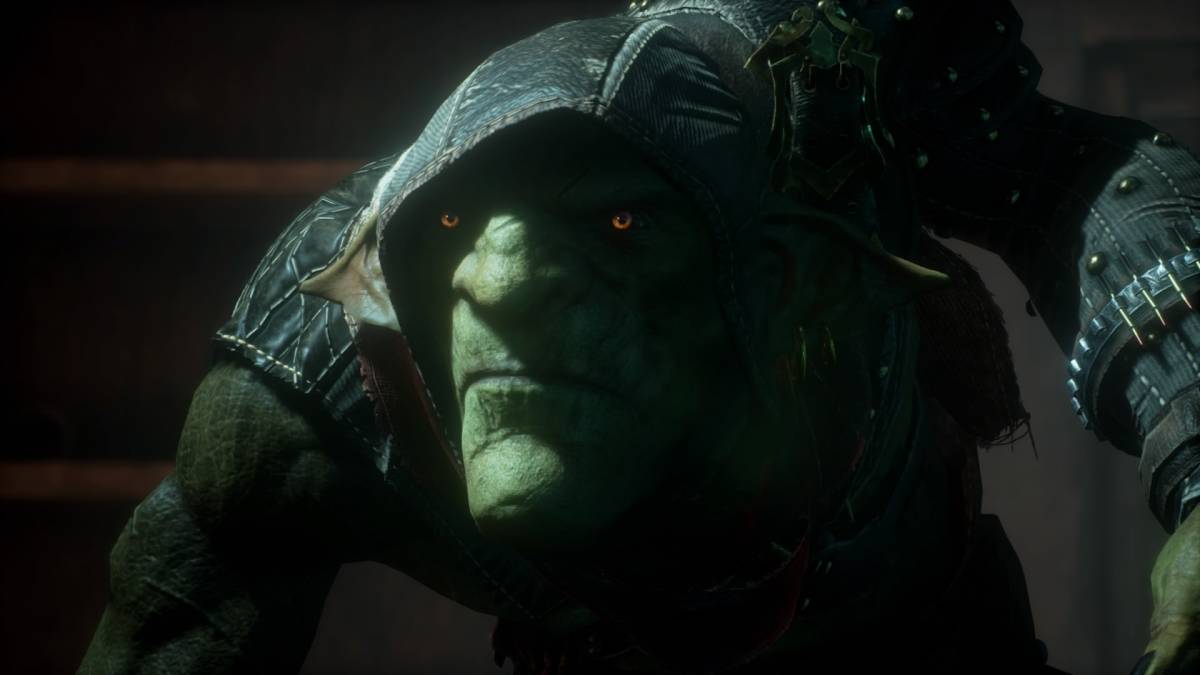 Much like last year’s Aragami, Shards of Darkness takes the player back a few years to a stealth style that has plenty in common with the likes of Thief. Styx cannot attack enemies unless undiscovered and when he is, he can only parry and hope to land a killing blow. A lot of the control is taken away from the player, which makes it that much more important to strategise before just bowling into a room. There’s no shortage of places to hide, whether it’s in the cover of darkness, hanging from a ledge, or inside the classic wardrobe, but you have to remain on your toes.

To help the player’s sanity, quicksaving is as easy as a press on the D-Pad. This is welcomed and balances the game’s difficulty by allowing you to celebrate small victories. For instance, one section was threatening my mental stability, making me struggle for what seemed like hours. Elves were patrolling a compact area and were flanked by Roabies, mutated bugs who can hear a pin drop. Using a combination of arrows, traps, and a lot of luck, I was able to get past it and return my breathing to normal. Being able to instantly save once I was clear felt miraculous, though it could put the player in a quandary if they’re about to walk into trouble straight after saving. 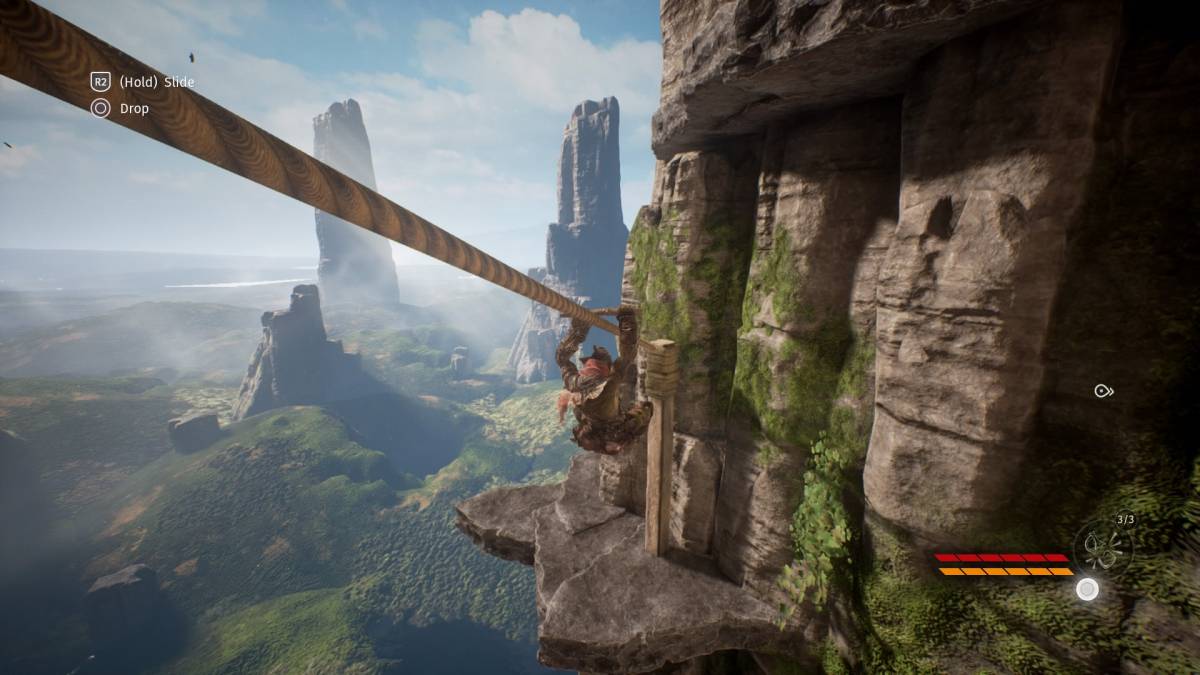 The AI, even if it does love to walk into walls and get stuck sometimes, is punishing. You can’t realistically expect to just run past a rabble of elves or dwarves and be able to escape; many of the game’s enemies kill in one blow. Even the “weaker” enemies will only need three hits to make you reconsider your life choices. Playing as an underpowered goblin might not sound like a lot of fun, but the magic and tools at his disposal open up the field, particularly if you’re a sadist.

Despite typically going for the old school method of stealthing (i.e moving ten inches per hour), I still found a lot of fun in turning invisible or conjuring a clone to confuse the game’s varied enemies. The former is ideal for when your cover is just about to be blown while the latter allows you to create a version of yourself to distract guards. In my experience, both used an awful lot of amber (Shards of Darkness’ mana), so I saved them for emergencies. 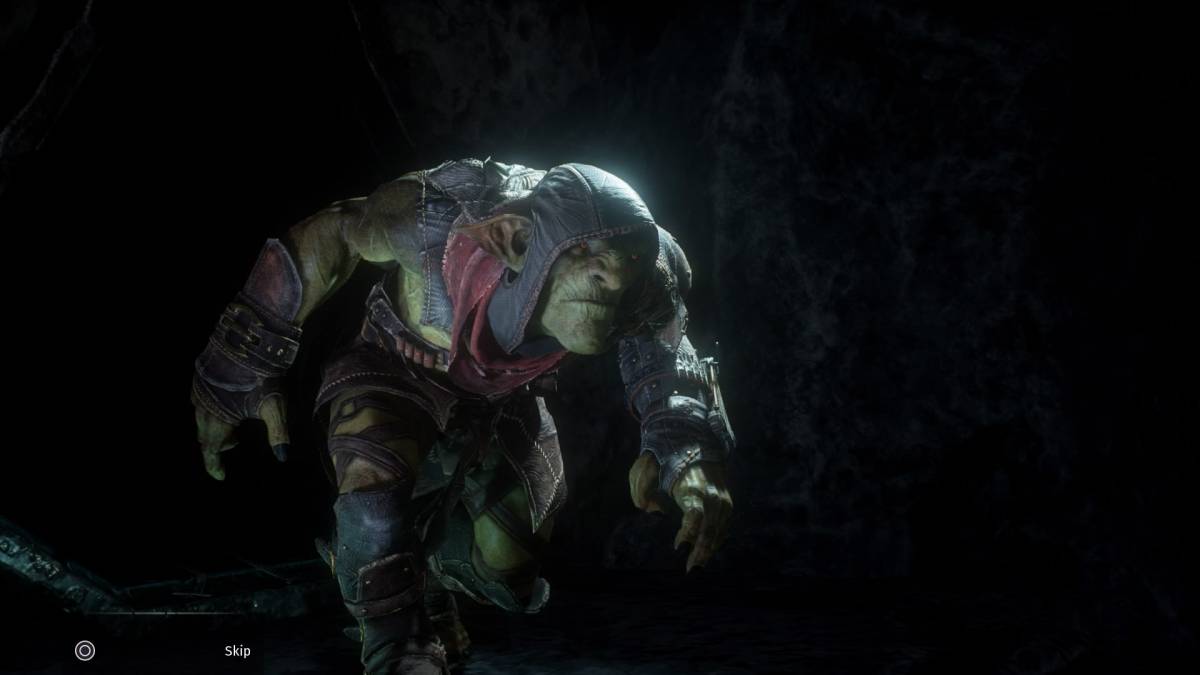 Elsewhere, Styx is able to craft traps, one-shot arrows, and other contraptions to help him see out the day. Again, these require parts, which are usually scattered all across the game’s open levels, so they may not be at your disposal all that often. That being said, when you are able to set up an acid trap, don’t be surprised when the maniacal laughter and hand rubbing starts.

Shards of Darkness’ wide-open levels are one of its brightest spots, offering multiple ways of taking on objectives. They’re much more detailed than in Master of Darkness, which often felt flat and a little bland. This time out, it’s almost as interesting as anything else in the game to uncover all the secrets a level holds, though it’s a shame there aren’t more of them. You will keep revisiting the same places in Shards of Darkness, which saps the fun out of progression – I don’t want to see another city of elves for quite some time. 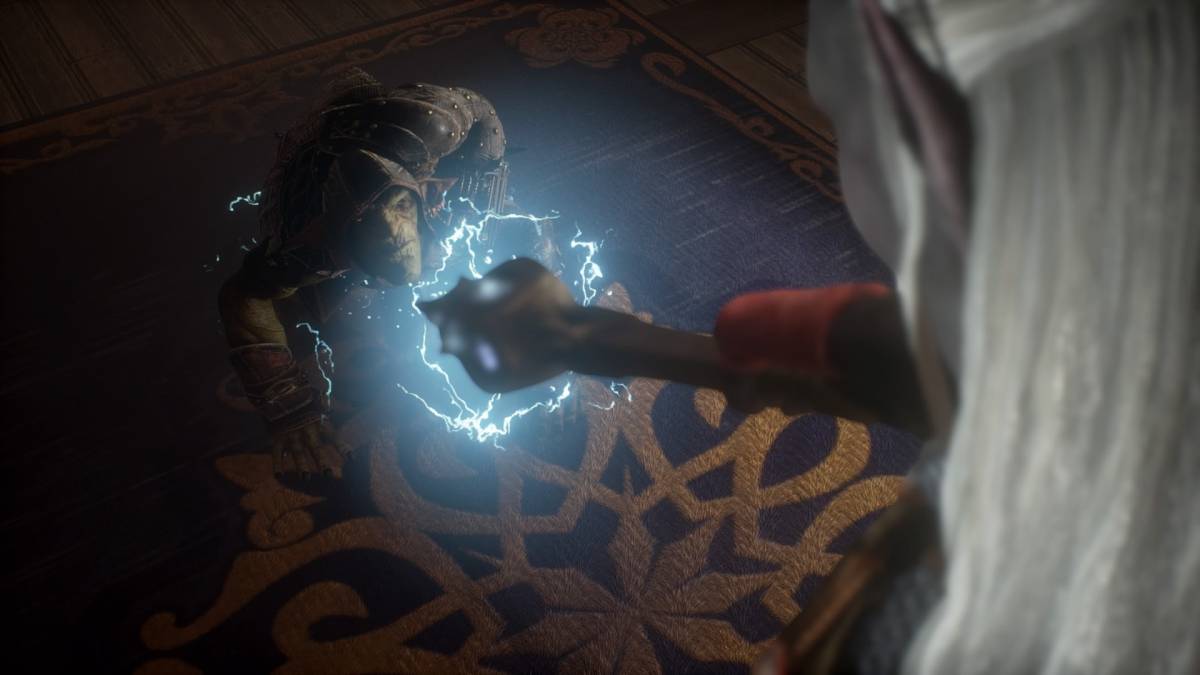 Storywise, Shards of Darkness is filled with enough tropes to sink its premise. It’s largely uninvolving stuff, revolving around a threadbare revenge narrative and goblins being controlled against their will, much to Styx’s chagrin. If it wasn’t for Styx himself, constantly wise-cracking and reacting in the stupidest ways to serious situations, it would be easy to turn off. The secondary characters lack any, well, character. Their dialogue is poor and their voice acting even worse – the performances are so uneven that some seem to be trying too hard while others aren’t trying at all. Couple that with some rather basic speaking animations that seem like they’re missing half the frames and it’s really hard for the player to connect.

Playing on PS4, Shards of Darkness runs fairly smoothly, though it does chug along when the alarm bell is rung and enemies converge on Styx en masse. As well as that, enemy attack animations are janky, so it’s more difficult than it should be to parry. This is counterbalanced by how great it feels to play as Styx: he’s clearly the star of the show and the most time has been spent on making him shine.

As a budget title, it’s easy to overlook some of Shards of Darkness’ slight technical hiccups that ultimately don’t take much away from the experience. Fans of the original should adore this follow-up that acts as an antithesis to Assassin’s Creed et al, but newcomers may also be in for a nice surprise. It’s been released in an inopportune window with massive AAA games still giving players dozen of hours of playtime (Breath of the Wild, Horizon, NieR: Automata), but this isn’t a game you should allow to disappear into the shadows. Styx would probably call you a pussy anyway.

PS4 copy provided by publisher. Also available on PC and Xbox One.

Verdict
Shards of Darkness is a lovingly crafted stealth game with some rough edges that are easy to overlook thanks to the charm of its protagonist.
8