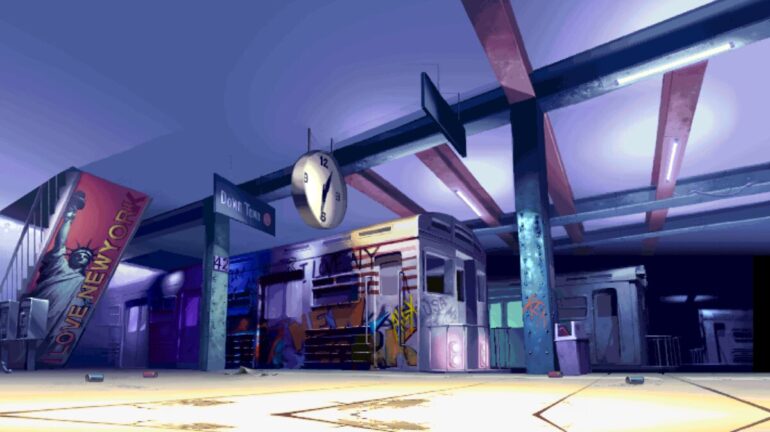 There’s a lot of love for fighting games here at Cultured Vultures, but one of the most underappreciated aspects of a fighting game is the stages: the enclosed arenas where two titans collide in epic battle. We thought we’d spend some time every now and then celebrating the best stages fighting games have to offer, starting off with an absolute classic, and the birthplace of a legendary esports moment.

While still not technically a street, the NYC Subway Station stage in Street Fighter 3: Third Strike could go down in history as one of the most iconic and brilliant stages in perhaps the best fighting game ever made. In a series known for its bombastic stages, a New York subway seems like an unassuming and rather muted stage, but for many reasons, this one stage is perhaps the single most recognisable 2D stage in fighting game history.

The background art alone is simply gorgeous to look at, in both the bright Ken variant and the dingier, darker Alex version. The stage does an excellent job of capturing the grime and personality of inner city New York, with the graffiti covered subway car lying dormant in the background, giving the stage a splash of colour. The Statue of Liberty mural is also absolutely fantastic as a bit of cheesy, tourist trap bait. Functionally, the colours are muted, allowing the player to focus entirely on the action in the foreground, which is essential when you’re trying to parry your opponent’s attacks.

What might distract you instead is the absolutely incredible music that’s featured in the background. Titled Jazzy NYC ‘99, the music is pretty much as advertised: a jazz tour-de-force that’s the perfect musical accompaniment to uppercut dudes in the face. Jazzy NYC ‘99 is the embodiment of the jazz and hip-hop influences that permeate throughout the game’s soundtrack. Heck, the title track, Third Strike, and the character select theme, Let’s Get It On, are rap bangers that belong on anyone’s Spotify liked songs.

However, the reason that Subway Station is pushed from great to truly iconic is because it’s the site of the instance that came to define and push fighting game esports’ into the stratosphere: EVO Moment 37. During EVO’s semifinals match between Justin Wong and Daigo “The Beast” Umehara, Justin had a huge life lead and, wanting to close out the match, launched Chun-Li’s Houyoku-sen Super Art, a fifteen hit flurry of attacks that would have deleted the last vestige of Daigo’s health.

Sensing Wong’s plan, Daigo managed to parry all 15 hits of the Houyoku-sen, even going so far as to jump into the air to parry the final hit, before launching his own combo capped off by Ken’s Shippuu Jinraikyaku Super Art. Parrying in Third Strike requires pressing towards the opponent during a tenth of a second of the attack landing, and Daigo managed to achieve that feat 15 times in a row. At that point in time, it was unheard of, and it’s a moment that’s been single-handedly credited by Justin Wong himself as saving the fighting game scene.

Sometimes, a fighting game stage is worthy of merit purely based on its aesthetics and soundtrack alone, and in those categories, Third Strike’s NYC Subway Station is already a cut above the rest. When combined with the legacy that the stage is a part of in EVO Moment 37, and how that legacy has come to be a defining aspect of fighting games ever since, this stage is Hall of Fame-worthy.

READ MORE: 10 Fighting Games That Deserve To Be Resurrected Next-Gen