Netflix knows what we want, and gives it to us like the dirty, salivating dogs we are. 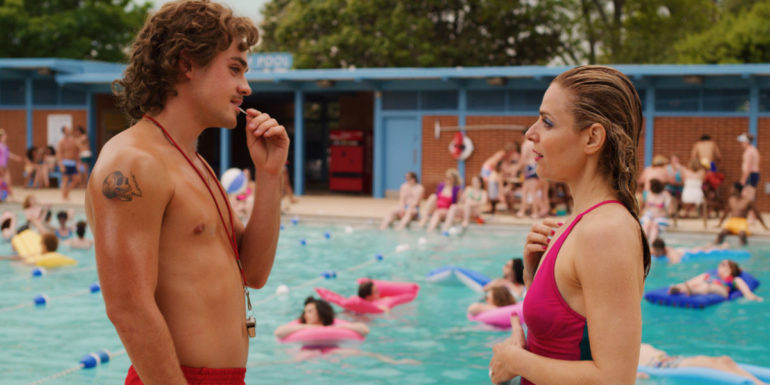 It is 2019 and Netflix officially has us on the hook. They seem to have developed a knack of knowing what shows to add to their expansive arsenal, as well as expertly aware of how to promote said shows to us in order to pique our interest. Of late, these promotions all seem to revolve around sex and popular relationships, rather than the narrative of these shows. The most glaring examples involve TV shows Stranger Things and Lucifer.

If you are like me, you would have Stranger Things Season 3 queued up on your Netflix, ready for your viewing pleasure. It has been quite the trip to get here, and the promotion of this latest season has been the strangest (pun intended) one I have seen. The first thing I need to talk about is the first trailer we got, with our old pal Billy (Dacre Montgomery) strutting around the pool in all his swimsuit glory, as well as a bunch of the local moms waiting for him to appear so they could ogle him. While I was similarly titillated (I’m only human, and Billy is quite the male specimen despite his dodgy character), at the back of my mind I was struck by how objectified his body is. Most of us would have picked up on the chemistry Billy shared with Mike’s mom in season 2, and though it offered us some laughs, it is disconcerting to see it further fleshed out in this season 3 trailer. Essentially, what Netflix is offering us are female fantasies made flesh.

This is not only for Stranger Things, but is also seen in the promotion of season 4’s Lucifer, which was picked up by Netflix for this latest season. In the teaser trailer, we see a wet Tom Ellis (who plays the titular character), emerge in slo-mo from a hot tub, stacked with abs with a 666 tattoo on his hip, leaving our imaginations soaring as he smoulders at us through the steam. Littered in the comments, besides racy comments, are proclamations of excitement for the new season, and how they can’t wait to watch it.

Even in Lucifer’s Season 4 Netflix promotion, we get Tom Ellis in a robe drinking out of a Netflix cup, stripping off to go film a scene, with the thin strap of a chair covering his bottom, leaving us all mouths agape at the teasing Netflix is so obviously dangling at us. They have figured out the game: sex sells, of course, but they are mainly drawing our attention to these elements for the purpose of promoting these shows. I doubt that Stranger Things or Lucifer will just be Billy and Lucifer strutting about shirtless the whole time, no matter how many people would watch that.

While browsing YouTube, I was immediately notified of new promotional material for Stranger Things, which includes a compilation video of the Mike-Eleven love story as well as a lookbook of the cast at the premiere. Initially, I thought the Mileven video was fan-made, and then lost my mind when I saw that Netflix is the one that created and posted it. Essentially, the clip charts the whole Mileven relationship from season one, all the heart-wrenching moments between the two, like when Mike tells Eleven he talked to her for 353 days, and she says “I heard”. A video like this wouldn’t be complete without showing their kisses as well, though it is a tad weird for the adult audience to be shipping young kids like this – it’s more innocent than showing off Dacre Montgomery’s body, but plucks at people’s heartstrings in a similar way.

The Mileven fandom lost their collective minds over the video, which helped to build the hype for the season 3 premiere. The hype train continued with the release of the lookbook of the cast, and Netflix builds on the Mileven ship even more by having the actors who play Mike and Eleven (Finn Wolfhard and Millie Bobby Brown) in the thumbnail. The two show up in majority of the clip, once again a move by Netflix to give us what we want.

All this promotion and buzz has obviously benefited the shows involved. Lucifer has been renewed for season 5 (which will be its last season) and Stranger Things, while not exactly needing the promotion, has certainly kept our interest. The Stranger Things trailer has been criticised though, for attempting to normalise and make light of the objectification of a younger man by an older married woman. While Montgomery isn’t really that young in real life (he is 24), the thought is still a little icky. Regardless of where our opinions are on the trailer, the show leaning into their audience succeeds in creating conversation and discussion, which at the end of the day just brings more attention to the show. So enjoy the new season of Stranger Things – I will see you on the other side (or, if you prefer, the upside down).