While the story might not be great, the atmosphere more than makes up for it. 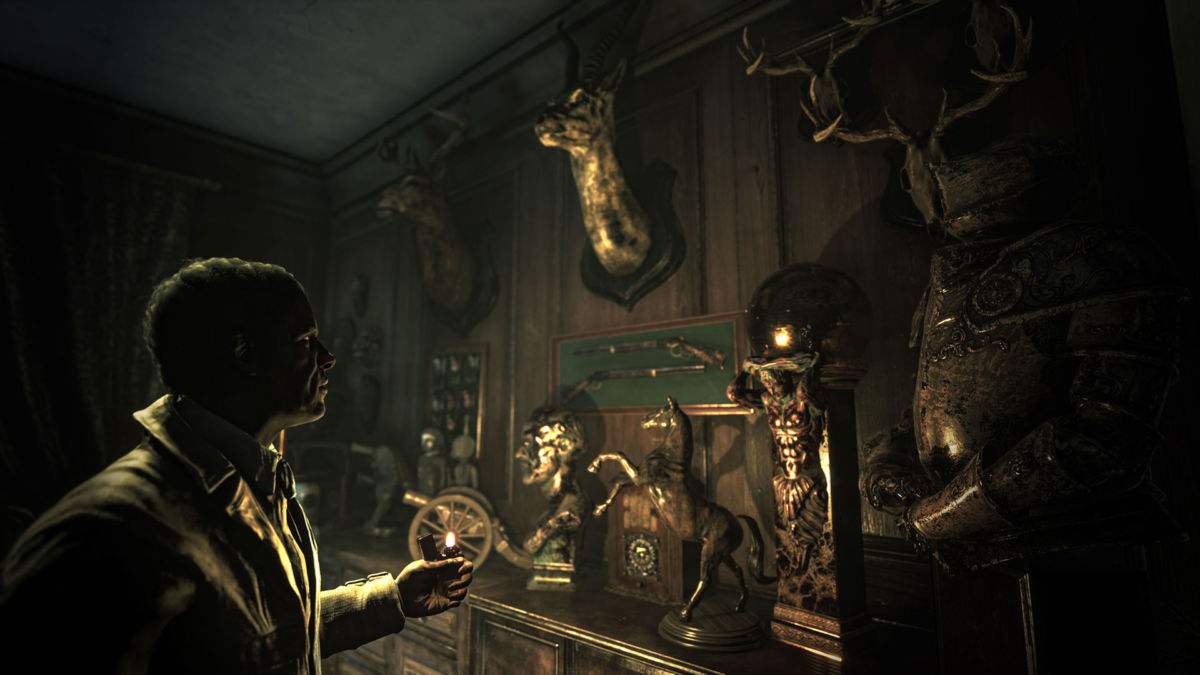 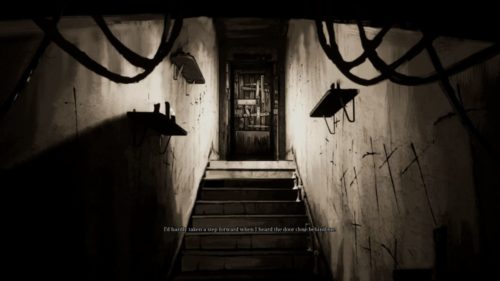 A haunted music box. An abandoned mansion. A door that leads to a staircase that shouldn’t physically exist. Stop me if you’ve heard any of these before. Song of Horror has a limited amount of originality to pour into a horror game, and it doesn’t seem to waste any on a unique story or interesting characters. It’s a fairly tame puzzle game, the only way in which it’s different from a standard point-and-click is its third person, environmentally fixed camera angles that are drawn straight out of an early Resident Evil game.

In the introduction, we meet Daniel, a recovering alcoholic working his way up in a publishing company. Daniel’s boss calls him up on a Friday evening and asks him to go check up one of the company’s darling authors, Sebastian Husher. When Daniel falls off the radar, too, it falls to the first episode’s cast of bland, poorly voice-acted characters to go into the mansion and find him. 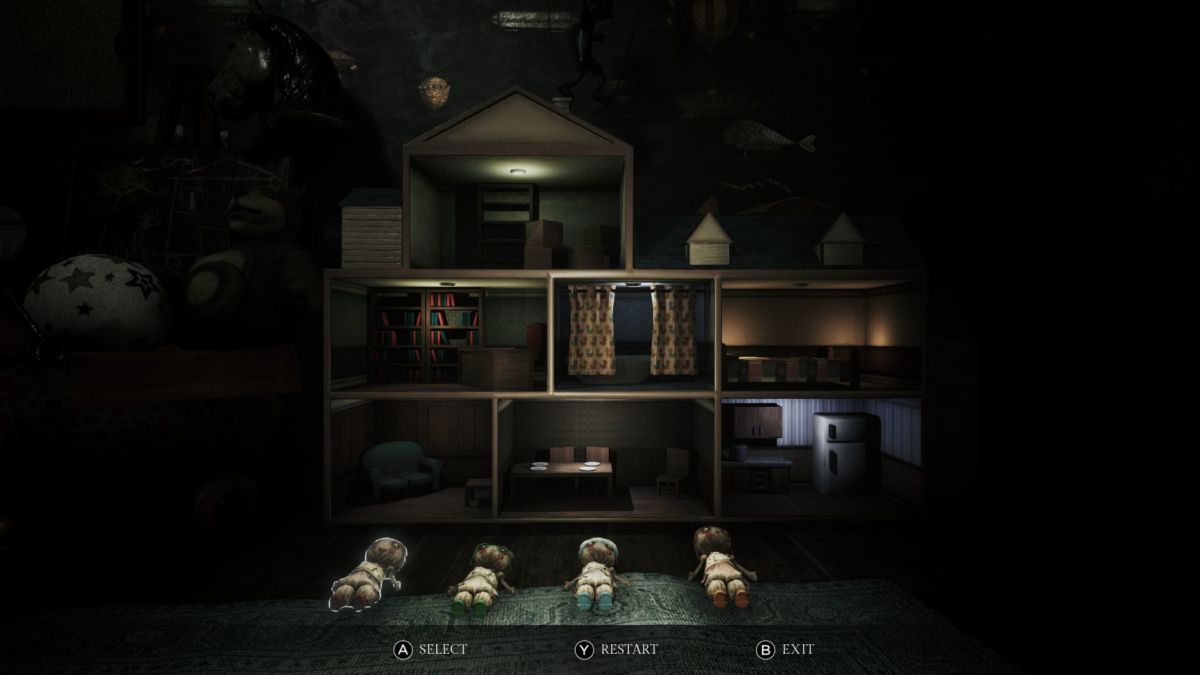 Unfortunately, these characters are nothing special. You have four to choose from for the first episode, all of which are thematically connected either to Daniel or to the Husher’s and their mansion. The first option is Sophie, Daniel’s surprisingly involved ex-wife. Second is Etienne, Daniel’s boss, while the third option is Alexander is the groundskeeper, who goes in search of his wife Masha, the Husher’s live-in maid. Finally, Elina is an electrician for the home security company that installed the Husher mansion’s home alarm. In my playthrough, Etienne was the one to find Daniel, so it’s a bit unclear what happens in the story if Alexander or Elina find a seemingly random recovering alcoholic in their client’s house.

However, with the way the story flows, or rather doesn’t flow between the first and second episodes, it may not be a significant difference. The second episode moves the setting from the Husher mansion to an antiques shop in the middle of a city. The environment opens up a bit, moving from cramped hallways to a spacious display room and even an open, rainy courtyard. You’re searching for a haunted macguffin that caused the creepy events in the mansion using a different roster of four characters. The episodes are pass/fail, as well. Unless all four of the first episode’s characters are killed, you move on to the next. 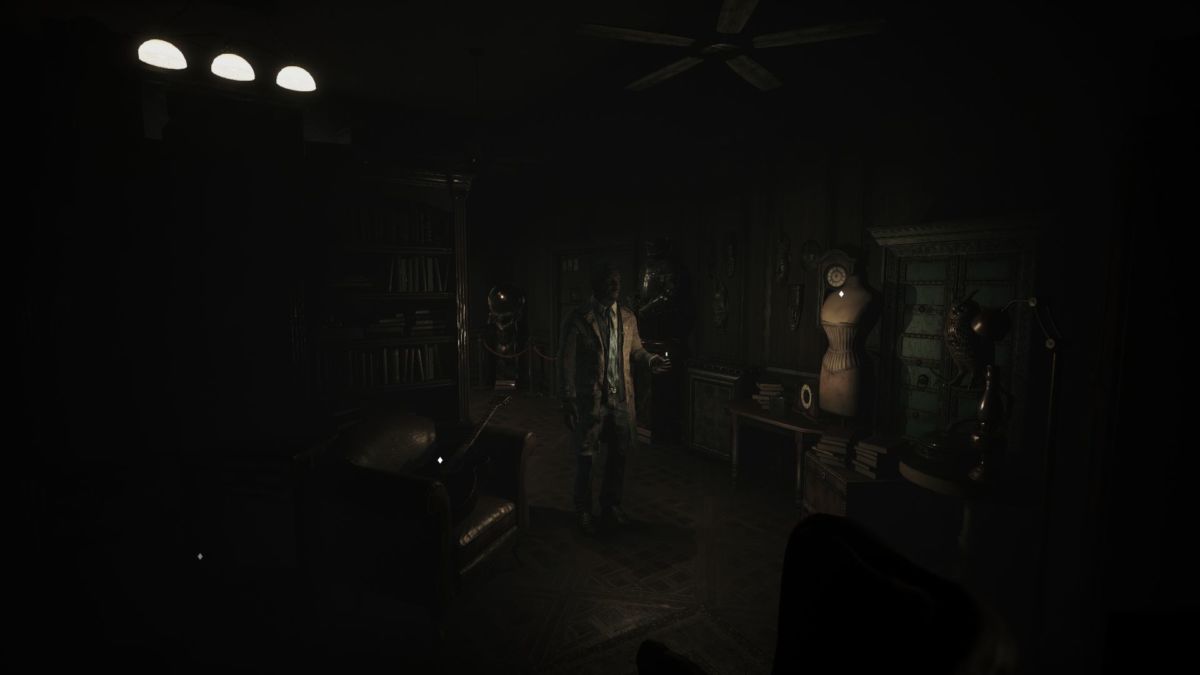 Speaking of death, permadeath is an unorthodox feature for a linear horror adventure game of this kind. In almost every other way, Song of Horror is a fairly standard and uninspired adventure game. You walk around a static environment, searching every nook and cranny for any button prompts representing items to examine, interact with, or pick up. Where this game diverges, however, is that opening the wrong door or choosing to mess with the wrong object could lead to the instant and permanent death of one of your four characters.

In this manner, Song of Horror’s difficulty comes in two forms. The first is the difficulty of its puzzles, which are not easy on their own. Experiences will vary, but when there’s only one very precise way to progress, the frustration can mount quickly. The second form of difficulty is the permadeath. There are multiple tense moments where you’re met with a “yes/no” prompt, knowing that a right choice will solve the puzzle and open up the next section of the episode, and a wrong choice will lead to a jump scare and one less character on the roster. 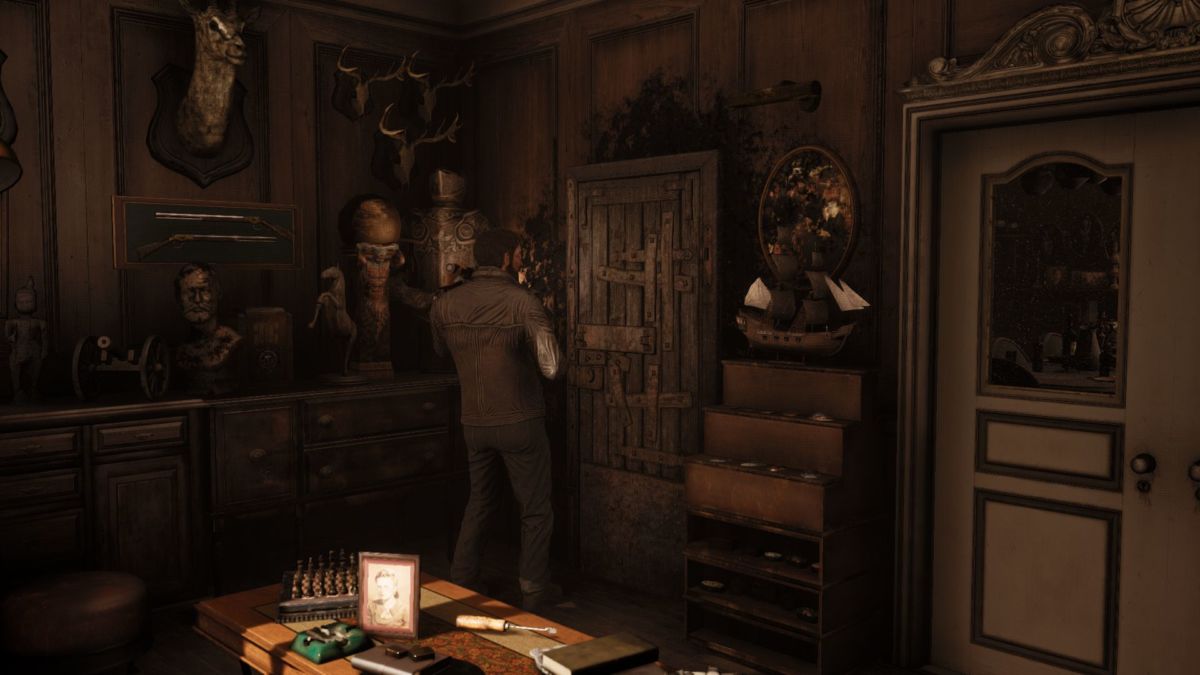 Instead of poking around every possible interactive object in the environment, you have to be cautious. Investigate the wrong corner, pick up the wrong thing, or open the wrong door, and your current character can be instantly and permanently killed. This feature becomes increasingly frustrating as the actions that will lead to character death become less and less obvious.

Over the course of the first episode, I lost three of the four available characters in increasingly unpredictable ways. The first death was practically expected. I was stuck, unsure of how to move forward, checking every open room and touching every available object searching for the path forward. I had passed over one door because it had an evil looking, shadowy presence on the other side that growled at me whenever I walked near, but after multiple sweeps through the entire house, I was desperate, so I gave it a shot. I walked up, opened the door, and Sophie was consumed by the dark entity. I chalked that one up to my own obvious mistake. 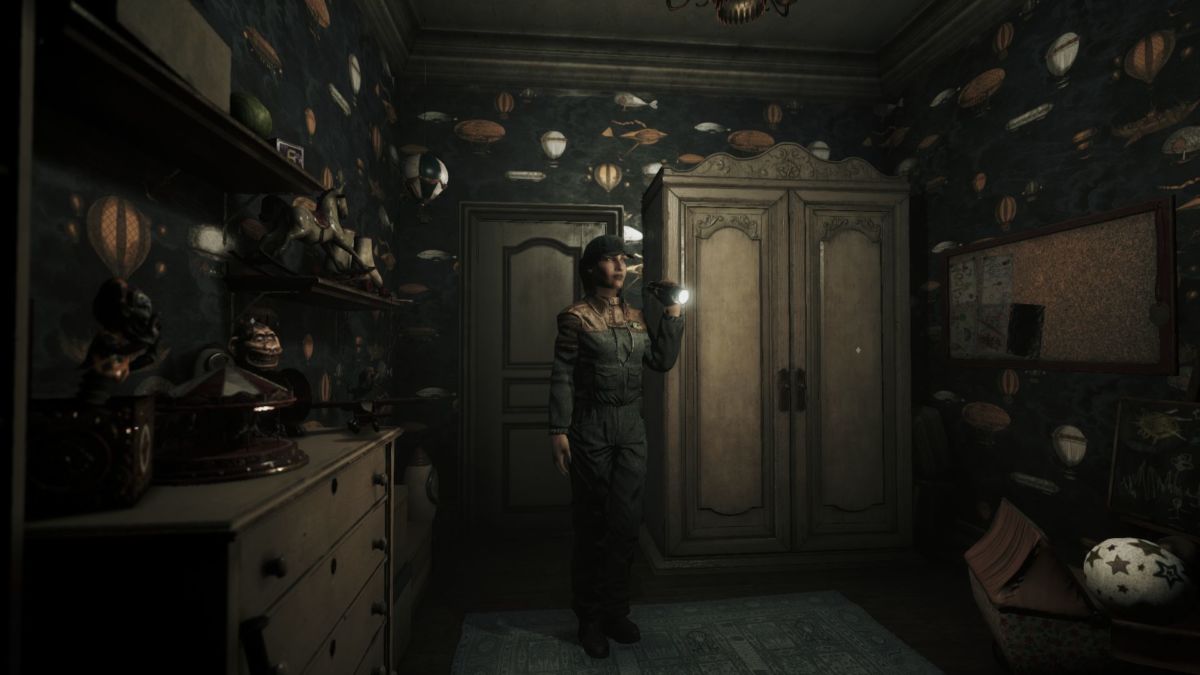 My second character, after retrieving Sophie’s items, Dark Souls style, quickly found a small hand towel in an adjacent room that unlocked the next section of the house. A few minutes later, he approached a quiet, harmless looking door, listened for any sign of monsters on the other side, and was met with silence. Without spoiling what happens, he was killed without any warning.

Death in Song of Horror is fickle. At times, it is obvious in hindsight that you shouldn’t have opened that door or stuck your hand somewhere. Other times, there is no indication at all that what you’re about to do is dangerous, and you lose one of your very limited lives in some obscure way you couldn’t possibly have predicted. 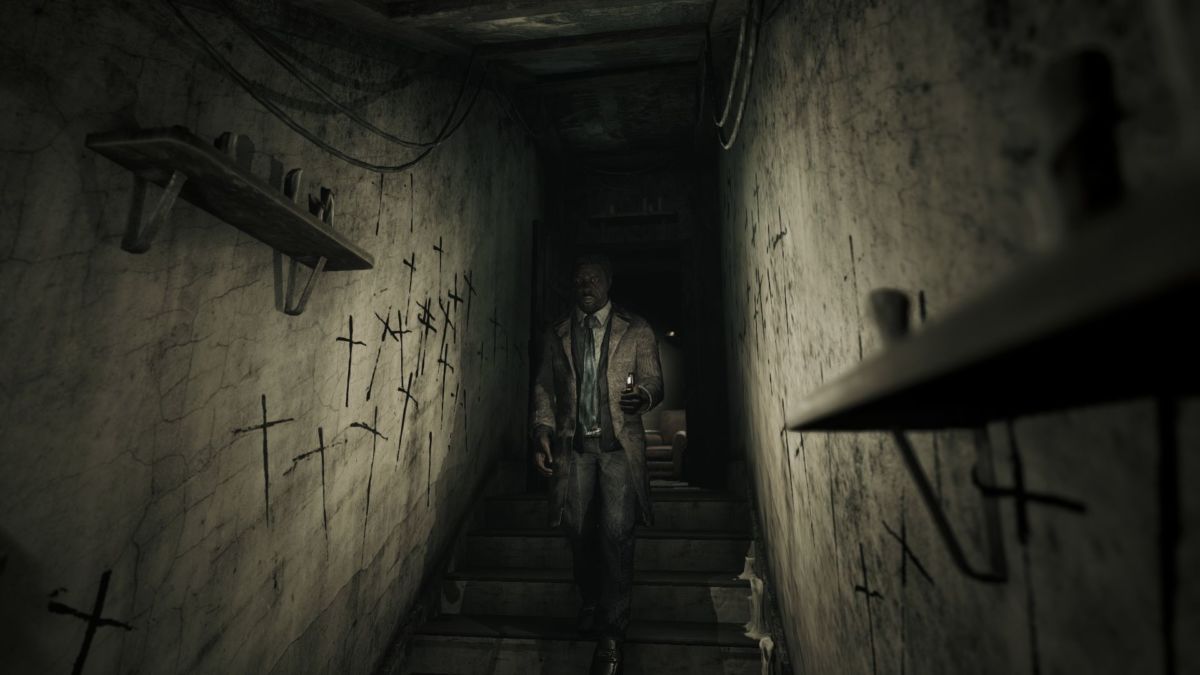 Technically, there is another way that a character can meet their end. Song of Horror features an “enemy AI that adapts to your every move”, which manifests in two ways. Occasionally, at random moments, the “darkness” will attack, and your character will have to quickly take shelter inside a wardrobe, under a table, or some other hiding place. Once concealed, you have to pull the triggers in time with your character’s heartbeat to keep them calm, or else they will be discovered and killed.

The second way is similarly random. Every once in a while, the same dark entity will suddenly start pounding on the other side of a door near your character, and you must run up and hold it shut in a high stakes but relatively easy quick time event. The ease with which these random encounters are overcome makes them little more than an annoying interruption while you’re trying to focus on how to solve the next puzzle. 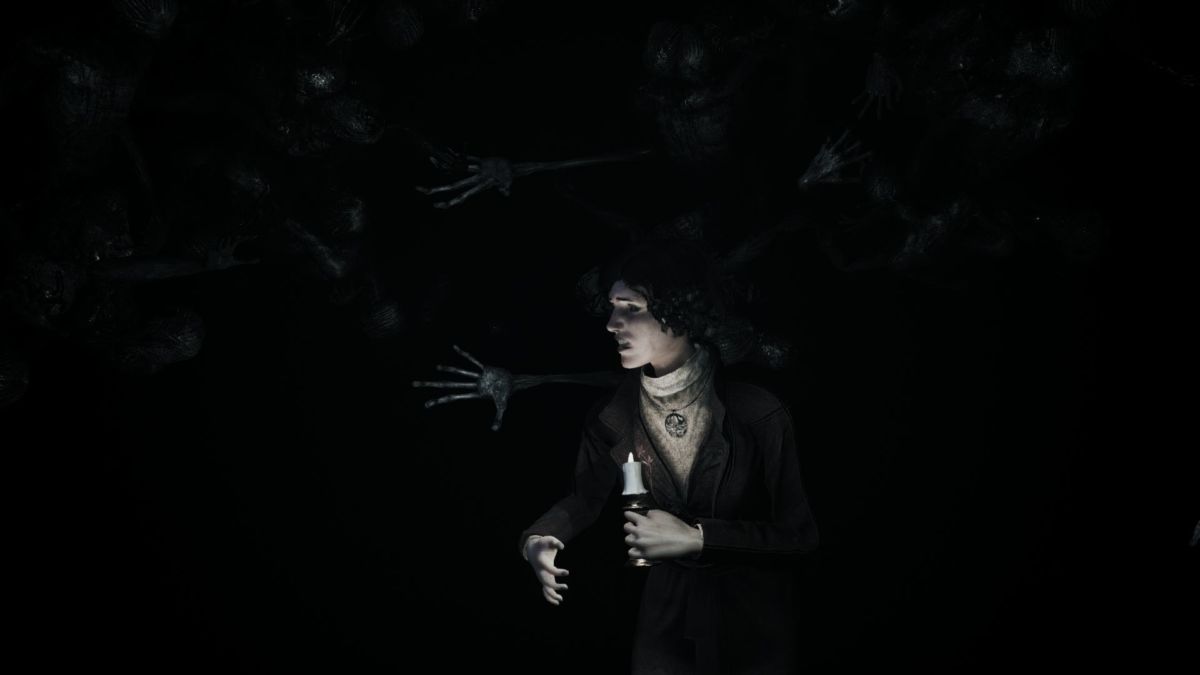 And, of course, what horror game would be complete without sudden environmental jump scares? I lost count of how many radios crackled and doors slammed shut as I walked by them. These instances were pretty much the scariest parts of the game. The more tailored scares were underwhelming and too easily predicted. However, without entering into spoiler territory, there were a few creepy moments that made the rest of them worth the slog.

Despite the rage these death mechanics can cause, they serve an essential purpose that makes Song of Horror stand out from similar, easily forgettable games. In any other horror game, the sense of fear is largely a contrivance. Sure, you can get caught with a good jump scare, but even if it kills you, you’re only going back to the last checkpoint. Not so with Song of Horror, where any misstep might take one of your finite lives. Too many mistakes can send you back to the beginning of the episode, although this isn’t too much of a hassle. Like any other puzzle game, once you know the solutions, it’s a fairly fast and simple process to get back to where you left off.

Song of Horror’s obtuse camera angles, meandering movement, and all too abundant quick time events demand a controller over a keyboard. Its puzzles require your full attention, even if its story and characters don’t. Episode play times can run up to five hours or more, depending on how well you click with the puzzle design. The next three episodes are scheduled to release between December and March, and if they keep to the same pattern, the entire package could reach 25 to 30 hours. Priced at $22.00 for the season pass, Song of Horror offers a reliably good time for puzzle and horror fans alike, as long as you aren’t expecting a novel story.

A copy of Song of Horror was provided by PR for the purposes of this review.

Verdict
An unremarkable story is outshined by engaging, if difficult, puzzles, and a persistently creepy atmosphere.
7
Cultured Vultures is a pop culture website established in 2013 covering all things gaming, movies, and more. We eat your words.
All The News On The Biggest Games