Nobody knew where the first vampire came from, but that didn’t stop them arguing about it anyway. 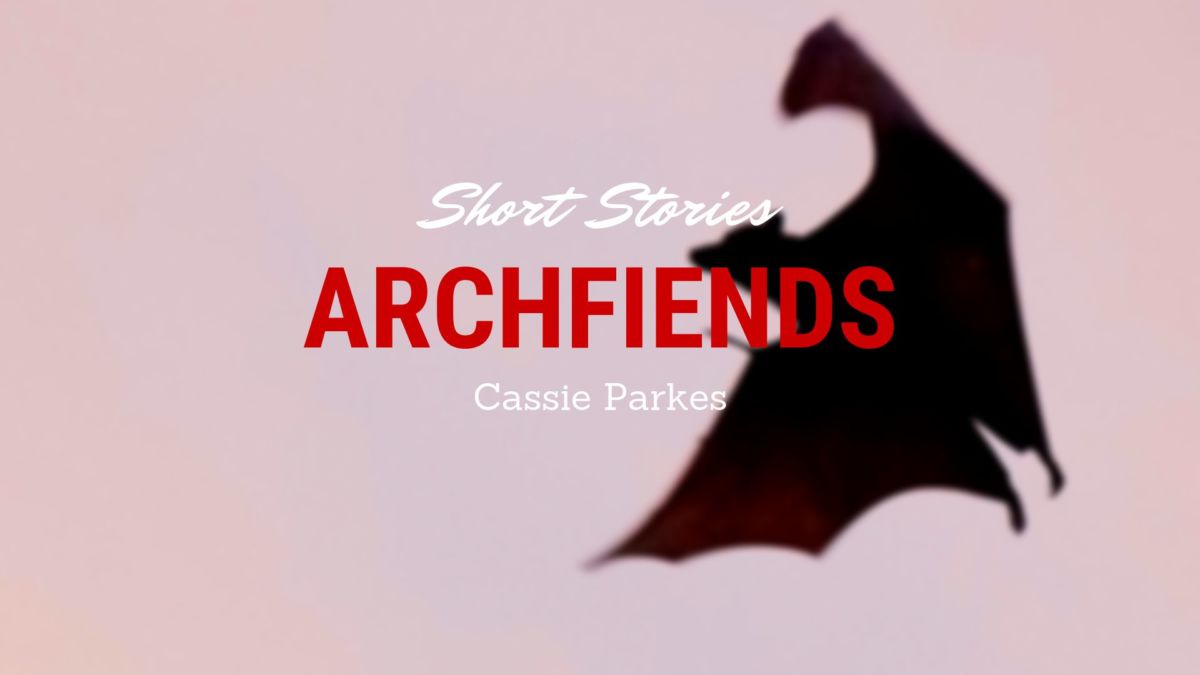 Nobody knew where the first vampire came from, but that didn’t stop them arguing about it anyway. Nowhere was off-limits, even places populated heavily with humans, and it wasn’t unusual to see a pair of vampires baring their fangs and hissing at one another at all hours of the day in pubs or cafes, each one loudly expostulating and daring the other to take the matter outside. To them, it was the closest thing to a religion, and it was the thing that kept them both sane and insane as they argued a truth that they could never prove.

Some thought that vampires descended from beasts the way humans had supposedly come from apes–Mr Darwin’s theories were twisted by vampires into the idea that they perhaps came from vipers or Wolffish, or some extinct beast which had bared similarly pointed teeth. The vampires’ fangs were retractable (excellent for hiding their identities from humans, as, beyond their pointed teeth, they were virtually indistinguishable from them, though their fights did give most humans cause for concern) and their beastly teeth were a source of great contention amongst vampiric kind.

One vampire who did not care at all about her heritage was a lady by the name of Violet Winters. The vampires called her Silver, for she was the only one they knew of who had chosen not to give herself a youthful appearance, and had instead settled upon looking like a woman approaching her mid-fifties. None of them could understand it–they craved fresh blood at every hour to keep their skin smooth and taut, whereas Violet drank only one or twice a year, keeping her brunette hair streaked with grey, and her green eyes dark and bordered by a collection of crows’ feet. She did not care what they said, however, and her once-mocking nickname soon took on a sense of reverence and respect as she made her way throughout the city. She moved in many circles, both human and vampiric, as she secretly held the puppet strings of all London. She bribed judges, seduced aristocracy, made friends with thieves, and killed all those who dared oppose her. Killing vampires was more difficult than disposing of a human, of course. Humans were delicate and fragile–they had brittle bones which were easily snapped and broken, thin blood which was easily spilled, weak necks which were easily wrung. But vampires required something more than mere daggers or rope, and Silver found inspiration in the name which had been given to her, as silver was one of the few things which would kill her own kind. She poisoned them, usually, slipping silver flakes into their food or drink as she watched them burn from the inside out. But when she was feeling particularly gruesome, or if someone had wronged her quite terribly, then she would hold them down and pour molten silver into their gaping mouths, watching as the burning liquid slipped so easily over their fangs, and down their throats. They didn’t have very long to scream.

By the turn of the nineteenth century, she was known as a woman and a vampire to be both revered and silently feared throughout all of London, and anything she desired was hers.

It was because of this that she was so terribly surprised when a young man approached her as she was enjoying afternoon tea, all bright-eyed and hopeful. He could not have been older than twenty, she thought, with bright blonde, messy hair that was in need of cutting, and blue eyes which glistened in the midday sunlight pouring in through the windows of Silver’s private room in the cafe.

“Excuse me, are you Mrs. Violet Winters?”

“Ms,” she replied, placing her teacup upon its doily, and looking the young man up and down with her signature piercing gaze.

“Oh, excellent!” the young man beamed. “I have a message for you!”

She looked to the cafe owner who was stood in the doorway, having let the boy in after he’d so politely explained his situation, and waved him away with a flick of her hand.

“Who from?” she asked the messenger, drumming her pointed fingernails against the wood of her dining table.

The boy smiled a bright, warm smile and then moved to close the door of Silver’s room, slowly dragging a chair up against its handle.

“The Archfiends,” he said, in a low voice, turning to her with a wicked grin.

To most people of London, and indeed the rest of the world, this would have meant very little. But to Silver, it meant a great deal, for the Archfiends had been a persistent pain in her backside. They had made it their mission to hunt her down and destroy her, but not out of some great Christian, anti-vampiric pursuit like one might have assumed. On the contrary, the Archfiends were a gathered syndicate of thieves, fraudsters and murderers who wanted everything that Silver had. And, before her arrival to the city, they had had it all. The Archfiends had controlled each alleyway, each night-time river crossing, each shady deal and each whispered treachery. Silver had only come to London in 1890, having grown quite bored of Paris after all the murdering had slowed down, and the Archfiends found themselves at a loss when she had began to take over their connections and deals. They did not understand how one woman had managed to do what it had taken hundreds of them to accomplish, across centuries’ worth of corruption. She kept her vampiric traits well-hidden, and killed anyone who discovered her secret. She sometimes even drank from them, too, if she found her knuckles beginning to seize up, or her back beginning to curve too far forward.

“How sweet,” she smiled at the stranger, before taking a long sip of tea.

“Not especially,” she smiled, placing her cup back down. “To have come to me in a cafe full of patrons, in broad daylight.”

“It’s not locked,” she sighed. “You just put a chair up against it. I can move the chair aside and open the door.”

“Yeah, but I’m between you and the chair.”

“Oh, darling, you may as well not be there,” she sighed, and stood.

One thing you may not know about vampires is that they were blessed–or cursed, if you believe them all demonic–with incredibly strength and speed, and so in one swift motion, Silver managed to leap up and pin the young man against the wall, holding him up by his throat. His blue eyes bulged as his lips turned to match them in colour, and he began to scratch all the wooden walls with his fingernails, hopelessly trying to claw his way free. She smiled, and studied his face. It was almost cherubic, really, and she loved him for it. Silver was a great fan of anything that appeared sweet and light and pure, but which was rotting and raging within.

He shook his head as much as he could, pleading with his eyes, as his mouth let out only incoherent gasps.

“Oh yes, I am. I am going to kill each and every one of you until you stop following me around the city like a stray hound, begging for scraps.”

She loosened her grip then, and he fell to the floor with a loud thud. He hopelessly rubbed at his throat, which was now bruised and swollen from Silver’s tight grip, and began to crawl towards the door. She lifted her foot and brought the heel of her boot down hard upon his back, leaving him trapped, his thin fingers reaching towards the chair he’d used to block his only escape.

“What did you expect, joining a useless band of murderers and thieves? How else did you think your life would end?”

“I-I never joined! I owed them a favour…w-well, my brother did. But…but then he died, and they…they came after me.”

That gave Silver pause. One thing she hated the most was injustice, and The Archfiends were famous for it, favouring a quick kill more than a worthy one.

That name was familiar to Silver, so she did not press her foot down any harder.

“Got into a drunken fight like an idiot…stole from a bunch of barge-men who were Archfiends…They came after him and killed him, of course, but by then he’d spent the money. So they came after me instead. I gave them the money, but…t-they said I still owed them.”

This much, Silver knew to be true. One of her informants who was positioned by the river had seen the scuffle, and informed her that there would be trouble because of it. They found out his name -Kingsley- but had lost track of what had happened to him after that. She looked down at the young man, still gasping for air, and suddenly felt quite sorry for the pawn beneath her boot.

“My dear boy, they just wanted you finished off…” she sighed, and slowly lifted her heel. “…And they knew I would do it quick, and clean up the mess for them, too.”

“T-Then, please, be swift,” he begged, rolling onto his back. She looked at him – he really did look sweet, and innocent, and that was incredibly useful when it came to seducing aristocrats and getting into places that one definitely should not have been in. Keeping him would create trouble, but she had a lot of that following her already, and she knew how to handle it.

“What is your name?” Silver asked him.

“Well, Aldus, you work for me now,” she hissed, with a grin.

Aldus looked up at her with wide eyes. He knew when he was beaten, and he was equal parts relieved and terrified, especially considering the superhuman strength he’d seen her possess. He knew something was terribly amiss here, and that he was most likely getting himself into much more bother by staying. But if it would save his life, even just for another few hours until The Archfiends caught up with him, he was willing to do anything.

She laughed, and dragged the chair back over to the table as he stood up on shaking legs. They had a lot to discuss, after all.