SHORT STORIES: ‘Steer Into the Sunset’ 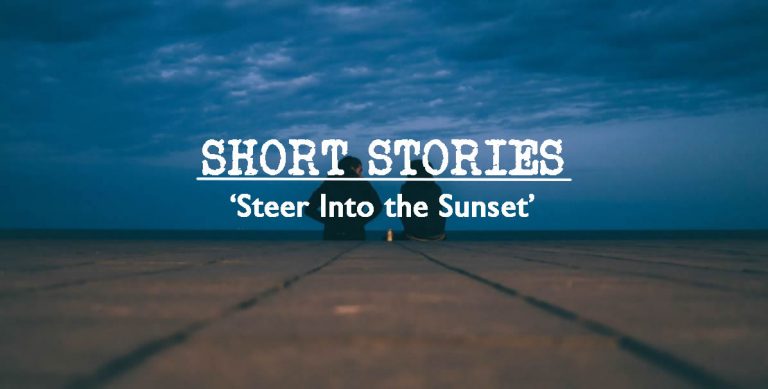 For seven years Marilyn internalized every horrific word said and every hand raised until she could take no more. Each verbal bullet, each slap silently chipped away at the self-esteem she used to know. Marilyn considered the wounds incurred as harsh lessons, concluding that swift, decisive action was inevitable for her protection, her preservation and that of her three young children. At five, four, and one, Marilyn was going to remove them from the battlefield before they were old enough to take any shrapnel.

She calmly packed their lives into tiny duffle bags and several paper boxes. Clothes, memories, toys, kitchenware, emotions were all packed tight into the getaway car where Marilyn’s mom waited. Her mom made the trip to Los Angeles expressly to assist in the jailbreak. Marilyn and her children would soon be back home on the central coast, ushering in brighter days.

“Christ, I really believed I was in love, mom. Guess that makes me the loser.”

“I won’t hear anything of the sort. Falling in love with the wrong person doesn’t make you a loser, sweetheart. It might sting now, but you’ll see this is the right decision. You and the kids deserve so much better.”

You and the kids deserve so much better.

You and the kids deserve so much more.

He’s never there for you.

What if he starts hitting the kids?

Marilyn’s parents and friends had been correct to protest the relationship the entire time and it twisted her insides. Sickness and relief mingled with a supreme anger from seven years of allowing her feelings to fester. Marilyn wondered why she had stayed so long. She experienced no heartache, though. Tony had broken her heart so many times during the course of their marriage all that remained was duct tape and blood.

It was a dry evening with a warm southern California breeze. Marilyn was finishing securing the kids in their car seats when Tony pulled into the covered parking lot behind the low-income town house they shared. As he oozed out of the driver’s side without a bone in his body, it was clear to Marilyn why Tony was a gelatinous mess.

Tony was never discreet about his afternoon delights and rendezvous, and obviously didn’t care to be. He had been with one of his lovers, a young tutee of his after school math program. A tutee whose name was Robert. Tony and Robert would do drugs, fuck, and Tony would return home sometime after dinner disheveled, high, smelling of cigarettes and dried semen.

Marilyn had known since she found a love letter, complete with dick drawing, scribbled on a scrap of paper in Tony’s jeans while doing the laundry. She wasn’t naïve. There had probably been others. She simply decided to turn away from the truth.

The truth raped her senses, forcibly entering her consciousness as she reflected. Tony’s infidelity — while despicable — had merely served as the catalyst. His uncontrollable urges were by no means the sole reason for Marilyn’s departure. For her it was the final straw. The final indignity she would suffer from a relationship beaten, tortured, and left for dead.

Marilyn had spent weeks mentally preparing for this confrontation. She was ready to meet the train wreck head-on despite the butterflies pummeling and drop-kicking her stomach. Tony stood just outside his car with the driver side door open. A look of confusion or betrayal deformed his face. A look which was laughable at best. Marilyn ordered Tony to go inside where they could have a conversation.

“I said get in the house, Tony! We’ll talk there.” The power and authority behind Marilyn’s voice shut down any opposition. Tables had turned, unnerving Tony, sending the scolded child indoors. Marilyn asked that her mom stay with the children strapped in their car seats, ready for the impending exodus.

“Of course, sweetheart. You’re doing the right thing, remember that.” Marilyn’s mom touched her hand, comforting and reinforcing. Marilyn looked into the faces of the children she was rescuing and saw hope.

Marilyn walked to the house and threw open the sliding glass door. Tony stood in the middle of the living room tucking in his shirt, finger-combing his greasy hair, making an attempt to appear presentable for his impending trial. She closed the door behind her, moving in a determined, yet unhurried manner. Marilyn was self-assured and confident for the first time in many years. She was empowered, robust, in control.

“Baby? Now you call me baby? I can’t remember the last time you expressed any sort of romantic sentiment, let alone referred to me with any sort of affection.” Marilyn moved closer to her soon-to-be ex. Her soon-to-be past. “You want to know what’s going on, Tony? I’ll tell you. This sham of a marriage is over. I’m taking the children you never wanted anyway and we’re getting the hell away from you. That’s what’s going on, baby.”

“Spare me, Tony. I had to wait until you were drunk or high just to conceive. That’s all your tiny dancer is good for anyway.”

Under the influence Tony was visibly distraught, red-faced and wild-eyed. Predictably, he only knew how to react with rage. He grabbed any object within reach and hurled items at the walls, at the ground, at Marilyn. Ash trays, dirty plates, glass coasters, all launched from his hands. Fireworks exploded in every corner of the room.

The joke was on Tony.

Marilyn had already packed and removed all of her worldly goods. Everything the possessed catapult in front of her was destroying belonged to him.

There was a time such threatening displays would intimidate Marilyn. She watched the tantrum of toddler proportions, realizing those days had long since passed. She shook her head. Tony was pathetic. Tony was a child. A little boy, frightened and unable to take care of himself. She knew that was what sparked the protest. It had little to do with her liberation.

Adrenaline electrifying her veins, Marilyn marched over to Tony and ambushed him with a slap. A great hard slap, loud and reverberating throughout Tony’s face. He clutched the point of impact and staggered back a couple of feet in absolute shock. Neither one of them knew she was capable of such dominant action.

“Now you’ve done it, you crazy bitch! You’re going to regret ever trying to make me look like an idiot.” Tony tromped up the narrow stairwell, turning toward the master bedroom they once shared. Marilyn heard him opening the closet, ransacking the shelf, finding, and then unlocking his lockbox.

“What the fuck?” The scream echoed down the stairwell. Marilyn smiled as Tony came flying back downstairs. Once he was again in front of her, Marilyn produced the handgun he had been searching for, waving it and teasing.

“Are you missing something, sweetheart?”

“Why don’t you hand over my gun before you hurt yourself?” Tony took a couple of steps toward Marilyn. She raised the Beretta and aimed it directly at Tony, who was no more than five feet in front of her. “You don’t even know how to use that thing, you dumb woman.”

Then a click of the safety, a warning shot fired straight into the air, a high-pitched squeal of terror from Tony. Pieces of ceiling dislodged by the blast fell alongside Marilyn.

“You fucking whore! That isn’t a toy, god-damn it!”

“What did you just call me?” Marilyn brought the gun back in front of her and jammed the barrel directly into Tony’s sack. His demeanor quickly shifted, raising his hands to reveal surrender and fear.

“No! Please don’t!” Tony was blubbering. His eyes closed, his teeth clenched. His fear pleased Marilyn.

“You’re right. Robert would be pretty upset if I made your package any smaller than it already is.” A shade of beet red canvassed Tony’s face. He stuttered a couple of times before finding the words to mold his follow-up.

“How… How long have you known?”

“At least seven or eight months, loving husband. Jesus, you haven’t touched me in years, let alone made love to me. Do you even remember the last time you went down on me? I do. It was our honeymoon, you… You asshole. Not as though your dick is of any use, being hung like a fire ant and all. Apparently I’m just too old and too female for your taste.”

Marilyn floated towards the kitchen, no longer weighted by the years to come.

“But… But, I just -” She was oblivious to Tony’s chirps and clucks.
“How many of those kids in your program have there been, Tony? Two? Four? They’re barely fourteen or fifteen, aren’t they? If I were to turn you in, they may just put you away for a good while. You could be somebody’s bitch. That almost seems too decent of a fate for you, though.”

Marilyn almost had sympathy for the sniveling idiot. Tony was by no means a looker. He was broad and furry, with a large, hopelessly crooked Eastern-European nose, and receding hairline by his mid-thirties. In the moment, she recalled how he had been kind at one time. During his courtship with Marilyn, Tony composed letters and poems expressing love in great detail. The missives were poorly written, rife with clichés and misspellings, but danced and leapt with joy and adoration. He would send small tokens of affection and flowers to Marilyn’s apartment and place of work for all to see, declaring to the world just how much she was loved. Gestures and tenderness which dried up and died not long after their nuptials.

The abuse made its initial guest appearance somewhere around the eight month mark of Marilyn’s first pregnancy. During a discussion revolving around additional children and the possibilities of moving to a nicer neighborhood, Tony sat at the kitchen table following answers with shots. When he was finished with the vodka, he used the gin. When he was finished with the conversation, he used Marilyn’s hand to put out his cigarette.

Marilyn rationalized the violence that followed — slaps escalating to punches, punches escalating to choking — as isolated instances, convincing herself Tony was sincere during his blotto apologies. The apologies faded, ceasing completely after year three or four, while the brutality only escalated. By the time Marilyn found out about Tony’s young hard-on muses, she was already at capacity. Now she wished she could somehow get that time back.

Of course, had she rewound the clock, she would find herself alone again.

Alone and desperate for children.

“You take me for a fool, Tony. And I was, for a very long time. For you I was a convenience marriage to prove to your father that you aren’t some big, faggoty Nancy boy. You’ve always lived in fear of him and I was just your crutch, but unfortunately I loved you. In spite of the abuse, the apathy, the lies, and the pain, I loved you. But I can’t continue to look the other way, pretend that things are great. I can’t pretend you love me anymore, and I deserve someone who does. Goodbye, Tony.”

The melting light of dusk retired the day, along with the last seven years of Marilyn’s life, through the blinds. She placed the gun on the kitchen counter top and removed the townhouse key from her key-ring, winding it around until she was free.