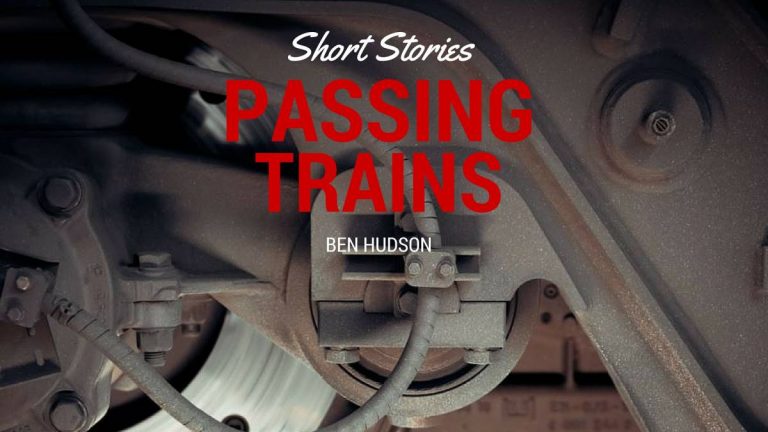 Most high earning professionals chose to take holidays in far flung paradises, but Peter Harris always returned to his home town. The lure of the Caribbean was stale to him compared to the simple Mediterranean charm of the town where he grew up. He did not know why he chose to return each June, but after he returned to work refreshed, having bathed in the glorious monotony of the first wave of summer heat for just long enough to burn off the stale stench of the city.

This particular June was like any other. He sat on the train, rocketing through the south of France, immersed in a copy of James’ “Portrait of a Lady”. It always surprised him that, despite his expensive education, there were shelves and shelves of classics in every bookshop, which remained completely uncharted. Having reached a chapter break, he looked up and out of the window to see that the train had sidled up next to the deep blue of the Mediterranean.

He pushed his head onto the glass, and enjoyed the gentle cold of the glass as he watched the deep orange rocks and the confident azure of the sea disappear behind him. All of a sudden his head drew instinctively away from the window, as the rush of air from a passing train violently diverted his attention from contemplation back to reality. He took a sip of water to calm himself, before returning happily to his book.

Having settled in his hotel, Peter wandered out into the gentle evening heat in which he had passed his youth. He strolled through the tight streets of the city, methodically sifting through his thoughts, occasionally distracted by a sharp twinge of nostalgia caused by a certain smell, sight or sound. It seemed that in the alleys and walkways of the town was the only place he could think clearly, and devoid of any unnecessary emotional shrapnel from his friends and colleagues.

Being in this state of pensive anaesthesia had distracted him from the heat of the day turning into dark clouds, and he was surprised by the arrival of a light rain. Looking up from the uneven paving, he noticed that he was in a part of town he recognised well, having spent many evenings of stagnant drunken stupor there during his final year of high school. He took a left and smiled a rich smile as he saw that the Baretto was still open.

He entered, walked up to the counter, and after a short consultation with the barmaid, was handed a chalice of strong Belgian ale. He sat down at the only table available, which unfortunately was near the entrance, and as he drank down the glass, he was occasionally hit by a blast of stale evening air from the street outside.

While spooling through memories of his high school days, one materialized before him, in the form of Lucile, a close friend of days gone. The years had not changed her, she was still petite, and still retained the kind of beauty which left one in a speechless state of disbelief. Though the years had hardened Peters face, she recognized him immediately, and pulled him in for the requisite kisses on the cheeks. They exchanged superficial summaries of their recent years, before Peter asked what brought her to the Baretto on that particular evening.

“We are here to bid Violette farewell. She returns home on Thursday.”

At that moment, the door opened, a warm wind blew in, and a thin sweat began to form on Peter’s forehead. He turned his head to the door, and saw what he could only describe as the perfect female form. Suddenly Lucile’s beauty faded, and she seemed awfully plain. Peter found himself quite overcome by the olive skinned vision, in a well-fitting white floral dress. The dress was ill suited to the colour of her skin, but the effect she had on Peter was only further testament to her beauty.

“Petey, this is Violette,” said Lucile, gesturing towards the woman. ”Won’t you sit with us Peter?”

He needed no persuasion, and the group, seven in number, walked to a recently vacated table at the back of the bar, where Peter sat down next to Violette. For about half an hour the conversation drifted around the table, and was quite banal. In this time, Lucile had made herself quite drunk on an unfortunate mixture of red wine and sunbathing earlier in the day. As the rest of the group began to amuse themselves listening to Lucile, Peter saw his chance to talk to Violette.

At this, Peter fell silent. He could think of no more to say. The truth was that working such long hours had made him rather shy, and it was only her beauty which had made him take the leap into conversation.

“Is that it?” she demanded.

“My apologies, I find myself short of words in your presence.”

She smiled coyly at the remark, before turning her head to face him.

“So you’re a man of few words, it makes you no less of a man. Simply more of a mystery.”

This made Peter relax, and soon, rather than staring at her sleeve, he lifted his head to face her. They conversed together for a long while, all the time Lucile’s condition deteriorating, and gradually they drew closer to each other. Peter felt at home with her. She was his compete opposite, but that merely meant she fitted perfectly next to him. They agreed on little, but neither resented the other for the contrast, it merely summoned a feeling of respect. Their conversation meandered from subject to subject, punctuated by bursts of laughter from the pair, and as the evening drew in, they both began to feel a warm ebb in their ribcages.

Night had fallen outside, and the amusement at Lucile’s condition had turned to a sense of maternal concern in the rest of the group.

She rose, and a second later so did he.

“When do you leave?” asked Peter.

“Would you care for dinner one evening?” ventured Peter.

“What would be the point? If it is meant to be, we will meet in the week. If we bump into one another, I will consider fate’s proposal.”

Peter conjured up a brave smile to hide the sigh which would have otherwise escaped. She kissed him gently on the lips, before elegantly deserting the bar, and disappearing into the night. Peter’s heart wrenched, and continued to do so throughout the night. He lay awake, his eyes burning from the brightness of her eyes, and after a while went to sit by the window, and delved back into his novel.

Peter tried not to be affected by the evening with Violette, but her gentle features continued to appear in the faces of passers-by on the street. His holiday was not unlike his previous in substance, he strolled aimlessly through the dusty city, but in emotion it was greatly altered by her appearance. He could not clear his head. He could not relax due to the odd cocktail of fear and hope for her arrival. Each evening he found himself in the Baretto, drinking the same ale, but his attention to his novel was lost. Violette had filled every empty space.

Come Wednesday evening his hope of seeing her again had faded somewhat, and his usual patterns of thought had begun to return. He flicked back two hundred pages in his book, as he had found himself lost on his return to emotional sobriety, and, once again in the Baretto, he buried himself in the pages.

He became so transfixed by each paragraph, that he noticed not when Violette sat down at the table, wearing the same dress as the previous Saturday night.

Peter’s mouth fell open and his heart leapt. He tried to speak, but choked helplessly on his emphatic emotion.

“What a coincidence that you might be here, when I come to search you out.”

Peter remained speechless, but had regained enough composure to lean over the table to kiss her softly on the cheek.

“If you don’t offer me a drink soon, my throat will become so parched, that also I will find myself mute. And that would make for rather one sided conversation.”

Peter rose and walked unsteadily over to the bar. He propped himself up on the varnished wood and ordered her what she had been drinking on the Saturday. His mind raced again, but he took a sip of his next beer, and composed himself.

“I haven’t stopped thinking about you,” Peter said on his return to the table.

“Nor I,” said Violette, “yet the more I think of you, the more our unfortunate circumstances gall me.”

“What do you mean?” asked Peter. “My passion for you stretches far beyond these perceived confines.”

“It will not work out Peter. I know better than you. Experience makes one rather wise on such subjects. The idea of “us” is pure fantasy”.

Peter paused for a moment. “Why couldn’t we be together? I could chase you through Europe. My work is nothing compared to what I feel for you.”

Violette Smiled weakly. “You barely know me Peter. You are fabricating a fantasy around the few things you learnt about me at the weekend. I can actually be rather a drag. It’s not love. It’s just loneliness.”

“Nonsense! I’ve never felt such a connection as I did!”

“Grow up Peter! I’m just a woman you met one time. There is no space for anything other than a cheap acquaintance, and a sense of melancholy in the future. It isn’t meant to be. All you can do is remember me fondly.”

“But the distance is too great. And you are tied, and so am I. I wanted to say goodbye. That is the only reason I came.”

Peter gripped his glass hard. He had never felt such a rush of contrasting emotions. He reached across the table and grabbed her hands.

Her soft fingers slipped out of his, and she looked deep into his desperate eyes.

“I bet you’ll forget me,” he offered bitterly. At this she took a large mouthful of her drink, before striding towards the door. Peter collapsed onto the table, knocking his empty glass over. He stayed there for a few minutes, comfortable in the shelter of isolation. That evening, he went to the train station and booked an early train home, and the next morning he left. He never returned to the Baretto.

Violette never entirely left Peter’s thoughts. Whenever he felt alone, the memory of her comforted him momentarily, and then pushed him deeper into himself. Even in his later years when married, he still thought of her from time to time, when he was unhappy, or whenever he returned to his hometown. Though she never quite left him, true to his prediction, the whirlwind of Violette’s life soon forced her to push Peter to the back of her mind, where he rested among the other men who became besotted by her free spirit, and were left behind. Within a year she had forgotten him entirely.