We love a good mismatch. 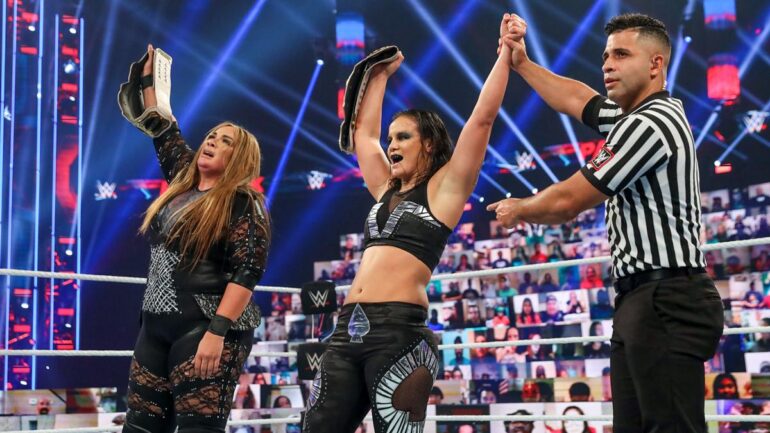 WWE surprised everyone by announcing that their Network event, Payback, would be taking place exactly one week after SummerSlam, instead of the usual one month between Network specials. An unfortunate but unavoidable consequence of this is that the matches that were to take place on the card did not receive much build and so could not carry much weight in the eyes of the viewers.

These same fans would then be shocked to see not one but three title changes on the night. Lashley took the US Title from Apollo Crews, Roman reigned supreme in the main event, and Shayna Baszler & Nia Jax dethroned Bayley & Banks to become Women’s Tag Team champions.

The women’s match in particular was great and ended with ‘The Submission Magician’ trapping both Bayley and Banks in dual holds and forcing the champs to tap out. This new pairing now runs the women’s tag division, and this could be exactly what it needed.

The women’s tag division has never been very sizeable and so has suffered recently with the departure of one half of The Kabuki Warriors in Kairi Sane, thereby disbanding one of the most prominent teams in the championship scene. To cope, much like they did for the Elimination Chamber match to crown the inaugural champions in 2019, WWE has thrown together a team and thrust them into the title picture; this time the unexpected allies being Shayna Baszler and Nia Jax.

While this idea of pairing two superstars who aren’t doing much isn’t always great, it is absolutely necessary right now; WWE has been forced to build up new key players for all of their divisions due to some of their talent being unable to work or having been released because of the pandemic. Making a new team to challenge for the titles only to end in failure would not do much for the division, but having that newly formed team win is a much needed shot in the arm. It will not only mix things up and keep viewers interested, but also serves to establish the team and help expand the division further.

The ‘tag partners that just don’t get along’ trope is a long withstanding one in the wacky world of wrestling, and it can be very hit or miss. Fortunately, this pairing has already proven to be a hit.

Shayna and Nia showed on Sunday that they make a great team. The story of the match was told with all four competitors playing their roles to perfection; Baszler and Jax would dominate their opponent one on one until the established team would use their tag experience to gain an advantage over the newcomers.

There was animosity between the challengers before the match and miscommunications occurred during it, but by the end the reluctant partners realised they could pull it off if they learnt to work together, and were able to do just that and get the job done.

The small amount of teamwork shown in the match and the comically uneasy post-match interview and photoshoot has shown hints that Shayna and Nia may have good chemistry and have certainly managed to bring a charm to the unlikely partners cliché so far. It will be interesting to see how they progress throughout their reign.

A good role for Nia

Nia Jax has been accused in the past of being somewhat careless with her opponents, with that unfortunate reputation being cemented upon the injuring of Becky Lynch in 2018 and being reinforced after Kairi Sane also suffered an injury in a match with her earlier this year. Nia works as a dangerous monster who uses her raw power to throw her opponents around – which is fine in short amounts for squash matches, but doesn’t always work as well in full length contests.

Putting her in a team could be the solution to this. As seen at Payback, both women know how to play to their strengths; Shayna provided most of the offence with her grappling and striking, and Nia would then come in and steamroll through whoever was in her way. This is the best way to showcase Nia as a monster powerhouse as she can work in short bursts, her opponent can tag out after bumping for her, and the match can continue in the unfortunate event that something does go awry without requiring the hurt competitor to continue wrestling.

Nia has the ability to really shine in this role of the big bulldozer in the team that makes the hot tag and takes on both opponents simultaneously after the harder working Shayna has been worn down, and this is surely the most effective way to utilise ‘The Irresistible Force’.

The best part about Nia and Shayna taking the championships from Sasha and Bayley is that it furthers the descent of the team that formerly held all the women’s gold. The friendship of Bayley & Banks was put into question with Sasha winning a challenge between the two shortly before SummerSlam, and then going on to lose her singles Championship at ‘The Biggest Party of the Summer’ while her partner retained hers.

Now with their loss of the Tag belts, the ‘best friends’ have no reason to stay together and so another feud between the two is inevitable. ‘The Boss’ and ‘The Hugger’ always put on a great show, and a new dimension would be added to their rivalry since the two have been teaming for a while now and therefore “know each other better than ever”, as the commentators will surely hammer home.

It was good to see a Women’s Tag Title match showcased on the main card of a PPV, and Shayna Baszler impressed as always. It will undoubtedly be entertaining to follow this duo as they grow as a team and attempt to lock down their spot at the peak of the tag team mountain.