The only thing they fear is Wang. 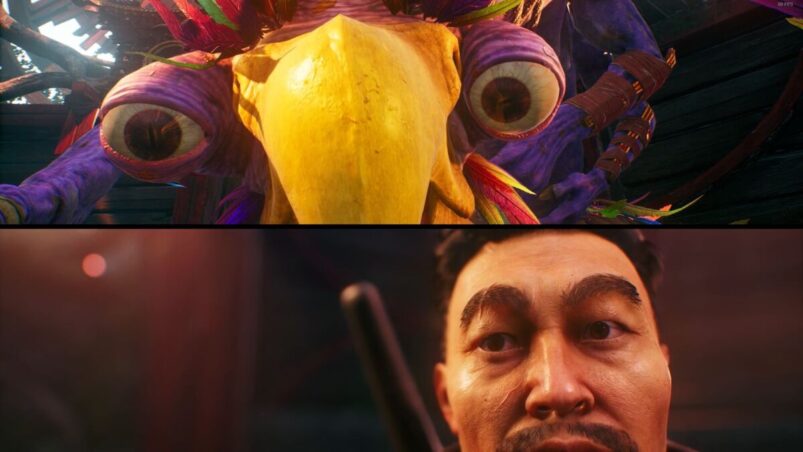 As someone who’s played through DOOM Eternal‘s campaign five times and ranks it as one of the best FPS games ever made, Flying Wild Hog’s Shadow Warrior 3 made me feel immediately at home. It’s fitting that this Shadow Warrior of today takes just as much inspiration from DOOM as its predecessor did and while it’s not quite at the same level, Shadow Warrior 3 still has some ideas of its own to make it more than a simple DOOM clone.

You once again play as (the mysteriously younger and hairier) Lo Wang as he seeks to get his mojo back after being bested by a magic dragon. That’s it. That’s your lot. There’s all the reason you need to start dual wielding machine guns, pulling eyes out of heads, and spouting off one-liners like a vengeful, sentient Penguin bar. While Shadow Warrior 3 makes an effort to be cinematic with some rather eye-catching and often funny cutscenes, it’s the epitome of guilt-free blasting.

That blasting is as raucous as its biggest inspiration, arguably even more so. There’s rarely any amount of enemies on-screen that feels immediately manageable, but once things kick into gear and you find yourself using the full array of Wang’s arsenal, it’s hard to believe he ever lost his mojo. While the game stops short of having a BFG (something that it references), it does gives you a shuriken launcher, grenade launcher, and beefy shotgun, though my personal favourite has to be the starting handgun, the Outlaw. It feels incredibly satisfying to fan the hammer, pinging off headshots and clearing out hordes of demons, especially when you upgrade it to start exploding heads.

Shadow Warrior 3’s depth really comes from its upgrade system, which allows you to pour points into your weapons and the Wang himself. These points are discovered out in the world or by completing challenges, though it’s worth mentioning that Shadow Warrior 3 isn’t a live service or co-op focused game like its predecessor. It’s a linear game with a beginning and end, which feels very refreshing and like a throwback to FPS games of old. It’s also just generally nice to have a game that you know you can dust off in a day, though those wanting some longevity might be disappointed to learn that it’s only 6-8 hours long.

That time does fly by with a game this fun, though. Shadow Warrior 3 is a whirlwind of ultraviolence with Wang able to dash around arenas and swing from grappling hooks to rain down death from above, with players also able to pull of the game’s versions of glory kills. While their animations aren’t quite as gnarly as DOOM’s, they’re actually more interesting, as certain enemies will give super powerful weapons for punching their face all the way in. Whether it’s a homing eye that works kind of like Yondu’s whistle or a freeze grenade that lets you clear out mobs in no time, Shadow Warrior 3 definitely gives you plenty of tools of destruction.

There’s also a quickness to the combat that only really id Software and Hakita can match, both in terms of how fast you can move and how fast you can get hit. Players can use their katana on adds to get back ammo before hopping and dashing while quick swapping to deal with specific enemy weaknesses. Just like Eternal, Shadow Warrior 3 will have you making full use of your arsenal, though it does seem to be significantly more forgiving — FPS veterans may want to crank the difficulty up.

Away from the combat, there’s platforming that again feels very reminiscent of DOOM Eternal, with the game even alluding to as much in dialogue. It’s nothing too complex, a wallrun here, a ladder vine there, and while it’s fun and varies things up, I can’t say I ever looked forward to it as much as the combat. It’s also a shame that where DOOM Eternal really seemed to pack every corner with some secret, Shadow Warrior 3 doesn’t seem to be as keen — unless, of course, they’re so secret that I just haven’t found them.

It’s also worth mentioning that these platforming sequences were where I found most of my problems with Shadow Warrior 3. Not only can it feel generally finicky for Wang to actually “connect” with a traversible section of the environment, some of them just go on for far too long, kind of like when you build a really elaborate ride in Theme Park without thinking if it’d be actually fun to be on as you attach more and more pieces to it. One of these platforming sequences also saw me lose all of my progress due to a quite nasty bug. However, Flying Wild Hog fixed this issue in probably the fastest time I’ve ever seen from a studio — I’d expect any other issues to get ironed out pretty quickly. They really seem to love Wang, and want to make sure you can hang with Wang without saying dang.

I just realised how difficult it must to be come up with Wang puns for decades.

Shadow Warrior 3 is really just a fuss-free thrill, especially for those pining for more DOOM Eternal. Sure, there’s not much originality here, which the game seems to wink and nod to the camera about often, but Eternal is one hell of a game to take inspiration from, with Shadow Warrior 3 offering similarly bloody and frenetic, if slightly disposable, fun. Rip and pun, until it is done.

A Steam key was provided by PR for the purposes of this coverage.